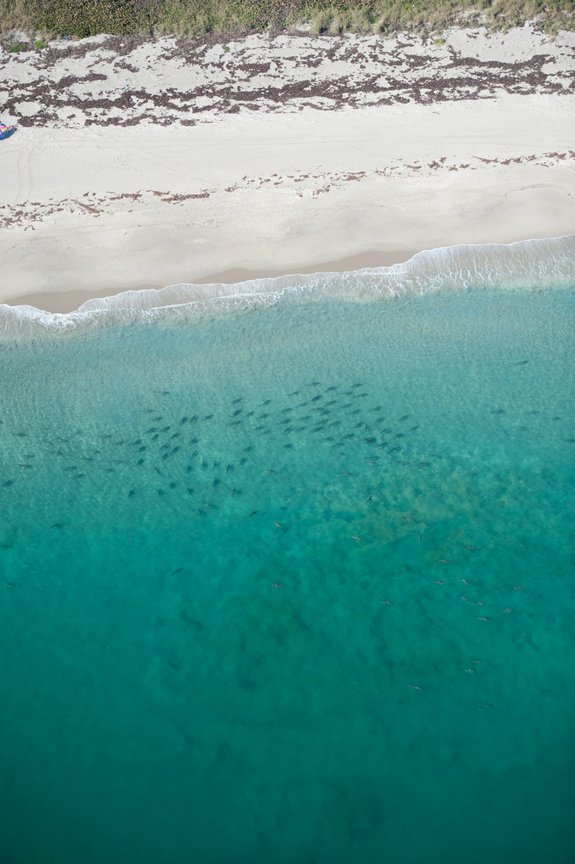 Approximately 10,000 to 12,000 blacktip sharks are currently swimming off the Florida coast, but while these numbers may seem menacing, shark researchers say it's not unusual to see these animals -- visible as tiny dark spots in aerial photos and video -- in the area at this time of year.

These annual visitors are there to feed on fish and bask in warm coastal waters, according to Stephen Kajiura, a professor of biological sciences at Florida Atlantic University who conducts a survey of the migrating sharks every winter. And don't panic -- these sharks typically have little interest in people, Kajiura told Live Science.

Visitors to those beaches could even catch a glimpse of the blacktips breaching, leaping out of the water "like dolphins," Kajiura said. [On the Brink: A Gallery of Wild Sharks]

Kajiura began surveying the blacktip sharks in 2011, counting them after they migrate to south Florida during the winter. He said these numbers are typical during the peak of the blacktips' winter sojurn in the area, which begins in mid-January and lasts until the end of March.

The sharks, which grow to about 6.5 feet (2 meters) in length, spend their summer months near Georgia and the Carolinas, where they mate and birth their pups, Kajiura said.

During their Florida stay, these colonies of blacktip sharks, so-named for the distinctive black markings on the tips of their dorsal fins and tails, gather in coastal waters stretching from Miami to Jupiter Inlet, covering a distance of about 80 miles (129 kilometers).

And the 10,000 to 12,000 estimate represents only the sharks that are visible in the narrow band of water about 660 feet (200 meters) from the shore, Kajiura said, and is "a gross underestimate" of how many sharks there are in total.

To conduct the surveys, Kajiura mounts a high-definition video camera and a digital still camera to point out the window of a small plane as it flies adjacent to the beach. He later downloads the stills and footage to count all the visible sharks in the water.

"We see lots more sharks on the other side of the plane, so there's a lot more out there that we're simply not counting in the survey," Kajiura told Live Science. "We simply don't know how big this school is, how far it extends off into deeper water," he said.

But people have little to fear from these seasonal visitors, Kajiura added. They feed on small, shiny fish, so swimmers should avoid wearing reflective watches or jewelry that might be mistaken for the sharks' prey. And when the water is murky or when it's dark out, a shark may be more likely to confuse light signals from human movement with prey activity.

Otherwise, "they're not curious types," Kajiura said, and as long as people exercise common sense and don't harass the sharks, the blacktips will likely just avoid them completely.

And lucky beachgoers might even catch a glimpse of the colony without ever entering the water.

"You can literally sit on the beach and you can watch the blacktips jumping and spinning and splashing back into the water," Kajiura said. "They're not out to get you, you're not part of their diet, so you may as well go to the beach and enjoy the phenomenon."