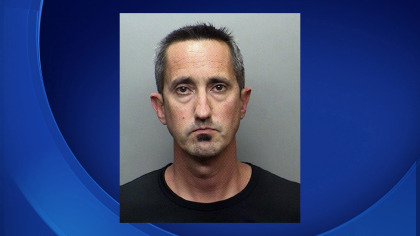 DENVER - A woman who went to the hospital with severe abdominal pain on Christmas Eve 2013 remembered feeling "out of it" after getting a dose of morphine. But as she came to, she realized her hospital gown was open and a male nurse was touching and kissing her.

The woman said she lay still, seemingly frozen. She says when she was discharged, her nurse, Thomas Mark Moore, told her "I'll find you Sweetie."

She told nobody, even when Moore sent her a Facebook friend request days later. A year and half after her discharge from Poudre Valley Hospital, she reported Moore to police in Fort Collins, an hour north of Denver.

That report in August set off an investigation that turned up eight other women who alleged that Moore, 43, had fondled, groped or kissed them at hospitals in Colorado and Nebraska over a two-year period, according to court documents.

Moore's case highlights how easy it can be for nurses who are fired or forced out of their jobs over alleged misconduct to find work elsewhere, in part because some states - Colorado is among a handful - don't require hospitals to report nursing law violations to regulators. Colorado's nursing board also doesn't have the power to conduct criminal background checks for license applicants.

The hospitals apparently knew about some alleged misconduct by Moore. He was terminated from three hospitals before he was arrested and a Nebraska hospital reported an unspecified incident involving him in 2013 that never led to charges. But without any prosecution pending, it doesn't seem that they shared the information with other facilities.

He also held nursing licenses in Alaska and Wyoming.

Lawyers representing Moore, who is due back in court Monday on some of the allegations, did not return telephone calls seeking comment. Telephone numbers for his home and for possible relatives have been disconnected, and he did not respond to a letter sent to him in jail. The Associated Press generally does not name victims of alleged sexual abuse.

Brie Akins, executive director of the Colorado Coalition Against Sexual Assault, said sex offenders often go undetected because most victims don't go to authorities because they don't want to be subjected to scrutiny and they may blame themselves for what happened.

"There is still a lot of shame around that," she said.

In Moore's case, Akins said, some of the women also may have wondered whether they would be believed since they were under the influence of painkillers.

But even when the patients risked speaking out and authorities were notified, nothing happened.

Regional West Medical Center in Scottsbluff, Nebraska - a city of 15,000 in the state's panhandle - reported an unspecified complaint involving Moore and a female patient to police in June 2013. No charges were filed at the time, but it's not clear why. Moore is now charged with abusing three women at the hospital in 2014 and 2015.

In August 2014, a woman told police that Moore had tried to grope her breasts a few months before at the Greeley Emergency and Surgery Center in Greeley, an agricultural and college town about 35 miles from Fort Collins. She wanted to warn authorities but didn't want to press charges.

However, after Moore was arrested in the Fort Collins case in December, Greeley Detective Dave Arpin contacted her again. Since other women had stepped forward, she decided to pursue charges too.

In Colorado, complaints to the nursing board are confidential and officials say they can't even confirm whether a complaint exists. Any disciplinary actions taken as a result of a complaint, however, are made public.

Citing those regulations, a spokeswoman for the Division of Regulatory Agencies, Rebecca Laurie, refused to say how many complaints were filed against Moore while he worked in Colorado.

After police began investigating the 2013 case in Fort Collins, a nursing board investigator told a detective that Moore was fired after two complaints against him at the Greeley Emergency and Surgery Center in March 2014 and April 2015, court records state.

Moore also once held a license to work in Alaska but, according to records there, agreed to surrender it in March 2014 amid an investigation into "undisclosed convictions on his license application." The state denied a request from The Associated Press to disclose the details.

Last year, before his arrest, Moore was fired from the company that owns the Poudre Valley and Greeley hospitals and also lost his job in Nebraska. The hospitals will not say why he was terminated.

Still, he was able to get a nursing license in Wyoming and find a job at a Denver-area hospital. North Suburban Medical Center said it hired an outside firm to do a background investigation on Moore, including checking with his previous employers.

He lost that job after his arrest, and his Colorado nursing license was suspended. Wyoming's nursing board eventually suspended his license there after being notified of his arrest through a national database of information shared by boards.