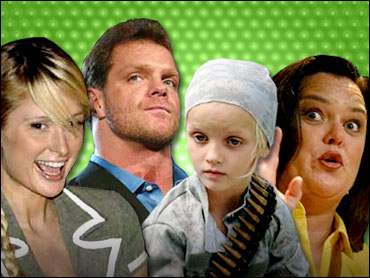 It was a week of unexplained behavior and interesting announcements.

Was it steroids that led professional wrestler Chris Benoit to kill his wife and son — and then himself? Why was his Wikipedia entry updated with the information that his wife was dead hours before police discovered the bodies? Those are just some of the many questions surrounding this tragic story.

What prompted Rosie O'Donnell to post a photo of her daughter wearing a toy ammo belt on her blog? Only TheShowBuzz.com got the explanation directly from O'Donnell.

Has Paris Hilton's jail experience changed her for the better? She walked out of the joint early Tuesday morning and then the next night she answered that and many other questions during a much-ballyhooed Q&A on CNN's "Larry King Live." Whether she answered his questions honestly was a hotly debated topic at water coolers around the country the next day.

Is a Spice Girls reunion what you want, what you really, really want? The former members of the late 20th-century girl group seem to think so, and that's why they revealed this week that they're reuniting for a concert tour. Girl power!

Why did the producers of ABC's "Grey's Anatomy" decide not to renew Isaiah Washington's contract? The African-American actor told Newsweek that the real reason was his race, not his use of an anti-gay slur.

Will Lindsay Lohan be coming out of rehab this week? Lohan checked into a rehab facility after a wild Memorial Day weekend, but her mother explained this week that the young actress won't be leaving after 30 days as expected, but instead will be extending her stay there.

Is Usher going to be a daddy? The answer is: Yeah! The pop star and his fiancée, Tameka Foster, are expecting a baby in the fall.

What's basketball star Tony Parker doing to help fiancée, actress Eva Longoria, plan their wedding? He says not much. He admits, though, that he did have a hand in selecting the music and the food. The wedding is said to be taking place in his native France next week.

Where would the first pictures of Tiger Wood's new baby girl appear? The golf champ decided to unveil the first portraits of his sleepy little 1-week-old daughter Sam Alexis on his Web site.

Does Nancy Grace have a warm, maternal side? That is correct, your honor. The 47-year-old former prosecutor is a pit bull when she's ranting about criminals, but she'll soon be cooing to a pair of little ones because she's expecting twins.

Finally, the question of who would be the top pick of the NBA Draft was answered Thursday when the Portland Trail Blazers chose Ohio State center Greg Oden with the first selection. The big guy also answered our questions about his new role as spokesperson and cover model for the "College Hoops 2K8" game.