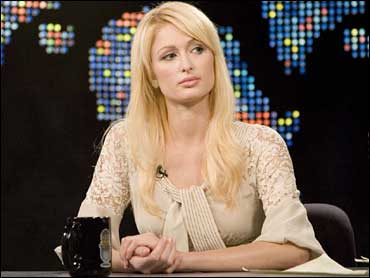 Being locked in a cell was a "traumatic experience" and something she never expected after driving with a suspended license, a subdued Paris Hilton said on CNN's "Larry King Live" on Wednesday.

During the interview, Hilton, in toned-down lace, spoke softly as she sat across from King.

"I've been through a lot," said Hilton, her blond hair cascading across her forehead. "And it was a pretty traumatic experience, something that I really have grown from."

Photos: Paris Gets Ready For Her Close-Up

Asked why she was going public about her experience, she told King, "I just want to let people know what I went through." It was her first broadcast interview since being released.

She added that going to jail was the last thing she expected when Superior Court Judge Michael T. Sauer ordered her to his court in May for violating probation in an alcohol-related reckless driving case.

"I was walking in there assuming I was just going to get community service," Hilton said. "That's what my lawyer said at the time. So when he sentenced me to that much time in jail it was shocking, because that doesn't happen, ever.

"It wasn't for DUI, it was for suspended license," said Hilton.

The heiress revealed that her red carpet visit to the MTV Movie Awards the night she entered jail in early June was a ruse to throw off the press.

"Actually, I was playing a trick on everyone," she said. "Because outside my house, outside the Lynwood facility, there were paparazzi, I heard, from all around the world. So I thought, if I went to the MTV Awards, snuck out during the show, I could get there unnoticed. And that's what we did. No one even saw me going in... I don't want to cause a whole media circus going in."

She described Spears as "sweet" and a "good mom," who "loves her children."

Hilton is concerned for Richie, who is now facing the possibility of serving time for a DUI. "She's like my sister," said Hilton. "I love her so much and I don't want anything bad to happen to her."

She said she wishes only the best for Lohan, who is currently in rehab, and agrees that she's talented. Asked how well she knows the young actress, Hilton said simply: "I know her."

A few minutes later, King asked whether Lohan had any friends in rehab, and Hilton said "no."

2
More than once, Hilton stated that she thought her experience in jail had changed her for the better.

"I feel like God does make everything happen for a reason," she said. "And it gave me, you know, a timeout in life just to really find out what is important and what I want to do, figure out who I am. And even though it was really hard, I took that time just to get to know myself."

She said that she read the Bible frequently while in jail. Asked by King to name a favorite passage, she replied: "I don't have a favorite."

Reading books and writing pages of notes kept severe claustropobia at bay, Hilton said. She read some of her notes on the show, including one passage in which she talks about the predicament of many of her fellow inmates.

"I have compassion for those I left behind at the prison," she read. "I am lucky enough that I have a home and a family to go to when I get out of here. Most of the women in here don't have that option. They have to go back on the streets and some of them end up even back here because they don't have anywhere else to go."

"I want to help set up a place where these women can get themselves back on their feet," she continued. "A place with food, shelter and clothing and programs, kind of a transitional home. I know I can make a difference and hopefully stop this vicious circle of these people going in and out of jail."

In another passage from her writings, she is philosophical about her own situation.

"They say when you reach a crossroad or a turning point in life, it really doesn't matter how we got there, but it's what we do next after we got there. Usually you arrive there by adversity, and then it is then and only then that we find out who we truly are and what we're truly made of," said Hilton. "It's a process, a gift and a journey, and if we can travel it alone, although the road may be rough at the beginning, you find an ability to walk it. A way to start fresh again. It's neither a downfall nor a failure, but a new beginning."

Hilton called her own release from jail shortly after midnight Tuesday "one of the happiest days of my life."

"It's hard to even describe. It was so exciting," she said of walking past a gauntlet of reporters and photographers to an SUV where her mother and father were waiting for her.

"It was just pandemonium, and then as soon as I saw my mom, I just ran to her to go give her a hug."

3Hilton faced another gauntlet when she arrived at CNN's Los Angeles studios, with paparazzi shouting, "Paris, we love you!" and asking what she had learned in jail.

Hilton, wearing oversized, white-framed sunglasses, didn't reply but waved demurely to the crowd before turning and walking into the studio.

Hilton's path to jail began Sept. 7th, when she failed a sobriety test after police saw her weaving down a street in her Mercedes. Hilton, who said she was hungry and on the way to get a hamburger, pleaded no contest to alcohol-related reckless driving and was sentenced to three years' probation.

In the months that followed, she was stopped twice by officers who discovered her driving with a suspended license. The second stop landed her in court and then in jail.

Being strip-searched in jail, Hilton said Wednesday, was "the most humiliating experience of my life."

She said letters from fans and supporters from around the world, including U.S. soldiers in Iraq and people as far away as India, helped her get through the 23 days in lockup.

All of the letters were positive, she said, adding that reading them in her cell sometimes reduced her to tears.

As for the food, Hilton said it "was horrible. It was jail food, it's not supposed to be good... Lunch was basically a baloney sandwich. They call it 'mystery meat.' It's pretty scary. Two pieces of bread and some mayonnaise."

Asked about her reputation as a party girl, the Hilton said she is a social person who loves music, dancing, and going out, "but a lot of people don't know that I'm a business person. I run several businesses."

She pointed out she has a successful reality TV show, has made movies, recorded an album and written a best-seller.

Hilton, who said she supports herself and doesn't take money from her parents, also acknowledged it may be time to cut back on her partying.

"I'm frankly sick of it," she said. "I've been going out for a long time now, and yeah, it's fun, but it's not going to be the mainstay of my life anymore."

She said she eventually hopes to marry and have children.

"When I have a daughter I have a lot of good advice for her," she said.