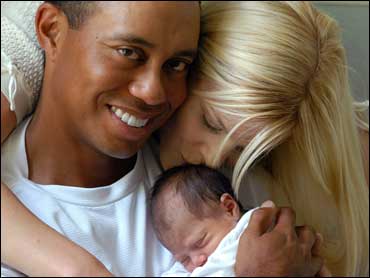 Tiger Woods has posted the first photos of his week-old baby girl on his Web site.

One photo shows Woods seated while holding a snoozing little Sam Alexis in his arms. Mom Erin Nordegren stands behind her husband, hugging him as she leans over and plants a gentle kiss on her daughter's head.

In another photo, the Woods family is joined by their two dogs, the family's playful white labradoodle Yogi, and a border collie named Taz who gets a nice scratch behind his ears from Tiger.

The remaining two photos show little Sam in her father's hands and another of her solo, seemingly unfazed by celebrity as she dozes through the entire photo shoot.2

The Woods welcomed their daughter on Monday, June 18. The birth came hours after the golfer finished in a second-place tie at the U.S. Open.