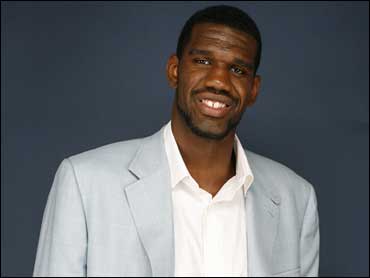 With predictions of being the first pick at the NBA Draft predictions that came true Thursday night when he was taken No. 1 overall by the Portland Trail Blazers one might think center Greg Oden would be a little less than humble.

But that's not what you get from Oden he's still the down-to-earth, boy next door.

Oden, who graces the cover of 2K Sports upcoming "College Hoops 2K8" after leading Ohio State to the NCAA championship game as a freshman, sat down Wednesday with Gamecore in New York at an event sponsored by 2K to discuss his favorite games, what it's like to be a celebrity, and his anticipation of the draft.

He relished trying out the game for the first time, talking back to the computer and delighting in dunking on himself.

"I had fun playing right now. I really got into it," he said. "I wanted to beat him so bad, that best part was dunking."

Oden, who is also the official spokesman of "College Hoops 2K8" plans to be at his local electronic store when the game comes out in the fall.

"It feels great being on the cover; once it's released I can see people at stores and convince them to buy it. I want to point out that handsome man on the cover," Oden said as his infectious laugh filled the room.

A self-described expert gamer for some time, Oden said he's only played "The Simpsons' Road Rage" from start to finish. He's also an avid fan of racing games because "it doesn't take much thinking. You just hit one button and move."

Conquering a difficult game isn't the biggest challenge Oden faces as a gamer. The seven-foot center's toughest struggle is finding a console that fits comfortably in his large hands.

"I gave up on regular PlayStation; but X-Box and PlayStation 3 are good, I like those," he said.

Oden enjoyed his first-ever visit to New York City, site of the NBA Draft, even if he was recovering from a cold and didn't get out much. When he did manage to venture out a block away to his family's hotel, it was a three-ring circus.

"I had to take three different streets to avoid the autograph seekers," Oden said.

At his height, it's even harder to blend in.

"I try so hard, but you know what happens someone stops you and are just like 'you're tall. Can I take a picture with you?' and I can't be mean and then someone else looks and sees you taking a picture and now you get recognized and its 'Hey Greg.' Soon the taxi drivers are looking and all around me it's 'Greg, Greg.' So I'm trying to stay low this trip."

So what's in store for Oden following the draft? For now he's holding off on a celebration, and stepping right into his new role, NBA star. But eventually he would like to have some fun.