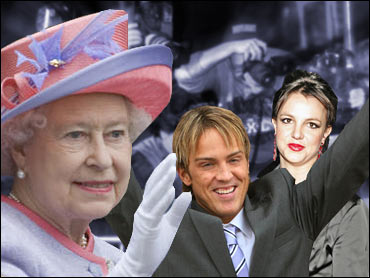 From everybody's favorite pop tart to the Queen of England herself, the famous and the infamous alike were on the move this week.

Britney Spears made a comeback of sorts when she appeared on stage at San Diego's House of Blues for a 15-minute performance. Billed as the M&M's (moms and misses, apparently), Spears also made an appearance the following night at a club in Anaheim.

Katie Holmes can come and go as she pleases, says her pal Jada Pinkett Smith. Smith says the rumors are false that Holmes' hubby Tom Cruise is keeping his young wife a prisoner in her own home.

Paris Hilton could be going to jail for 45 days, if Los Angeles prosecutors have their way. Prosecutors want the heiress to stay off the sauce for 90 days and wear a monitoring device to make sure she stays sober.

Brown, meanwhile, is going to court to seek a DNA test from Eddie Murphy, who she says is the father of her new baby Angel Iris Murphy Brown.

Also exiting stage left this week was former "Cheers" star John Ratzenberger, who danced his last number Tuesday on "Dancing With The Stars." Five celebrities are left in the competition.

Larry Birkhead returned to his old Kentucky home with his baby Dannielynn on Tuesday. Birkhead said he plans to show off the 7-month-old to his family in Louisville and "relax and horse around."

Kentucky and horses are on the itinerary for Queen Elizabeth II this week as she pays a state visit to the U.S. The Queen and Prince Phillip kicked off their royal tour Thursday in Richmond, Va., and are scheduled to attend at the Kentucky Derby on Saturday and visit President Bush in Washington next week.