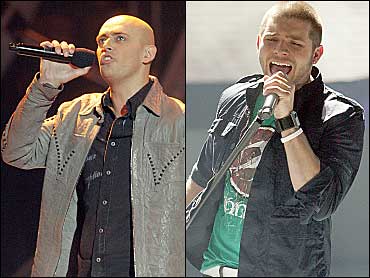 With no one ousted at the end of last week's charity-focused show, "American Idol" gave the heave-ho to two contestants Wednesday night — Phil Stacey and Chris Richardson.

The viewer vote tally from last week was added to this week's, with more than 135 million phone and text-message ballots cast in all. Stacey, 29, of Jacksonville, Fla., and Chris Richardson, 22, of Chesapeake, Va., drew the fewest votes. With their departure, the number of finalists is down to four. The winner will be chosen May 23.

Randy Jackson said on Tuesday's program that Stacey's take on Bon Jovi's "Blaze Of Glory" was his "best performance ever." Stacey — a "good man," said host Ryan Seacrest — performed that song one last time on Wednesday, as LaKisha Jones and other finalists wiped away tears.

"Thank you to everybody for keeping me in this long," said Richardson, before giving a farewell performance of "Wanted Dead Or Alive" — again, by Bon Jovi.

And the final four are Jones, Lewis, Jordin Sparks and Melinda Doolittle.

In its sixth season, "American Idol" continues to rule the ratings. It has attracted 26 million to 37 million viewers per telecast this season.
By Erin Carlson