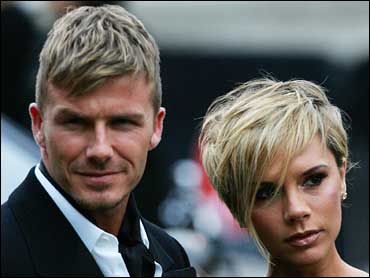 English soccer star David Beckham flew to London by private jet for a birthday bash on Wednesday with family and friends, Hello magazine reported Thursday. The trip was a surprise, according to Beckham's publicist Glenn Lehrman.

British chef-reality star Gordon Ramsay and his wife, Tara, were also in tow.

"There were no speeches, just lots of loud chat and catching up on old times," Lehrman told The ShowBuzz in an email. "David's night was short as he had to fly back that night to Madrid for training the next day."

Beckham turned 32 on Wednesday. His wife, Victoria, aka Posh, showed up for the party in black shift dress and David, who recently bleached his hair blonde, wore a navy suit.

Lehrman said that Victoria made appointments for David at a suit maker in Savile Row, in central London.

"He was also measured up for bespoke shirts, shoes and a specially made watch," Lehrman added. "They then went out for dinner to Cipriani's."

"Extra" reported this week that the Beckhams purchased a $22 million home that is a stone's throw from their pals, Tom Cruise and Katie Holmes.