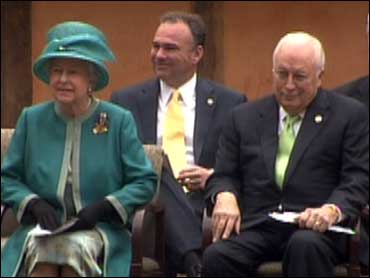 Under gray skies and flanked by Vice President Dick Cheney and Gov. Timothy M. Kaine, the monarch walked along a tourist village of primitive, thatch-roofed buildings.

Cheney noted the queen's last visit to Jamestown, 50 years ago for the 350th anniversary commemoration of its founding.

"Half a century has done nothing to diminish the respect and affection this country holds for you. We receive you again today in that same spirit," Cheney told the queen in a welcoming speech.

The queen did not speak.

She was also greeted by retired Supreme Court Justice Sandra Day O'Connor, who noted the historical ties between the two countries long after America had fought a war to win its independence.

Together, O'Connor said, the two nations had prevailed in two world wars and the Cold War in the 20th century. And the United States had prospered as a free land under laws borrowed from Britain.

Photos: America Welcomes The Queen
Photos: Royal Life, The Queen At 80
Photos: Elizabeth Through The Years

"These settlers used these legal tools in forming their community. The establishment of the rule of law derived from Great Britain is the great and lasting achievement we celebrate today," O'Connor said.

She also noted the stain of slavery got its start in America in Jamestown, where the first Africans arrived in 1619 and that the United States had only begun its long struggle for racial equality when the queen last toured Jamestown.

Since the queen's last visit there 50 years ago, Jamestown has literally been rediscovered, reports CBS News correspondent Mark Phillips.

The queen toured an archaeological dig taking place at a site archeologists thought was lost in the river mud: the actual foundations and thousands of artifacts from the original settlement in 1607, 13 years before the Pilgrims at Plymouth Rock.

"It's the first act, scene one of the American dream," says Bill Kelso, Jamestown's chief archeologist.

Large crowds waited amid tight security to see the queen, lining her path through Jamestown Settlement.

Carol Rideout of Williamsburg woke long before dawn and headed out to Jamestown Settlement, where she and several hundred others waiting to see Queen Elizabeth II were pleasantly surprised.

2Rather than being kept at a distance from the replica of the three-sided original Jamestown fortress, they were allowed inside for a good view of the monarch.

"I got lucky. Everyone in the world knows Queen Elizabeth II. She's come so far and I just wanted to see her," said Rideout, a retired scientist.

The queen toured a facsimile of the armory believed to have been in the original settlement in the 1600s. Fred Scholpp, a costumed interpreter, showed the queen the sort of weapons it might have contained, including a 17th-century breastplate. She touched it with a gloved hand and smiled.

She also walked to docks on the James River nearby, where replicas of the three sailing ships on which the settlers arrived in 1607 and a cannon was fired from one of the ships in tribute to her.

The queen, Cheney and Kaine will attend a lunch in Williamsburg, then visit the College of William and Mary before the royal couple departs for Louisville, Ky., and Saturday's Kentucky Derby. Next week she visits President Bush in Washington.

On Thursday in Richmond, the queen addressed the General Assembly, lauding social changes in Virginia since her 1957 visit when the anniversary was an all-white affair and the state was in open defiance of a 1954 Supreme Court order to desegregate public schools.

She also mentioned the April 16 shootings at Virginia Tech, where a gunman killed 32 people and then himself.

"My heart goes out to the students, friends and families of those killed and to the many others who have been affected," the queen said. "On behalf of the people of the United Kingdom, I extend my deepest sympathies at this time of such grief and sorrow."

Afterward, she met briefly with students and faculty from Virginia Tech, including three who were wounded, and with 100-year-old Oliver W. Hill, a civil rights attorney whose litigation helped bring about that 1954 desegregation decision.

Thursday night, she toured Colonial Williamsburg in a horse-drawn carriage, waving with a gloved hand to thousands who lined Duke of Gloucester Street despite a drizzle.

O'Connor's carriage was the same one the queen and her husband rode in during their 1957 trip. The carriage the queen used Thursday was built in 1960 and is fancier.

The plane carrying the 81-year-old queen landed in mid-afternoon on Thursday, and 20 minutes later she emerged with her husband, Prince Philip.

Hundreds of people stood in lines for hours in a cool drizzle, some since dawn, to enter the grounds of the freshly refurbished 219-year-old Capitol.

"How often do you get to see the reigning monarch, much less in your own town?" said Keith Gary, the first spectator through the gates.

And while the queen represents a monarchy the United States went to some trouble to get rid of, her visit is prompting excitement and anticipation about the special relationship that exists between the Mother Country and her rebellious child.

As has often been the case with the queen's previous trips to the U.S., she will be feted by politicians and the public. America always rolls out its best for the queen, and she seems to enjoy herself when she's here.

Society Editor Victoria Mather says the queen has a deep affection for the United States:

"America has been our ally, and our friend, very particularly during the 20th century, and has fought beside us during two world wars. I don't think the colonial aspect of it is particularly interesting to her, other than in a historical sense."

Part of her appeal is her longevity — Elizabeth has already been through 10 American presidents dating back to Eisenhower. And while, by definition, she stays away from politics, she does have political uses.

On a California trip in 1983, her presence allowed a Republican President Ronald Reagan to draw a crowd of adoring West Coast liberal celebrities.

A current president with flagging popularity might also benefit from her reflected glory.

The venerable Churchill Downs, a colorful playground of the rich and famous, is never more festive than on the first Saturday of May, when high-born and low meet for the annual Run for the Roses. With the queen attending her first Kentucky Derby, Louisville is putting its best foot forward.

And though the queen has never attended the Kentucky Derby, she has visited the Bluegrass State a number of times before, namely to a horse farm in Lexington where she has taken her mares to be mated, according to her former spokesman Dickie Arbiter.

"It's going to be a great day for her. We have to remember, she is 81, so she's allowed a little bit of downtime between this sort of rather hectic state visit and the derby is the downtime," Arbiter said on The Early Show Friday.

She also will visit NASA's Goddard Space Flight Center and the National World War II Memorial in Washington before heading home on Tuesday.