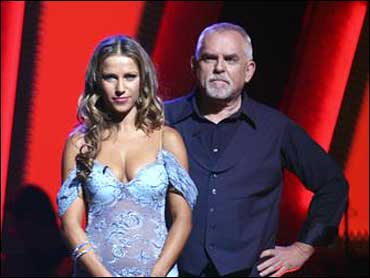 Though judge Bruno Tonioli said the actor's moves made it look as if he had "been to dance rehab," his footwork failed to impress fans.

Viewer votes are combined with judges' scores to determine which couple will be eliminated each week.

Ratzenberger thanked his professional partner, Edyta Sliwinska, saying, "Her kindness and patience and friendship has really been astounding."

Tuesday's results show also included a "Sports Center" spoof with ESPN reporter Kenny Mayne, an early reject of the second season of "Dancing With the Stars." He was joined by fellow Season 2 alum Jerry Rice and show judge Len Goodman.

In their analysis of the 60-year-old Ratzenberger, whom Mayne referred to as "J-Rat," they noted the actor's likeability.

Rock relic Meat Loaf also performed on Tuesday's show, singing his 1970s anthem "Bat Out of Hell" and his new single "Cry Over Me," from his 2006 album, "Bat Out of Hell III: The Monster is Loose."