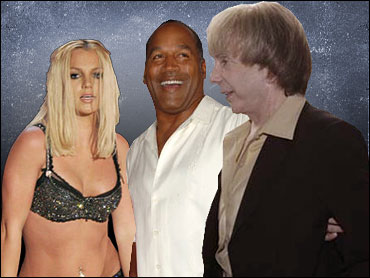 Seems like "call my lawyer" is being heard much more often than "call my agent" in Hollywood these days. This week was no exception, as stars spent more time with their attorneys than they did with their glam squads. What's next, designer legal briefs?

As of Friday morning there still was no verdict in the murder trial of music producer Phil Spector. The jury in appeared to be deadlocked.

Britney Spears won't be free to do as she pleases since a judge has ordered her to undergo random drug and alcohol testing. The pop star is in the middle of a custody battle with ex-hubby Kevin Federline.

A judge let The Game walk free by giving the rapper a conditional discharge on a charge of impersonating a policeman. Meanwhile, fellow rapper Snoop Dogg also struck a plea deal on a felony count of possession of a dangerous weapon. He was given 160 hours of community service and three years possession in exchange for his guilty plea.

Denise Richards asked a court to stop allowing ex-husband Charlie Sheen to have overnight stays with their two young daughters. Sheen, 44, has complained that Richards is interfering with his relationship with their daughters since the couple's bitter divorce last year.

Disney star Vanessa Hudgens discovered that she was sued by her lawyer this week. The lawyer says she owes him $150,000 in unpaid legal fees.

Collin Farrell's personal dresser on the "Miami Vice" movie set has settled a lawsuit against the movie's production company two years after she fractured her jaw during filming.

Even Zsa Zsa Gabor dismissed a lawsuit against her daughter over family money. An attorney representing Gabor and her ninth husband, Frederic Von Anhalt, voluntarily moved to dismiss the case, according to lawyers for both sides.

Of course, there was something going on in Hollywood this week that involved voting -- but not from a jury. The Academy of Television who handed out this year's Emmys Sunday night. No one show or actor swept the awards, as "The Sopranos" won outstanding drama series and "30 Rock" took outstanding comedy series.