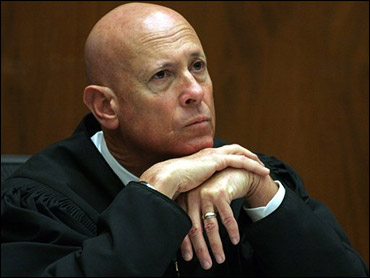 The judge in Phil Spector's murder trial has given the deadlocked jury new instructions with several scenarios as to how the legendary record producer might have killed actress Lana Clarkson, including that Spector forced her to put a gun in her own mouth and it went off.

Spector's attorneys had vehemently objected outside the jury's presence that Superior Court Judge Larry Paul Fidler was turning the defense against itself at the last minute because they had presented scientific evidence that Clarkson had probably pulled the trigger herself, either by accident or in a suicide.

The prosecution supported the judge's move on grounds there was "a plethora of evidence" that would support such a scenario, and the judge commented, "It's a reasonable inference that can be drawn."

The jury, which got the case Sept. 10, was sent back into deliberations after also receiving instructions including suggestions such as having new discussion leaders or reverse role-playing in which jurors argue opposing jurors' views. The panel talked for less than an hour before recessing for the night.

2"It's hard to imagine what new instructions is going to do for these jurors," says CBS News legal analyst Andrew Cohen. "The judge hopes that it makes the jury resolute toward reaching some unanimous decision but it could just as easily backfire and make jurors resentful about being sent back into the room when they have made it clear they can't agree on a verdict."

At minimum, Cohen adds, "if the jury remains hung up, the judge won't ever feel like he didn't go the extra mile to try to get a verdict. Even if Spector is convicted, this whole episode about the start and stop and start again of deliberations surely will come up on appeal."

Spector, 67, is charged with killing Clarkson in the foyer of his Alhambra, Calif., mansion on Feb. 3, 2003, a few hours after she met him at her job as a nightclub hostess and went home with him. During the trial, prosecutors called five women who claimed that Spector threatened them with guns in incidents long ago.

The defense presented expert witnesses who maintained that Clarkson, 40, was depressed and shot herself through the mouth, either on purpose or by accident.

3The new instructions came two days after the panel reported a 7-5 impasse on the implied-malice, second-degree murder charge against Spector and several jurors told the judge they were having trouble with one so-called pinpoint instruction concerning the prosecution's theory of how the shooting occurred.

That instruction said that in order to convict Spector of second-degree murder the jury had to find that "the defendant must have committed an act that caused the death of Lana Clarkson." It went on to specify the act was pointing a gun at her, which resulted in the gun entering her mouth while in Spector's hand.

After the impasse was reported, the judge decided to retract the instruction on grounds that it misstated the law.

When the jury was summoned, the judge told them to no longer use that instruction and he issued a new one.

Fidler told the panel that to prove Spector guilty, "the people must prove that ... the defendant committed an act with a firearm that caused the death of Lana Clarkson, such as placing a gun in her mouth or forcing her to place the gun in her mouth at which time it discharged, pointing the gun at or against her head at which time it entered her mouth and discharged, pointing the gun at her to prevent her from leaving the house, causing a struggle which resulted the gun entering her mouth and discharging."

Fidler then added a caution.

"By using these examples I am not suggesting that any of these acts took place. These are inferences you may draw from the evidences but are not required to do so. You may reject them. These are only possibilities that you may consider," the judge said.

The judge also told jurors that to convict, the act by the defendant must be more than "drawing or exhibiting a firearm in the presence of Lana Clarkson in a rude, angry or threatening manner" and that he had to have had a state of mind called "malice aforethought," which does not require hatred or ill-will toward the victim or deliberation.

Defense attorney Bradley Brunon objected during the legal debate, saying the judge was drafting an instruction that offered the jury numerous hypotheticals on how Spector might have caused Clarkson's death but did not include any of the defense arguments on how Clarkson might have caused her own death.

"Why don't we give them equivalent scenarios" for the defense point of view, Brunon said.

The exasperated judge said that if the defense wanted to reargue the case "that opportunity exists."

"You can't retry the case after a week of deliberations ... there really is no viable alternative other than to mistry it and do it right the next time. There's no way out of it," Brunon said.

The judge refused to declare a mistrial.

"The judge gave the prosecution everything they wanted and some things they didn't even ask for," said Stan Goldman, a Loyola University Law School professor who was observing in the courtroom. "He has in some respect turned the defense team's case potentially against them. All of the defense experts said she fired the gun."