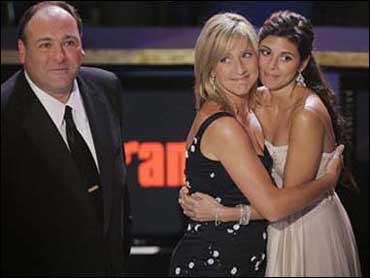 "The Sopranos" didn't sweep at the 59th Annual Emmy Awards as many of the mob series' fans had hoped, but it did pick up the evening's biggest prize: outstanding drama series.

The HBO drama wasn't a sure bet for the trophy, which it claimed in 2004; that prize rarely goes to a drama after the show is off the air.

"This amazing cast is what it came down to," said series creator David Chase, as he picked up the writing award. "It really is all about them."

Although five members of the "amazing cast" were nominated, none of them took home trophies from Sunday night's show on Fox, which was broadcast live from the Shrine Auditorium in Los Angeles.

"I feel like I just stole a pile of money from the mob," said Spader, accepting his award.

"The Sopranos" cast members Michael Imperioli, Aida Turturro and Lorraine Bracco were up for supporting actor awards, but none of them won.

Edie Falco, who played Tony Soprano's long-suffering wife Carmela, was shut out by Sally Field, the matriarch on "Brothers And Sisters," for outstanding lead actress in a drama.

Echoing her over-the-top "you like me, you really like me" speech from the 1985 Oscars, an emotional Field stumbled halfway through Sunday's acceptance, lost her train of thought, screeched at the audience to stop applauding so she could finish talking - and then was bleeped by Fox censors as she stammered through an anti-war rant.

"And, let's face it, if the mothers ruled the war, there would be no (expletive) wars in the first place," Field said, but Fox cut away for much of her comment.

Backstage, Field told reporters that she wanted to recognize mothers who wait for their sons to come home from war. She added, however, that she "didn't have a political agenda."

Told that she had been bleeped, Field responded: "Oh well. I've been there before. Well, good. I don't care. I have no comment other than, oh well. I said what I wanted to say. I wanted to pay homage to the mothers of the world, and let their work be seen and valued."

The usually staid awards needed attention from the censors from the start, with first presenter Ray Romano. He joked about his former "Everybody Loves Raymond" wife, Patricia Heaton, sleeping with her new "Back to You" costar Kelsey Grammer.

But he used a stronger word, which prompted Fox to black out the show for a few seconds. "Grey's Anatomy" star Katherine Heigl mouthed another expletive, and Fox tried to evade that with a different camera shot, but it was seen.

3For the first time, the Emmy audience was seated in the round at the Shrine Auditorium in Los Angeles, with members of each cast seated together.

Newcomer "Ugly Betty," the high camp series adapted from a Colombian telenovela, lost the outstanding comedy series award to another freshman series, "30 Rock." But, America Ferrera, who plays the show's title character, Betty Suarez, took home an Emmy for outstanding lead actress in a comedy series, matching her Golden Globe and SAG awards for the show.

Jeremy Piven was the first award winner of the night, picking up the outstanding supporting actor in a comedy trophy for his role as Ari Gold on HBO's "Entourage."

"What an embarrassment of riches to be able to even play this role," Piven said. "It's incredible. I'm having the time of my life."

This is his third nomination, and his second win for the role.

"Thanks for getting my name right," said Heigl, whose name was mispronounced when she presented an award earlier in the evening. "My own mother told me I didn't have a shot in hell of winning tonight, so I really don't have anything prepared. She's a really big supporter. She does love me."

Christina Aguilera proved herself to be the polar opposite of her former "Mickey Mouse Club" cast mate Britney Spears. The elegantly dressed Aguilera joined Tony Bennett, a multiple winner for his special "Tony Bennett: An American Classic," in a duet of "Stepping Out With My Baby." Spears had been rumored to appear on the show to apologize for last week's disastrous performance on the MTV Video Music Awards.

Jaime Pressly picked up an outstanding supporting actress in a comedy award for "My Name Is Earl."

Terry O'Quinn, who stars as the rugged John Locke on ABC's "Lost," won for outstanding supporting actor in a drama series. "Sometimes when we're rolling around in the jungle in the mud, hitting each other and stabbing each other, I wonder what it would be like to bake up a sheet of cookies on Wisteria Lane and get one of their checks," said O'Quinn, referring to the street where the plot thickens on "Desperate Housewives."

"Then I think about my castmates and crewmates, and I realize why I have the best job in the world."

Ratings expectations were dampened by last year's outcome, when the show drew its fourth-smallest audience ever of about 16 million viewers. There also was formidable competition from Sunday evening's Chargers-Patriots NFL game airing on NBC.

Guest actors in drama and comedy series honored at the creative arts awards were Elaine Stritch for "30 Rock," Leslie Caron for "Law & Order: Special Victims Unit," John Goodman for "Studio 60 on the Sunset Strip" and Stanley Tucci for "Monk."