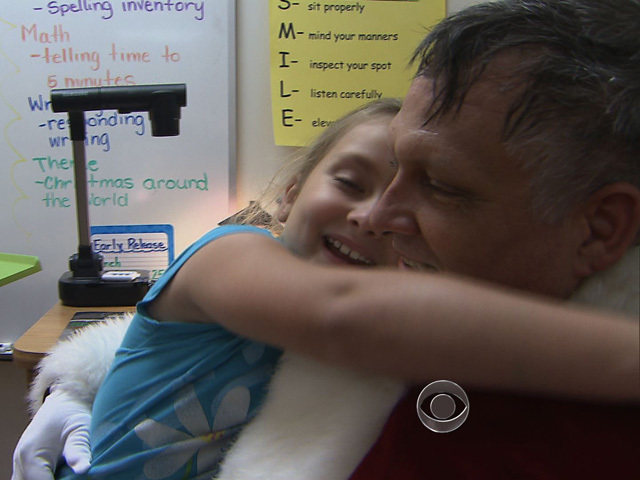 Sometimes the very best presents don't come with price tags and they don't require batteries. CBS News correspondent Steve Hartman has a lesson in the holiday spirit, on the road.

When Santa showed up at Tar River Elementary near Raleigh, N.C., he not only brought gifts -- he brought every second-grader the exact toy they'd asked for in their letters.

"Did everybody get what they wanted?" Santa asked the kids.

Every kid that is - except for Bethany Arnold, who refused to ask him for a single toy.

In the letter, Bethany wrote: "Dear Santa, my daddy is in Iraq. Could you bring him home for Christmas?"

"Did you know you were asking for something that was kind of tough?" Hartman asked Bethany.

"Yes," she said, "but it's tough to go around the world in one night, and I've never wanted anything more than that."

Bethany's dad, Wyndal Arnold, is a contractor in Iraq. He's been working on that country's much-needed electrical infrastructure.

"I understand that he has to stay and help people, but I do miss him a lot," said Bethany.

In the last two years, she's seen him less than two weeks. Last time they saw each other, while he was on leave in Germany, they exchanged heart-shaped key chains. She carries his, while he holds onto hers.

"I told her, 'The next time I see you, I'll give your heart back,'" said Wyndal Arnold.

Unfortunately, bringing two hearts together at Christmas isn't always a government priority. Which is why this year, Bethany decided to appeal to a higher authority: Santa.

She even asked him again at school.

"Santa, for Christmas, I want my dad to come home," she told him.

And that's when her wish began to come true. Santa gave Bethany her heart-shaped keychain back, revealing to us the true meaning of Christmas.

"Daddy!" said Bethany, seeing that it was actually her father, Wyndal Arnold, in the Santa costume, and embracing him. There's not a toy in the workshop that ever got this kind of reaction.

"Are you sure you don't want something else?" Wyndal asked his daughter.

"Just so happy that you're home," she said.

Not a bow big enough to wrap the joy.