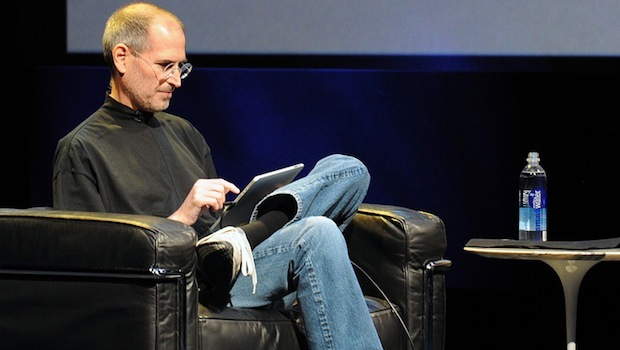 (MoneyWatch) Steve Jobs was an American icon and one of the greatest entrepreneurs in history. His accomplishments as the founder and CEO of Apple (AAPL) and Pixar are unmatched in modern times.

What made Jobs so successful were his unique talents and his powerful self-image. He truly believed he was special. Ironically, that same quality may have been the reason why he refused potentially life-saving surgery for pancreatic cancer, something he later regretted, according to biographer Walter Isaacson.

That's what makes the legacy of Steve Jobs so inspiring, and yet so endearing. In his life we see greatness, but also frailty. In his speeches we find both power and humility. This was a man who did what few have done. He actually did make a dent in the universe. But, after all, he was just a man.

For the record, I'm no Apple fan-boy. I own its products because they make it easier for me to work and enjoy life. So on the first anniversary of his passing, it only seemed fitting to share some inspirational life lessons I've come to learn from Steve Jobs. Not surprisingly, they're as simple, genuine and iconic as the man and the products he created.

One of the most inspirational speeches I've heard in my entire life was the Stanford University commencement address Jobs delivered in 2005, where he encouraged future entrepreneurs and leaders to trust their instincts and find their own true path in life:

"You have to trust that the dots will somehow connect in your future. You have to trust in something -- your gut, destiny, life, karma, whatever. This approach has never let me down, and it has made all the difference in my life. The only way to do great work is to love what you do. If you haven't found it yet, keep looking. Don't settle."

Only a true marketer like Jobs could somehow manage to find two words that described his philosophy on life. Those words -- think different -- became the mantra, as well as the company's advertising slogan, that drove Apple to develop breakthrough products that would dominate their markets. As Jobs said, "Your time is limited, so don't waste it living someone else's life. Don't let the noise of others' opinions drown out your own inner voice."

Inspire others to do great things

By all accounts, Jobs was hands-on to the point of micromanaging. But in the end, he built an extraordinarily talented management team and organization that are fully capable of carrying on without him.

While so much of Apple's success is attributed directly to Jobs, the book "Organizing Genius" by Warren Bennis reveals a relatively unexplored talent of the iconic chief executive -- his ability to inspire others to achieve great things. Jobs told the first Macintosh design team that they were there to "make a dent in the universe." And they did.

You have nothing to lose

Being diagnosed with pancreatic cancer changed Jobs. Facing his own mortality seemed to have made him more fearless, more willing to take risks. It became a powerful driving force behind the development of Apple's most groundbreaking products, the iPhone and iPad.

As Jobs said in 2005, "Being the richest man in the cemetery doesn't matter to me. Going to bed at night saying we've done something wonderful, that's what matters to me. Remembering that you are going to die is the best way I know to avoid the trap of thinking you have something to lose."

Success is built on innovation, not invention

As Malcolm Gladwell correctly points out in "Creation Myth: Xerox PARC, Apple and the Truth About Innovation," innovators may not be the guys who come up with ideas, but rather the guys who turn ideas into products people can use.

Steve Jobs didn't invent the computer mouse or graphical user interface, but when he saw them demonstrated at Xerox PARC in 1979 I'm sure his mind was racing with practical applications. Likewise, MP3 players, smartphones and tablet computers were around long before Apple introduced the iPod, iPhone and iPad.

You see, innovators don't see different things -- they see things differently. Steve Jobs certainly did. He was the ultimate focus group of one, a guy with a unique talent to perceive what people wanted before they even knew it themselves. He made technology fit the application, not the other way around.

Perhaps the most inspiring story from that Stanford University speech was about the devastating loss of being ousted from the company he co-founded in 1985 and his subsequent redemption. "I didn't see it then," Jobs said, "but it turned out that getting fired from Apple was the best thing that could have ever happened to me."

After that, Jobs founded NeXT and Pixar, met the love of his life, and ultimately returned to Apple. "I'm pretty sure none of this would have happened if I hadn't been fired from Apple. It was awful-tasting medicine, but I guess the patient needed it. Sometimes life hits you in the head with a brick. Don't lose faith."

Do what has to be done

When Steve Jobs returned to Apple in 1997, the company was nearly bankrupt. So Jobs made a deal with his archrival, Bill Gates. He stood on stage and announced that Microsoft (MSFT) would invest $150 million in Apple and continue to support its Office suite of products for the Mac.

Aside from getting fired from the company he founded, that had to be about the hardest thing that Jobs had ever done. It had to be a humbling experience. But it had to be done, so he did it. And that day marked the beginning of the greatest turnaround in corporate history.