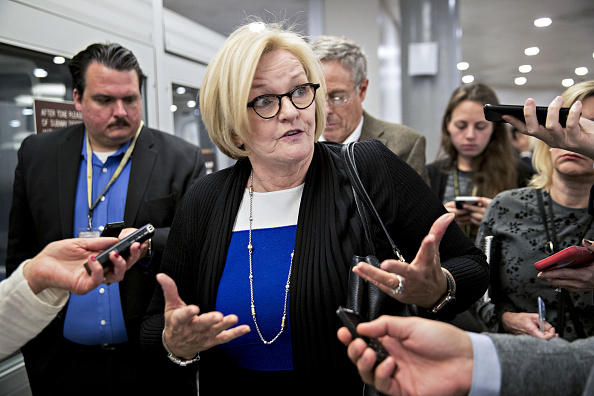 While it's not a sure bet, it's numerically possible that after the 2018 elections, there could be more women senators walking the halls of Congress than ever before.

The victories of Republican Rep. Martha McSally and Democratic Rep. Kyrsten Sinema in Arizona's primaries on Tuesday ensure that a woman will succeed retiring Sen. Jeff Flake. Flake's seat is one of two in the Senate in which a woman is replacing a male senator in a state that has never elected a female senator. The seat formerly held by Democratic Sen. Al Franken in Minnesota is the other. Franken resigned in January 2018, after several women had accused him of inappropriate touching. Democratic incumbent Sen. Tina Smith, who was appointed to fill Franken's vacant seat for one year, is competing against Republican Karin Housley in November's special election to fill his seat.

McSally was the preferred candidate of the Republican establishment in Washington. She was endorsed by President Trump Tuesday night.

When Thad Cochran stepped down in April 2018 because of ill health, Mississippi Republican Gov. Phil Bryant selected Cindy Hyde-Smith to fill Cochran's vacant seat until the special election to replace him in November. She has been endorsed by Mr. Trump, but faces a primary challenge on the right from conservative Chris McDaniel as well as a Democratic challenge from Mike Espy. There are no party primaries in the special election, so all three of them will be on the same ballot. If no candidate receives more than 50 percent of the vote, the top two will proceed to a runoff held on Nov. 27.

Republican incumbent Sen. Dean Heller, of Nevada, is being challenged by a Democratic woman, Jacky Rosen. Democrat Jenny Wilson is running for the open seat in Utah.

Women incumbents will be defending seats, too. Democrat Claire McCaskill of Missouri is defending her seat against Republicag Josh Hawley, and another Democrat, Heidi Heitkamp of North Dakota, is facing a GOP challenge from Kevin Cramer.

In trying to fend off her Republican opponent, Heitkamp has released ads tying herself to Mr. Trump, who is deeply popular in North Dakota. At one point early in his administration, Mr. Trump was considering Heitkamp for a cabinet position. She voted to confirm Supreme Court Justice Neil Gorsuch last year, and Republicans are pressing her to vote to confirm Mr. Trump's second Supreme Court nominee, Brett Kavanaugh. McCaskill is facing Missouri Attorney General Josh Hawley in the general election, but recent scandals in the state's Republican Party could play in her favor.

Heitkamp and McCaskill aren't the only women who are facing challenges by male candidates. Stabenow and Klobuchar also have opponents who are men.

Feinstein, too, is facing a challenge from an insurgent Democrat whom she defeated in the nonpartisan jungle primary, but she may stage a successful comeback in November. Some in the state believe that the 86-year-old senator, who was first elected to the Senate in the 1992 "year of the woman," should step aside in favor of the younger candidate, state Sen. Kevin De Leon.

In Minnesota, Nebraska, New York, Arizona, Wisconsin, and Washington, no matter which candidate wins, a woman will be elected to the Senate.

Should every woman running for the Senate win in November, there would be 26 women in the Senate next year, meaning that women would comprise just over a quarter of the body.

If these five women lose their seats, and each of the women running for an open seat or challenging a male senator failed to win, there would be only 16 women in Congress beginning in 2019.

But whether or not the "pink wave" results in a marked increase in congressional representation by women after the 2018 elections, it seems likely that the wave is still gaining strength.

Caitlin Conant contributed to this article.