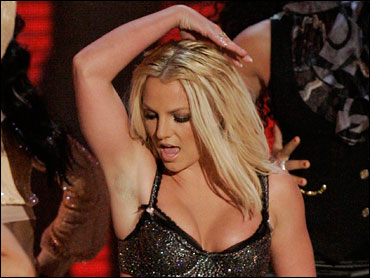 The buzz has it that Spears' dance moves were lackluster and her lip-synching way off, observed E! Entertainment news anchor Giuliana Rancic on The Early Show Tuesday.

Her act was the talk of the after-show party at Tao's, Rancic reported.

"I don't know if she should have started the show off, but I thought it was alright," rapper and record producer Jermaine Dupri told Rancic.

Musician Travis Barker said Spears seemed unprepared, noting, "It looked like she was like rehearsing or something, not to diss her or anything, but that's what I thought."

So, what went wrong?

The pre-show chatter had been all about Spears rehearsing with magician Criss Angel but, commented Rancic, no magic was evident on stage.

"Planet Gossip" co-host Tina Dirmann remarked to Rancic that, "We've all seen her hanging out with Chris Angel lately and, apparently, he was teaching her some illusion-type stuff. She wanted to do some appearing-disappearing stuff during her act. Well, it was just too complicated, they couldn't really pull it off, and so the producers nixed the idea, and she wasn't happy about it. So they had to come up with an alternate performance that night."

There have also been whispers, Rancic said, that Spears might have been on medication.

To that, Dirmann said, "People were not happy with the fact that she was partying late into the night before she would go into the rehearsals and before she had this big performance. She was out on the party scene all night long. Of course you're gonna be tired."

For Rancic's part, she told The Early Show co-anchor Julie Chen, "I do think … it was premature. Britney's just not ready. She's not taking this seriously. She's still out partying way too late. You know, we see her every other day with the lollipop in her hand, the big sunglasses, out till 4 in the morning, doing god knows what. She's just not taking her career seriously. I think this was too soon for her to try to do this.

"But a lot of people are saying, 'You know, maybe MTV is to blame, you know, they shouldn't have put her on, you know, it was too soon.' But if you're MTV and you get a phone call saying, 'Britney's confirmed, she's gonna open,' you're gonna say, 'Yes.' So, of course MTV jumped at this."

Rancic also mentioned the possibility that Spears didn't like the outfit MTV wanted her to wear, so brought her own, including boots that proved inappropriate, because they caused her to be unsteady while trying to dance.