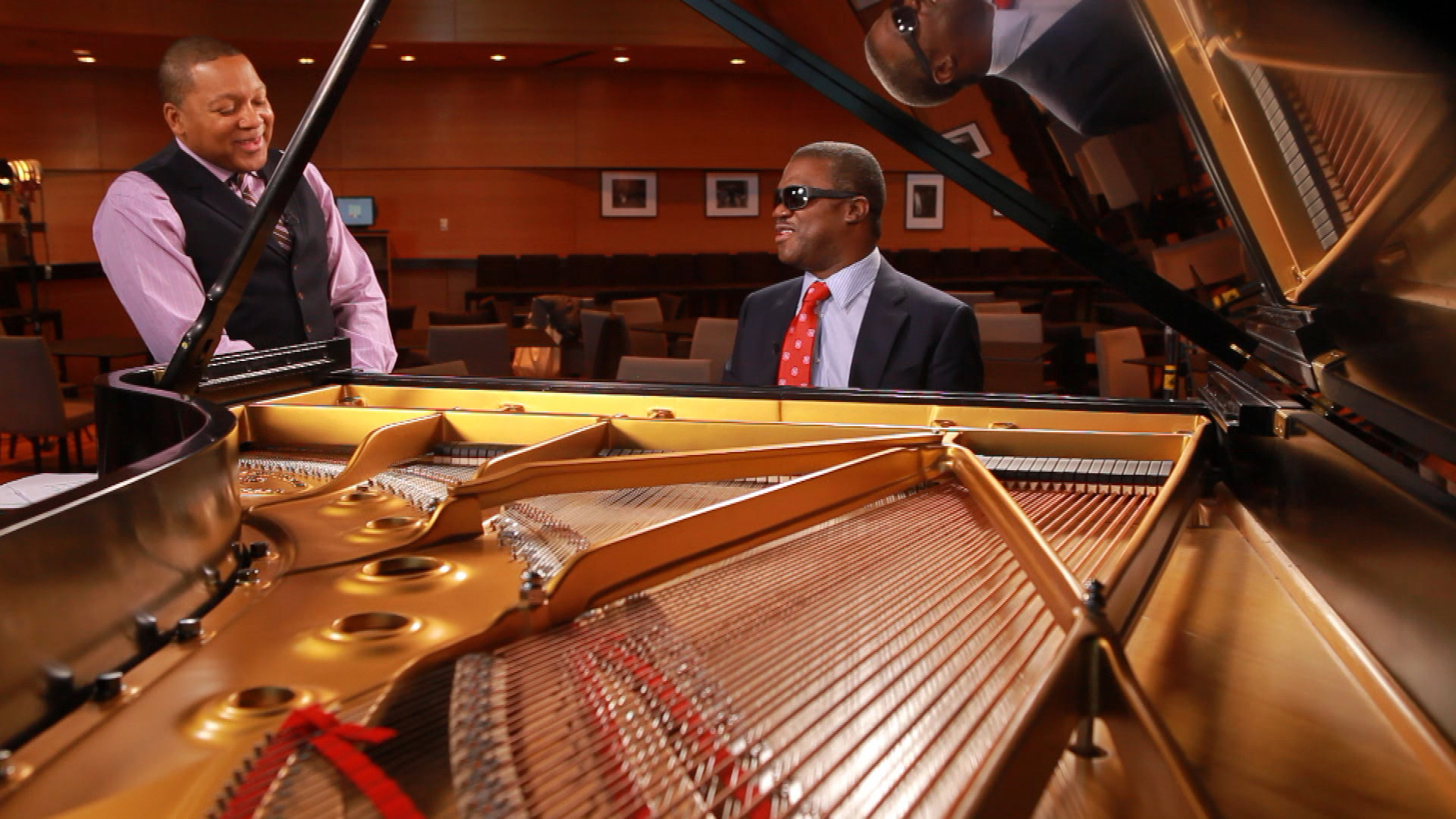 The following script is from "The Virtuoso" which aired on March 30, 2014. Wynton Marsalis is the correspondent. David Browning and Paige Kendig, producers.

Who's the greatest American musician most people have never heard of? To me, it's Marcus Roberts. I'm biased because Marcus worked in my band when he was just starting out. But anybody who's heard him at the piano usually agrees: he's a fearsome and fearless player, and a homegrown example of overcoming adversity with excellence.

Marcus went blind when he was 5 years old. And soon began trying to make sense of life in the darkness. He was unusually curious, and even tore his toys apart just to find out how they worked. Roberts developed a powerful, analytical intelligence, capable of producing music that will move your mind as well as your body. The story of his genius begins with a precious gift from his parents: a piano.

Marcus Roberts: I remember coming home from school one day. I walked in the house, I had no idea they had the piano. And I actually ran into it. I said, "What is this?" And then I figured it was a piano. I swear, that's like one of the most, like, gratifying, exciting days of my life.

[MC: Please help me welcome to the stage, Marcus Roberts!]

The good Lord giveth, he taketh away. Marcus Roberts lost his sight, but gained a rare insight into the soul of American music. He's a virtuoso, a monster musician.

He's an icon to a whole generation of jazz players. Not just a thrilling performer, but a composer, too, of innovative modern music who remembers, as a kid, picking out songs he heard on the radio.

Marcus Roberts: Like, for example, Stevie Wonder's tune "I Wish"?

Wynton Marsalis: So did you ever feel some type of kinship or relationship to Stevie because he also was blind?

Marcus Roberts: I think so.

In childhood, he taught himself the basics, playing with four fingers on each hand because no one told him you could use the thumb. Some dedicated music teachers straightened him out along the way. And after years of practice and sheer determination, Marcus today is a walking encyclopedia of America's jazz heritage, with the DNA of pianists long gone in his fingertips.

We gave him a musical test: play a familiar tune in different styles.

First, as it might have been played by Erroll Garner, a legend from half a century ago.

In the early twentieth century, Johnson took ragtime and made it swing.

Wynton Marsalis: What about Thelonious Monk?

Monk was the modernist, the Picasso of the piano.

Wynton Marsalis: What about Duke?

Marcus Roberts: Duke would be kind of--

He heard Duke Ellington - one of the pillars of American music - on the radio in 1975. And it changed his life.

Marcus Roberts: They were playing - [plays A Train main theme]

Marcus Roberts: Catch the A Train.

Wynton Marsalis: Catch the A Train?

Marcus Roberts: Yeah. I mean, that's what I used to call it.

Wynton Marsalis: Take the A Train, you called it Catch The A Train?

Marcus Roberts: That's what I called it back then, yeah. Take the A Train.

Hearing Ellington's band, Louis Armstrong and other jazz greats, 12-year-old Marcus Roberts was hooked, compelled to figure out the sounds he heard: taking them apart as he'd done with his toys.

Nearly 40 years later, he's at the top of his game. Improvising here on the music of jazz legend Chick Corea. The way Marcus gets around the keyboard even amazes other pianists, including Corea himself.

Chick Corea: Marcus embodies a perfect kind of art in my mind. Marcus absorbed a lot of the history of music. But then comes with a rendition that is completely Marcus Roberts.

For instance: this performance a few years back that Marcus calls one of the greatest experiences of his life. Playing his take on George Gershwin's "Rhapsody In Blue" with the Berlin Philharmonic and conductor Seiji Ozawa before 18,000 people.

A lot of it's improvised. Spur of the moment. Gershwin - not a bad pianist himself - would have been knocked out.

Marcus grew up in Jacksonville, Fla., across the tracks from downtown and deep in the hood, where his mother still lives.

As a little kid, wherever there was a piano, he'd try to unlock the mystery of the keys. So his mother and his father - a longshoreman down on the Jacksonville docks - scrimped and saved for that piano Marcus could call his own.

Coretta Roberts: He went right to it. And went to playing "Mary Had A Little Lamb."

His mother Coretta is sightless too, blinded by glaucoma. She remembers the pain of having to leave school in the seventh grade because she couldn't see the blackboard.

Coretta Roberts: It was just like I had lost a loved one or something.

And by the time he was five, severe cataracts blinded Marcus as well.

Wynton Marsalis: How did your parents explain your blindness to you?

Marcus Roberts: They really didn't explain it. They just taught you how to do stuff for yourself.

Wynton Marsalis: Marcus told me that you were never about self-pity or feeling bad about yourself.

Coretta Roberts: Oh, no, no. I got adjusted to it and accepted it as it was God's will.

Marcus Roberts: She showed you by example. I mean, she could do a lot of stuff that to this day I can't really do. Like she can iron clothes. She can cook. She knows how to like, run a household.

He taught himself enough to get his first gig at the Silas Missionary Baptist Church, on this very piano. It's out of tune but still quite soulful.

Sister Murray: I remember him.

Sister Murray used to lift Marcus up on the piano bench.

Sister Murray: Oooh. He got better. He could really play and he could sing.

Wynton Marsalis: Oh, he could sing at the same time?

Marcus Roberts: And then where you hold chords out is real important in gospel music. So they'll be playin' -

He learned the gospel style. Music for praise, for consolation, for teasing a few more coins into the collection plate.

Wynton Marsalis: When you really wanted the church to get more intensity, give me an example of something you would do to have some intensity to it.

When Marcus was 10, his parents sent him to the Florida School for the Deaf and Blind, down the road in Saint Augustine, where a music teacher - also blind - changed his life.

Hubert Foster introduced Marcus to Bach and Beethoven. That's Marcus on the sax. Foster taught him more about jazz, and how to read musical scores in braille.

Marcus Roberts: He was an amazing man. His biggest point was that, he just said, "You don't want to be ignorant. Because if you add ignorance with not bein' able to see, you're gonna have a rough life. That's not gonna work out for you."

Wynton Marsalis: So you embraced education?

Marcus Roberts: Yeah. Absolutely. I didn't want to be participating in this noble savage notion of being an artist who doesn't really know what he's doing.

We took Marcus back to the school. For a homecoming with some of the people who knew him as a kid, like Vicky Palmer.

Vicky Palmer: He was just a good, genuine young man. And every time I hear his name, I say "Oh, that was one of my students."

For the current crop of blind music students, we put in a good word for jazz. Marcus remembers being inspired here by a visiting musician long ago. We figured we might just do the same.

Student: I was wonderin'...

One young man wanted some pointers. And played us a tune he liked. He soon found himself in a duet with the master.

Marcus Roberts: The same way that this young man came up and had the courage to come down and play, that's the same courage that you all have to have when you go out into the world. You gotta go out with confidence, but you want as much information as you can get your hands on.

Information - learning - is at the heart of Marcus's world. He travels with various devices that let him email, surf the web, even write music in braille. And he has a devoted band of young musicians who record and perform with him. Ricardo Pascal decided to give up computer science and study instead with Marcus.

Ricardo Pascal: He's one of the patriarchs right now of this music.

Back in Jacksonville, we celebrated his 50th birthday, making him an official elder statesman of jazz. The mother who told him to find success in adversity was there. And so was the spirit of the father who did without so Marcus could have that piano. And for the man who can play just about anything, we had one more challenge.

"The same way that this young man came up and had the courage to come down and play, that's the same courage that you all have to have when you go out into the world."

Wynton Marsalis: One final test for you. Art Tatum.

Wynton Marsalis: What you got?

Art Tatum was probably the greatest jazz piano virtuoso ever. In the Tatum style, Marcus plays the Gershwin tune "Someone to Watch Over Me." Remembering the parents, teachers and fellow musicians who watched over him and set him on his way.