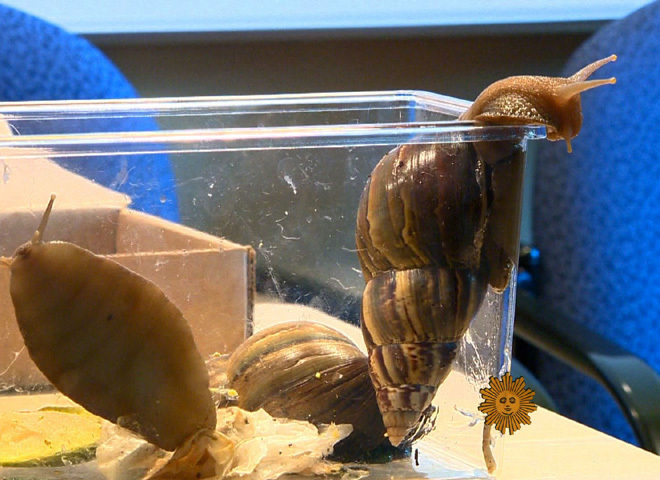 Monsters aren't just figments of our imagination. THEY'RE HERE! Just ask Illinois Governor Pat Quinn who in June called for the total separation of the Mississippi River Basin from the Great Lakes hoping against hope to stop the advance of one very aggressive fish. A fish that's just one part of a far bigger problem. Our Cover Story is reported by Mark Strassmann:

Meet the king of the Illinois River, and a big showoff.

Fast, easy to startle, and voracious eaters, Asian silver carp are a jarring sight here, and a hit on YouTube. but fisheries research scientist Greg Sass...says that in the long history of this waterway, what's also remarkable is when this fish got here...just 20 years ago.

But fisheries research scientist Greg Sass...says that in the long history of this waterway, what's also remarkable is when this fish got here...just 20 years ago.

"By the mid-2000s, it was becoming a crisis," Sass told Strassmann. "Not only with fish jumping everywhere, but just what was showing up in our catches, the amount of Asian carp versus the native fishes."

With no natural predators in this stretch of the river in Central Illinois, up to nine out of ten fish here are now Asian carp.

"We've seen explosive population growth, a population that has almost doubled every year," Sass said. "We're fairly confident we have the highest wild densities of Asian carp anywhere in the world."

Which is quite a feat considering this fish is from China.

The Illinois river has been invaded.

"As a scientist or even a recreational fisherman or a boater, you go, 'Wow, this is a huge, huge problem,'" he said. "These fish are behaving in a way that we're not used to. They're doing things to the ecosystem that we're not completely sure what kind of effect there's going to be yet. And there's just an incredible abundance of them."

It's an invasion from coast to coast, from Africanized killer honey bees in the Southwest to South American nutria in Louisiana, to the spread of the Burmese python in the Florida Everglades ... all part of a scary trend.

"Everywhere we look, we see species that are spreading and damaging our natural ecosystems," said University of Notre Dame biologist David Lodge. "And when scientists look into the future, they see the potential for many more damaging species."

"You make it sound like we're under attack everywhere," said Strassmann.

"We ARE under attack everywhere."

Lodge says our agricultural system depends on plant and animal species imported to America, like wheat and cows and pigs - but that doesn't make them invaders.

"An invasive species is a species that's been transported from one part of the planet to the other by people, and a species that has a harmful impact," Lodge said.

"Typically transported by design, by accident, or little bit of both?" asked Strassmann.

"Both. Lots of invasive species have been transported by accident in the ballast water of ships or as a hidden pest on plants that have been imported. But many have also been imported intentionally."

Like the Shakespeare fan who, back in the 1890s, set out to bring to America every bird mentioned in the Bard's plays ...

"I think we can be grateful that he was unsuccessful for a great many of those birds," said Lodge. "But he was amazingly successful with starlings, which are now one of the most common birds in North America, and a nuisance."

Today they number more than 200 million.

Most species were introduced for practical reasons, like the Asian carp, which was imported to clean catfish ponds in Arkansas.

"But, as is almost always the case, they escaped," said Lodge. "And it wasn't really until perhaps the 1980s that biologists in the Mississippi Basin realized this was a growing problem that was likely to get very severe."

Asian carp migrated up the Mississippi River to its tributaries, the Missouri and Illinois. Today only a series of electric barriers in Chicago's shipping canals separate the fish from the Great Lakes and its $7 billion commercial and recreational fishing industry.

Now consider kudzu, nicknamed the "Vine That Ate the South." Back in the '30s, the U.S. government paid farmers to plant this Japanese vine to control erosion.

John Taylor, who for years was a kudzu expert at the U.S. Forest Service, said the kudzu "began to exemplify the theory of unintended consequences very well. It got everywhere it weren't suppose to get."

Taylor says the vine, which can grow as fast as a foot a day, now covers up to 8 million acres of the south, snapping power lines and blanketing trees and even structures like a barn in rural Georgia.

The kudzu will "eventually cover the whole building and pull it down," said Taylor. "And you're getting kudzu bugs all over everybody."

Itself an invasive species, popularly known in the region as the stink bug, it invades homes in the winter.

"These little fellows like to overwinter in dwellings," Taylor said. "They create quite a furor when people are not used to having hundreds of thousands of these little critters invade their house. And when they're disturbed, their defensive response is a very offensive odor. You might sweep them out, but you'll get a surprise in the process."

As for the vine, Taylor says scientists DO know how to eradicate it ...

The bill would run into the billions, which brings us to the national tab for invasive species.

Lodge says studies suggest the cost to the U.S. economy from invasive species are on the order of at least $120 billion annually ...

... like the $10 billion that cities will spend over the next ten years to treat or replace the millions of ash trees caught in the path of the emerald ash borer, a bug that likely found its way from China on wooden shipping pallets.

... Or the tens of millions of dollars spent clearing pipes and harbors covered in trillions of zebra and quagga mussels, brought to the Great Lakes on ships from Europe.

As the world grows more interconnected, Lodge says the problem will only grow worse. "There's just more opportunity now to move species - intentionally and unintentionally - around the globe," he said.

Few parts of the country have more experience with that than South Florida, through trade, international tourism, and international cargo. "And you have a climate where whatever gets here lives forever," said Adam Putnam, Florida's Agriculture Commissioner.

He said that in recent years, his state has endured infestations as exotic as Burmese pythons and Gambian pouched rats, to vital threats to agriculture like the Mediterranean fruit fly.

On his radar now: The giant African land snail, which can lay 1,200 eggs a year.

Homeowners described them as "slithery and juicy." "They have all kinds of fluids coming out." "For me, it's disgusting."

"With something like the snails we've got the trifecta," Putnam said. "It carries human Meningitis, so people are concerned. It eats 500 different plants, so agriculture's concerned. And it eats houses, so homeowners are very concerned."

This stucco-eating pest that can grow up to 8 inches long has brought together a team of 50 specialists.

Nationally, 30 federal agencies are involved in the fight against invasive species, with about $1.5 billion spent annually.

Federal or state, funding is a struggle.

"It's difficult," replied Putnam. "Screenings at the airport and seaport face other pressures, pressures to look for drugs, to look for bombs, to look for other weapons of mass destruction. So post-9/11 you see less of a focus on snails and citrus canker and laurel wilt disease and things like that."

One solution for Florida: Educating the public.

"Wherever you're coming from, leave all that stuff behind," said Putnam, "because any one of those things can carry the larvae that's going to become the fly that's going to wipe out a $100 billion industry in our state."

So when it comes to invasive species, as we say in the reporting business, this is a story with legs.