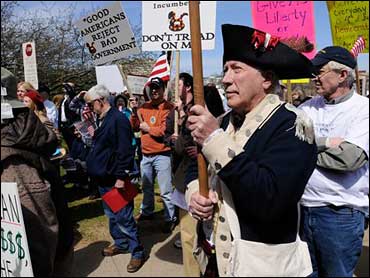 An Orlando lawyer named Frederic O'Neal has registered the Tea Party with the office of the Florida Secretary of State, Politico reports, and intends to run candidates against both Republicans and Democrats in state and national races.

"The current system has become mired in the sludge of special interest money that seeks to control the leadership of both parties. It's time for real change," O'Neal reportedly said in a press release.

One of Florida's most prominent Republicans, Gov. Charlie Crist, already faces a conservative challenger in his bid to become the GOP's 2010 Senate nominee. Conservative Marco Rubio is gaining credibility among the state's conservatives, and has won the endorsement of the anti-tax, pro-limited government Club For Growth.

The split among conservatives and moderates in the Florida GOP is part of a larger debate within the party about the future of its identity.

Even though the conservative lost in that race, "tea partiers" and other conservatives "remain convinced they're on the right side of history," CBSNews.com's Charles Cooper wrote. "And in writing down their morning-after election analyses... they also delivered a hard-edged message to the Republican establishment: Get behind us or get out of the way."

The Tea Party has been registered with the state since August and is one of 32 minor political parties certified in Florida, Politico reported.