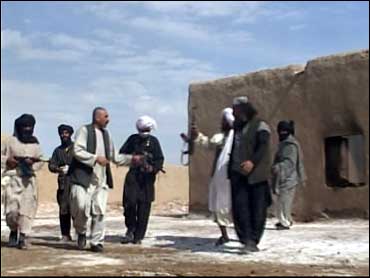 The Taliban Militia (Students of Islamic Knowledge Movement) rules approximately two thirds of Afghanistan. While it seemed as if the Taliban was successfully defeated in the 2001 U.S, invasion, they've been able to regroup and refinance in Pakistan. Now, they want to take their country back and they've adopted the roadside bombings, beheadings and suicide tactics of Al Qaeda - to try drive the U.S away.

How did the Taliban rise to power?

The Taliban rose to power on promises of peace in a country ravaged by a decade-long war with the Soviet Union and subsequent fighting between Islamic factions. Taliban - or "students" - emerged in 1994 with many followers who had attended conservative Muslim schools in Pakistan. In 1996, the Taliban took the capital Kabul, and now controls 95 percent of Afghanistan. A small corner in the northeast is controlled by opposition forces.

Who is the Taliban's leader?

Mullah Mohammed Omar is the reclusive leader, and he is supported by a circle of eight to 10 colleagues. Veterans of the war against the Soviets fill their fighting ranks. Rules are enforced by the Ministry of Virtue and Vice, a religious police force.

What is the Taliban's mission?

The Taliban seeks to establish a radical Sunni Islamic regime throughout Afghanistan. While the Taliban Militia came into existence in 1994, the Taliban are a group of Islamic fundamentalists who live in Afghanistan, Pakistan, India and Central Asia. Their origins have been traced back to the eighth century A.D.

Why is fueling hatred of the U.S.?

The Taliban began to lose power due to the U.S military. On October 7, after the Taliban refused to give up bin Laden, the U.S. began bombing Taliban military sites. By November 21, the Taliban had lost control of Kabul, Afghanistan and by December 9 had been completely routed.

Five years after the Taliban was toppled, Afghans are angry that some $12 billion in foreign aid received by the state since 2001 has not provided jobs, improved security, or raised the standard of living; 53 percent of Afghans still live on less than one dollar per day, according to a Council on Foreign Relations report. A U.S. campaign of air strikes against militants in the south has killed dozens of Afghan civilians, further angering the population.

Why has the Taliban resurfaced?

The Taliban was ousted from power in December 2001 by the U.S. military and Afghani opposition forces in response to the September 11, 2001, terrorist attack on the U.S.

Now, the Taliban has retreated from Kandahar, and regrouped in the border region between Afghanistan and Pakistan. Most post-invasion Taliban fighters are new recruits, drawn again from that region's madrassahs (madrassah means "school" in Arabic). The more traditional Qur'anic schools are claimed by the U.S. to be the primary source of the new fighters.

What are some of the Taliban's rules?

Taliban rules are meticulously enforced by religious police patrols from the Ministry of Virtue and Vice. The "virtue" squads coordinate Islamic education, while "vice" squads stamp out forbidden evils and enforce the movement's conception of "pure" Islam.

(AP)
The Taliban bans music, other than religious song, unaccompanied by instruments. Television, movies and videos are banned. So is kite-flying, seen as a distraction from a life of prayer.

The Taliban espouses a harsh brand of Islam that bars women from working, girls from attending school, forces women to wear the all-encompassing burqa, which covers them from head to toe, and requires them to travel with a male relative. Men are forced to grow beards, pray at mosques and cannot wear short pants.

Under Taliban rule, most young girls were required to cover most of their bodies, but were normally not required to cover their entire body. The clothing they had to wear still allowed for more movement, and was more revealing, than the adult women's clothing. However, they could still be beaten for appearing in public without a male escort. They couldn't go to school. They were, however, able to go out for water alone.

Click here for an interactive guide to the Taliban with maps and photos.

Learn more about the Taliban: