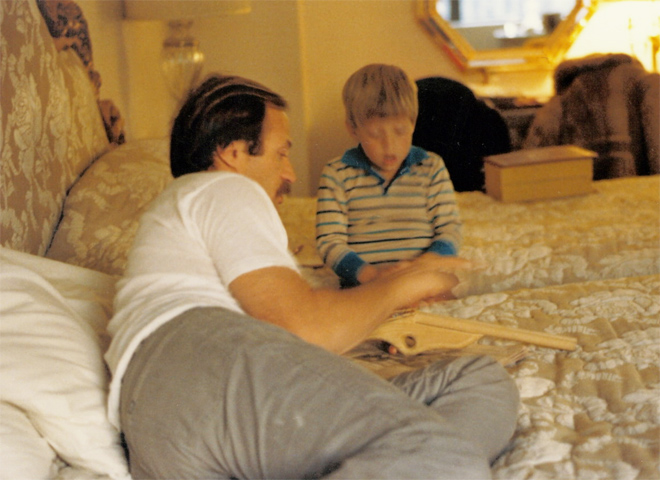 When a boy's bond with his father goes up in smoke, there has to be a reason. And seeking out that reason sometimes leads to unwelcome surprises. That's the story our Tracy Smith has to tell:

"Did you appreciate that as a kid?" asked Smith.

"I don't think I wore a shirt other than at private school until I moved out of Miami," he replied.

Dokoupil still has a soft spot for Miami. It's where he grew up in the 1980s, back when it really was paradise lost.

Those were the days when it seemed Miami was all drug wars and police raids -- an image fortified by a TV show about two cops who sped around town in a black convertible.

"By 1984, when 'Miami Vice' debuted, everything you were seeing on screen was myth and gorgeous, but also reality," Dokoupil said. "And people in Miami were very happy to watch themselves and their lives reflected in an almost documentary way."

But that wasn't his life: Tony Dokoupil's corner of Miami was insulated, and quite comfortable, thanks to his very successful father.

"If you smoked Colombian marijuana in the '70s or '80s, I owe you a thank-you card," said Dokoupil.

Why do you say that? "Because you brought my father's product, and you bought my baseball gloves by extension, and you put me through private school. And you paid for the boat that we crisscrossed the oceans in and the Caribbean vacations. The good life."

Of course as a kid Tony had no clue where it all came from. "When I was old enough to ask questions I was told that he sold real estate in Vermont, and that he developed property."

"Was that true?" Smith asked.

"It was true," Dokoupil replied.

It just wasn't the whole story.

Dad's "real estate" job seemed to allow him a lot of free time, and he doted on his son: made him feel adored.

It was idyllic, until it ended: when Tony Jr. was six, his father abruptly walked away from him and his mother.

"To see him go was a surprise and quite the stab in the heart," Dokoupil said. "And the stab felt like it got deeper as the years went on. And so did the mystery. What happened?"

Dad would reappear sporadically but never for long. Word was that he became a drug addict, and lost everything.

The younger Dokoupil went on to finish college, and get a job as a journalist.

He started looking for his dad, and picked up a paper trail that led to the National Archives in Boston, where he found an indictment charging one Anthony Dokoupil with drug trafficking on a massive scale.

"What did you think when you found that indictment?" asked Smith.

"You've never met someone so happy to discover that their father was a class I felon," he said, "because it showed a degree of high-level accomplishment.

"This was not an easy thing: 17 tons of bulky, smelly plant matter. It's like smuggling 17 elephants in the country. And to pull that off, I thought, 'Huh, maybe he had something going on for himself.'"

Turns out his operation was nearly foolproof: "What my father and his partners did was go to Colombia with a big freighter that you can put tons on, and then have that freighter meet sailboats in the Caribbean."

And those smaller boats would parcel out the load and sail north of the Canadian border, turn around, then head south along the coast to make their deliveries, because southbound boats were seldom suspected of drug smuggling.

They never got caught -- not once.

In fact, the smuggler's life was so appealing, Dokoupil writes in his new memoir, "The Last Pirate," that his dad ultimately chose it over his own family.

Smith asked, "Was your dad a hero?"

"He was a hero to the 40 million Americans who relied on him to bring in product," Tony replied. "Was he a hero to me? We played Wiffle ball and went swimming and had a good time, but in retrospect he could have been a little more heroic as a father."

How so? "Coulda stuck around."

Big Tony's life changed six years after his last job, when a snitch turned him in. In the years before he went to prison, he'd set up the pot dealer's version of a trust fund: burying huge amounts of cash in styrofoam coolers.

The family found some, but most of Big Tony's money just seemed to disappear.

"From the man who made how much, over a life? You must have done the numbers, Tony," said Smith.

Most of it, he says, went to feed his addictions to drugs and women.

"It was just fun," Tony Sr. said. "I mean, I love women. I love to be around them. But I never get a chance to do that, so I'm estranged from them."

His only regret, it seems, is walking away from his little boy.

"But if you could do it all again, would you?" asked Smith.

Father and son came together for our interview. But for Tony Jr. -- himself the father of two -- there is still a lot of hurt to work through.


What's the relationship like now? "I want it to be good, but it's not," Tony Jr. said. "It's not good because I can't look at him without scratching my head. It still is hard for me to understand how I could be confident going forward in the world having come from him. You know, race car drivers don't watch crashes, and my father's a crash. And I don't want to be confronted with it."

"Yet at the same time you're the one who took this full-on, wrote a book," said Smith.

"I took it full-on, and I looked for the answer that I could live with, and I think I found it," he said, "which is he chose his life and I can choose mine. He had the talents that he was born with and he used them for the ends that he saw fit. And he loved it. And I can do the same."

Maybe genes aren't destiny, and you need not accept a future that seems written in the family name. Dokoupil, in Czech, means: ""I bought it all."