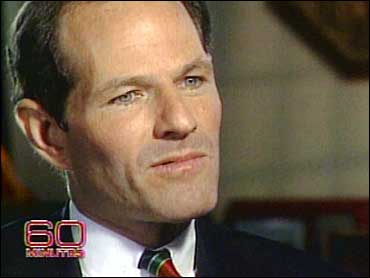 After years of corporate greed and questionable practices that duped small investors, 10 of the largest investment firms on Wall Street have agreed to pay the piper: $1.4 billion dollars in fines, plus some tough new rules that are supposed to keep it from happening again.

Much of the credit has to go to Eliot Spitzer, the aggressive, ambitious attorney general of New York state.

After 90 million Americans lost $7 trillion in the stock market collapse, Spitzer deputized himself the Sheriff of Wall Street and began a crusade for retribution, restitution and reform. Correspondent Steve Kroft reports.


As the attorney general of New York, he is supposed to go after auto repair shops, nursing homes and crooked landlords. His mandate is consumer fraud.

No one thought that Eliot Spitzer had the audacity to look for it in the towers of Wall Street's most respectable firms.

"This is the largest consumer scam ever, perhaps. This is the money of consumers that's been invested," says Spitzer.

"If you think about it, investors put trillions of dollars into the marketplace. Some percentage of it was lost because of the bad advice that was given. Investors are consumers. You can think of this as a consumer case."

Using a small team of 10 lawyers and an obscure 70-year-old state law giving him jurisdiction, Spitzer has managed to do something the Securities and Exchange Commission and Congress have not. He's changed the way business is being done on Wall Street.

"Today, I am announcing the preliminary results of a 10-month investigation of one of the nation's most prominent Wall Street firms, Merrill Lynch," said Spitzer at a news conference.

He alleged that Merrill Lynch had intentionally misled investors in order to line its own pockets, urging customers to buy stocks that the company's analysts knew were bad investments.

"What startled me was the clarity of the evidence," says Spitzer. "That the investment banks and Merrill Lynch, in particular, knew that it was giving a 'strong buy' to stocks when its own analysts said, 'This stock is a dog. It's not worth it. It's going south.' But they continued to push the stock."

No one would have taken Spitzer seriously if it weren't for the proof. Before most Americans learned about the fraud at Enron or Arthur Andersen's creative accounting, Spitzer had already plastered Wall Street firms with subpoenas, prying emails from the computers of top analysts and nailing them with their own words.

For instance, while Merrill Lynch analyst Henry Blodget was publicly touting an Internet company called Lifeminders, privately, at his own in-house computer, Blodget rated the stock a "P-O-S". And that doesn't stand for positive.

"It's a word, I don't know if you allow it on TV. Piece of something. Piece of …; it's the sort of stuff that you clean up after your dog, I think. That's what he said internally," says Spitzer. "But not externally. Externally, they were still pushing the stock."

Why was Merrill Lynch telling people to buy this P-O-S? Spitzer says the answer was obvious to every insider on Wall Street. Analysts were pressured to recommend the stock, so Merrill Lynch could get the company's investment banking business.

In fact, recommending and selling stocks to small investors happens to be one of the least profitable parts of their business. The big bucks are in investment banking: helping clients make deals, merge with or acquire other companies and raising huge amounts of capital for them by issuing their stocks and bonds and then marketing them on Wall Street.

Much bigger than they would have made selling stock to Mr. and Mrs. John Doe?

"Absolutely. The volume and the revenue stream they got from doing the investment banking work was bigger than what they'd got from building up the trust of their retail customers," says Spitzer.

That was obvious from the e-mails.

A colleague wrote Blodget that she didn't "want to be a whore for f--ing management" by recommending a stock she didn't like. "We are losing people money and I don't like it. John and Mary Smith are losing their retirement because we don't want [an investment banking client] to be mad at us."

Spitzer says, "Millions of Americans lost a lot of money because they relied on these analysts. And the analysts knew that they were putting out information and advice that was wrong."

There were some analysts who refused to put out bad advice. One of the most famous is John Olson, an energy analyst at Merrill Lynch who followed Enron when it was one of the hottest stocks on Wall Street.

Olson, who has been an energy analyst for 35 years, knew he was in trouble. But he couldn't quite bring himself to recommend Enron to investors.

"Why should I try and screw these people with inflated recommendations solely to get an investment banking fee," asks Olson. "In 1998, I went out of Merrill Lynch the hard way. I was told in no uncertain terms that my services were no longer needed."

Both Olson and Spitzer believe the pressures of competition, the incentives built into the system and a steady erosion of standards in the Wall Street culture made it inevitable that brokerage customers would end up the losers.

"The money was so vast. There was a structure there that almost compelled them to go forward," says Spitzer. "The pressure that was brought to bear on them to keep their clients happy, the investment banking clients, was so enormous. Because the money involved was so enormous, they just kept doing it."

Merrill Lynch employed nearly 1,000 people in its internal compliance department to make sure things like this didn't happen. They're supposed to report ethical lapses, conflicts of interest and violations of securities law to management.

"Nobody sent up a flare. Nobody said, 'Wait a minute, stop,'" says Spitzer. "I don't think they wanted to find out. I think that there was a culture of if we can do it, and nobody is raising a fuss or a protest, let's just keep doing it."

"This was so pervasive on the Street, I believe, that nobody believed anybody was going to put a stop to it. And when we finally caught them up and said, 'Hey, wait a minute, guys, you can't be doing this,' the first response was, 'But everybody's doing it,'" adds Spitzer. "To which our response was 'Who cares?' The fact that somebody else is doing it is irrelevant. It's wrong, it's got to stop.'"

So why did Spitzer file a civil complaint against Merrill Lynch instead of bringing criminal charges against the firm?

"What we are seeking here is to reform the system and restore integrity and driving Merrill Lynch out of business wouldn't have made sense," says Spitzer.

But would it have put Merrill Lynch out of business?

"If we had made a criminal case against them? Yes," says Spitzer. "They would have a brokerage house that is under indictment, that is convicted criminally of the sort of behavior that I think we probably could have convicted them of, would go out of business."

The lawyers at Merrill Lynch didn't want to take that chance. The firm agreed to an initial settlement pledging to separate the functions of research and investment banking and to pay a fine of $100 million.

Spitzer went after another Wall Street giant, Salomon Smith Barney, and its star telecom analyst Jack Grubman, who earned $20 million a year. His compensation was based on the amount of investment banking he brought in – not on the quality of his stock picks.

As it turns out, some of the CEOs of those failed companies got a lot more than inflated stock ratings from Grubman.

Salomon Smith Barney was so grateful to get the investment banking business of Worldcom, Qwest, McLeod USA, and Metromedia Fiber Network that it gave their CEOs precious allocations of hot stock issues in other companies, worth millions of dollars.

They were IPOs, initial public offerings, and they entitled lucky investors who managed to get them to buy the stock at an insider's price on the very first day of trading. On average, those stocks went up 60 percent that first day. The executives sold the stock at huge profits, with virtually no risk.

"In another context, we'd call that commercial bribery. And that's what it would be," says Spitzer. "Here's $10 million bucks. That's like paying off the store manager to put your product on the shelf. The store manager can't take that bribe."

And nobody saw anything wrong with it? "It's what everybody was doing," says Spitzer.

The person who benefited the most was former WorldCom CEO Bernard Ebbers, who walked away with $11 million in profits from 21 different IPOs given to him by Salomon Smith Barney. Spitzer is suing Ebbers and the other executives to recover $1.5 billion he says belongs to stockholders.

"These are ill gotten gains that they never should have gotten," says Spitzer. "We have evidence far beyond what is in the complaint that proves that the analysts generated false reports, the investment bankers brought in the business, the CEOs got the IPO allocations. Everybody won except the small investor."

Perhaps the most obvious and embarrassing question to be asked is where has the Securities and Exchange Commission been while all of this was going on? In the past 10 years, the SEC failed to bring a single case involving stock analysts or IPO allocations.

"When we first got into this, everybody said, 'Well, what's the state attorney general's office in New York doing, going after this problem. Shouldn't this be the SEC?' And my response was, 'Yes, but they haven't. And if they haven't, and there are investors being ripped off, we will do it.'"

It should come as no surprise that Spitzer has made some enemies. On Wall Street, he is seen as an opportunist, grandstanding to the masses to advance his own political career.

He won re-election as New York attorney general, and many think he has his eye on the governor's mansion. In Washington, some see him as a meddler, poking around in things that are none of his business.

But John Coffee, a law professor at Columbia University, thinks those criticisms are too harsh.

"But for him, these issues never would have gotten on to the political agenda. He found the smoking gun. We can talk about this as a cerebral issue, as economists and law professors long did. But it's not vivid, it's not dramatic, the public doesn't feel it like a kick in the stomach. They were being treated as suckers. And that produces reform."