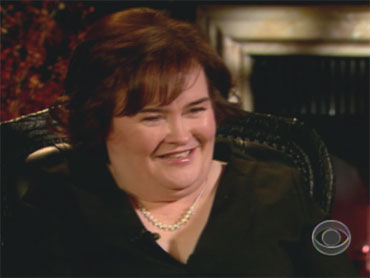 The whole world seemed to fall in love with Susan Boyle last year when she first sang on British TV. She appeared at first to be a living her dream . . . but that's not at how it seemed to her. Mark Phillips has her story:


Susan Boyle wasn't just an unknown wannabe when she walked onto that stage ten months ago.

She was an innocent, placing herself in the jaws of fame. And they almost chewed her up.

It was the beginning of what she now calls her roller coaster ride.

"Minding my own business, getting into a talent show, I didn't even know how I was going to do in the talent show, and suddenly poof!

All Susan had come to do, appearing on the ITV series "Britain's Got Talent," was sing - a promise she had made to a dying mother. And when she did, the world couldn't help but stop to listen . . .

Her performance became a "Where were you when you heard?" event.

In a day, she had gone from being a nobody from a place you never heard of, to being one of the most famous people in the world. It was YouTube's most-played clip of the year - 300,000,000 hits.

Then, she said, "a bit like a demolition ball hit me!"

"It seems like you'd been hit by a 2x4 or something," said Phillips.

But if Susan Boyle stunned the world, it was nothing compared to way the world would stun her.

"Well, I knew I was well enough to sing, but I was just coping with the press and added distractions and the stress that brings... Has been, it's been making the stress out of control at that time. There were about 50 television stations outside my door and stuff like that."

"I'm not saying you! No, no, not at all," she laughed. "And it's difficult for someone who was really quiet to come to terms with that."

She was then a 47-year-old woman who had never left the home in which she had cared for her aging mother in the down-at-the-heels Scottish town of Blackburn. By her own admission she had never been kissed, had "learning difficulties," was bullied at school. 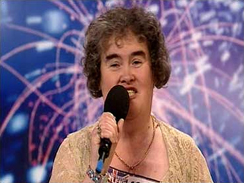 (Britain's Got Talent/ITV)
And now the world was beating a path to her door.

"You've lived a quiet life, looking after your mother in this house," Phillips asked her last spring. "You were known locally, but why did you [go on TV] now?"

"I did, yeah, because I felt I owed something back from my mother, so I thought I'd do this as some kind of tribute to her."

"What do you think she'd think?"

"She's probably be very proud of me!"

"Do you have any sense or idea how your life is going to change?

And boy, did it come. She couldn't get a haircut without the newspapers weighing in.

She couldn't have an argument with a pestering fan without being labeled a thug.

Susan broke under the pressure, and had to retire to a clinic. Her new life wasn't just chewing her up - it seemed about to spit her out.

"Well, I was like a scared child before, but I'm not the scared person I used to be," she says now.

"What ways were you unprepared?"

"Well, I had to learn how to deal with a lot of publicity, and the glare of attention. And that takes a bit to get used to but, um, I got there in the end!" she laughed.

Where she's gotten to is the next chapter in the remarkable rise and rise of Susan Boyle. 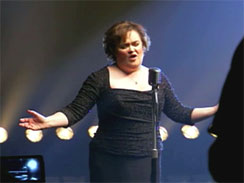 (CBS)
Her new CD, "I Dreamed a Dream," released late last year, has done what everything associated with Susan Boyle has done: set records. It shot to number one with a bullet, and was the fastest-selling female debut album ever. It's sold 3.5 million copies so far.

And it wasn't just a medley of her hits. It showed she is an artist with range, with performances ranging from the torch song "Cry Me a River" and the inspirational "Amazing Grace," to the Rolling Stones' "Wild Horses," and Madonna's "You'll See."

"I like to be challenged, and saw them as a challenge. So if you sing things that are away from what people expect, it shows them what you can do. You see whether or not you are versatile."

"Have you surprised yourself with your versatility?" Phillips asked.

"I have actually. Absolutely honest, I have."

"You didn't know that you can do that kind of thing?"

"I didn't know. It was actually an experimentation. But it's good to experiment. It's a bit like having a wee flower. If you put wee bit of water it gradually blossoms. So we see what happens from there."

"You're that blossoming flower!"

Susan often talks about taking baby steps. She's had brief forays of travel . . . New York, L.A., Japan . . . has done the morning show circuit in the U.S. . . . and she's even hoping she gets to the point where she can go on tour and keep surprising her audience, and herself.

"I think I'm entertaining people," she said. "I'm inspiring a lot of people. What people have written to me about how much I have inspired [them], and I like to keep on doing that for as long as it lasts."

"Do you still have to pinch yourself?"