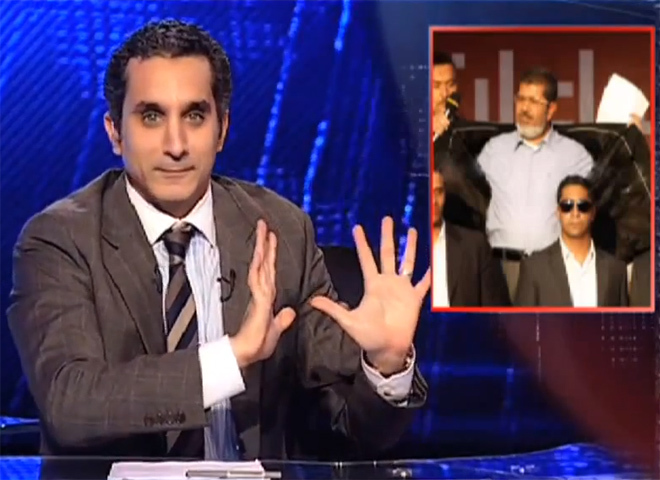 (CBS News) On "The Daily Show" politicians are often the butt of jokes. But in some countries that kind of "seriously funny" can get you into real trouble, as our Mo Rocca has discovered:

When Bassem Youssef was hauled into an Egyptian court last week, charged with insulting President Mohammed Morsi and Islam, it made big news. That's because of the way these alleged insults were delivered.

In a country convulsed with uncertainty two years after a revolution, Youssef himself is a revolutionary -- a TV comic who dares to mock those in power.

"This is a new era, and this is a new Egypt," Youssef told Rocca. "And I'm actually happy and am quite proud to be part of this. So yes, it is changing and we're actually more empowered as people. The [powerful] people and authority are not as scary as they used to be. No matter how scary they want themselves to look like, the people are not scared anymore."

But the government may be scared of Bassem Youssef. His show, entitled "El Bernameg" -- in English simply "The Program" -- is wildly-popular, Friday night must-see TV in Cairo. Each week 30 million people throughout the Arab world watch him make fun of political and religious leaders not used to being made fun of.

"Some of the adventures of actually having a very new emerging political life is that all the people don't have any idea what they're doing," Youssef said. "And we're there actually to make fun of it."

Egyptians have never seen anything like it. If it looks familiar to American audiences, that's because it is unabashedly modeled on Comedy Central's "Daily Show With Jon Stewart."

"In America we have carved out a public space for mockery, satire, conversation that is secure and stable," Stewart said. "He is part of that process that is carving out that space, and that's a very different position to be in. He's creating the space to allow not just himself but other people to express themselves.

"What Bassem's doing is remarkable. He is expressing the courage and the tenacity and the ability that we would all, in our best versions of ourselves, do. But in reality? Not sure. So, he is truly an example."

To watch Bassem perform -- telling jokes, doing impressions, singing and dancing -- you wouldn't guess that before 2011 he hadn't performed at all.

In fact, get this, he was a heart surgeon!

"I think the most upsetting thing about Bassem is the idea that he does this like it's nothing," laughed Stewart, "but could also just kind of walk next door and go, 'Oh, yeah, let me just open up your chest for a real second, just start that for ya'. Dun dun. Okay, there you go.' I mean, that's incredible."

During the uprising that brought down the Mubarak government, Youssef started doing commentaries from home, taking on the various demagogues who were filling the airwaves.

"People who actually misled the public through media," Youssef said. "We got their videos, their names, their pictures. And we were just, like, talking about them freely. And people [were] saying, 'What? You're doing that?'"

Soon he had his own TV show.

Rocca asked, "What have you brought from your years as a surgeon to this role?"

"Working like a dog!" he laughed. "What I got from the surgeon is the kind of dedication and the perfection, being a perfectionist."

And sleep deprivation! "Haven't slept in two days," he said.

Most of his writers are new to television. Shadi Alfons was in advertising. "Post-revolution, people are a little bit more free to say things that they couldn't say in the past. And you know, therefore, comedy does play a bigger role today than it ever did before in Egypt."

The show takes gleeful aim at religious fundamentalists, many of whom were jailed under Mubarak. But Youssef vehemently denies insulting Islam: "I'm a devout Islamist. I don't eat pork or drink wine. I pray. I pray the five prayers and everything. Suddenly me and many like me are being found in a position that we are not Muslim enough."

In fact, he says, he's defending Islam against those exploiting it for political gain.

"Religion should be actually put in its own sacred place," he said. "It should be a spiritual leading, not a tool in politics. If you are going to corner people using sacredness, using religion, and to corner them with your political views so like 'It's either this or Hell,' people are going to discredit you politically and, God forbid, religiously."

Stewart said Youssef has found a way to connect to an audience on a level different than "restarting people's hearts."

"You've got to give credit to a guy who is actually, through his comedy, I think doing more important work than what he was doing as a heart surgeon. I mean, that's an incredible thing to say about somebody!"

Now the government is threatening to pull the license of the network that airs his show.

Bassem Youssef is now out on bail. After his arrest, he was undaunted; on the latest episode of "El Bernameg" it was funny business as usual.

Speaking to Rocca via phone on Thursday, Youssef was asked, "What are they so afraid of?"

"I think when you reach a certain point, the only thing left for you is to just like take out any kind of opposition, and especially those people making fun of you," he said.

For Bassem Youssef, it's the age-old struggle of the court jester speaking truth to the king.