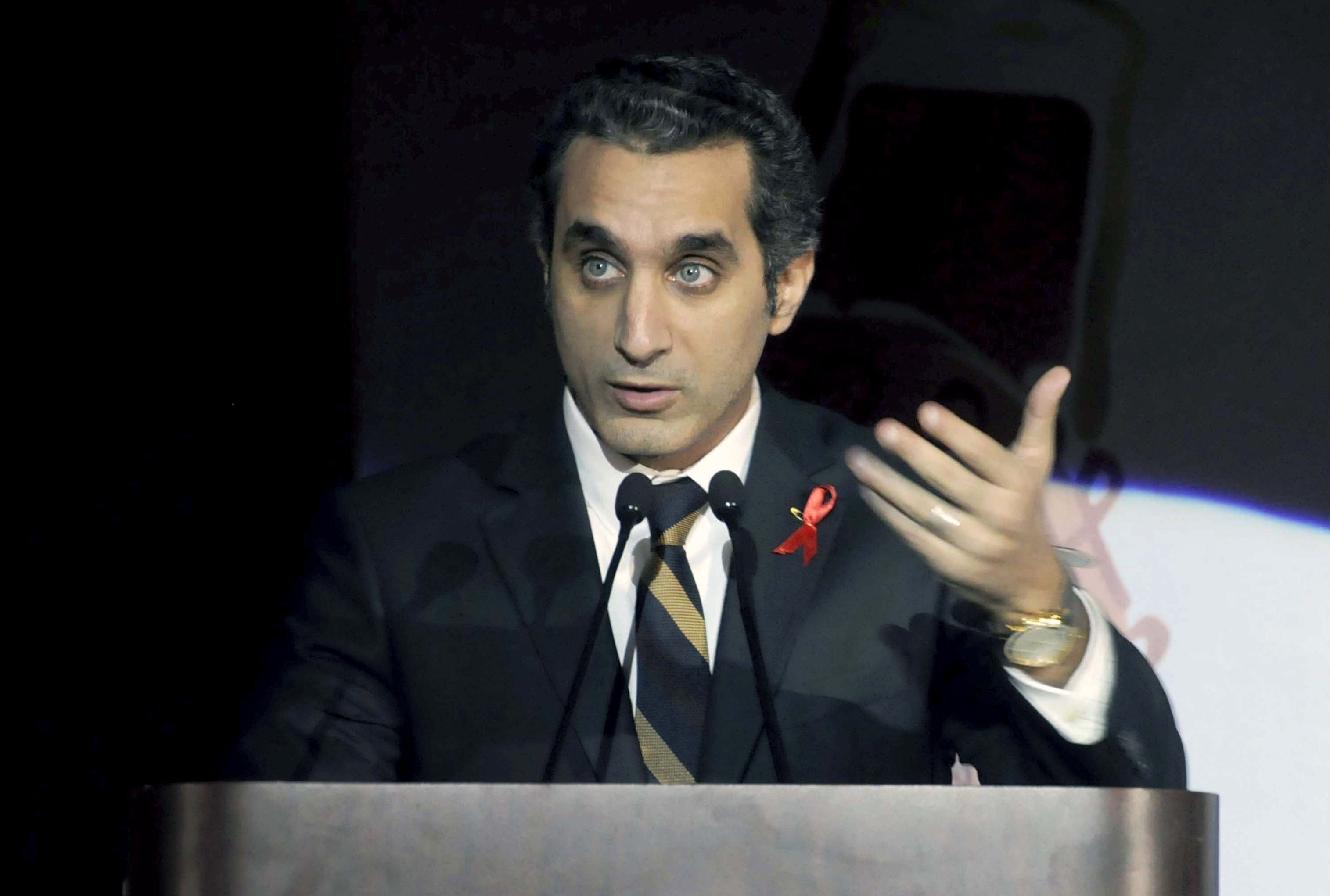 CAIRO A popular television satirist known as Egypt's Jon Stewart was released on bail Sunday after nearly five hours of interrogation over allegations that he broke the law by insulting Islam and the president.

Bassem Youssef is the most prominent critic of Islamist President Mohammed Morsi to be called in for questioning in recent weeks in what the opposition says is a campaign to intimidate critics amid wave after wave of political unrest in deeply polarized Egypt.

Deputy chief prosecutor denied the interrogation was part of an intimidation campaign and said his department was enforcing the law and seeking to establish some guidelines on freedom of expression.

"The prosecution is the protector of social rights and we work on implementing the law. ... There must be guidelines for those working in the media to observe so as not violate the law," Hassan Yassin told The Associated Press.

Morsi last week accused private media of fanning violence and argued that it was being used for political aims.

But Yassin denied that the prosecutor's office was operating at the behest of the presidency to go after Morsi critics, saying it has also interrogated and sentenced Islamists.

Youssef is the host of the weekly political satire show known for his skits lampooning Morsi and Egypt's newly empowered Islamist political class. But he also mocks the opposition and the media.

The fast-paced show has attracted a wide viewership, while at the same time earning its fair share of detractors. Youssef has been a frequent target of lawsuits, most of them brought by Islamist lawyers who accused him of "corrupting morals" or violating "religious principles."

Youssef frequently imitates Morsi's speeches and gestures. He has fact-checked the president, and in one particularly popular episode earlier this year, he played video clips showing remarks by Morsi, made in 2010 before he became president, calling Zionists "pigs."

The remarks caused a brief diplomatic tiff with the U.S. administration, and Morsi had to issue a statement to defuse the flap.

In his last episode this week, Youssef thanked Morsi for providing him with so much material.

Youssef has also made regular jokes about comments by Islamic clerics and Islamic stations TV presenters, exposing contradictions between their comments and public speeches and what he considers the spirit of Islam.

Prosecutor Mohammed el-Sayed Khalifa was quoted on the website of the state-owned Al-Ahram daily that he has 28 plaintiffs in the case against Youssef accusing him of insulting Islam, mocking prayers, and "belittling" Morsi in the eyes of the world and his own people.

The plaintiffs are mostly regular citizens, according to Shaimaa Abul-Kheir, a representative of the New-York based Committee to Protect Journalists who was allowed to attend the interrogation.

In remarks to a TV presenter on CBC, the private station that airs his program, Youssef said on Saturday that his program does not insult Islam but aims to expose those who "distort" it.

"We don't insult religion. What we do is expose those so-called religious and Islamic stations which have offended Islam more than anyone else," he said. "If anyone is to be investigated for insulting religions, it should be all those who use Islam as a weapon and a political tool to swallow the others using religion."

When asked if programs in Egypt should be less scathing than those of the West, Youssef said: "We will give (the West) an example of how freedoms are respected after the revolution," he said of the 2011 uprising that ousted longtime authoritarian leader Hosni Mubarak.

After turning himself in for questioning, Youssef first tweeted a series of quips from the prosecutor's office.

"They asked me the color of my eyes. Really," one said.

A news broadcaster at a TV station affiliated with the Muslim Brotherhood, Misr 25, accused Youssef of "mocking" the investigation. His tweets later were erased and he wrote that some reports from inside the interrogation room were "incorrect."

Amr Moussa, a former presidential candidate, called the warrant for Youssef's arrest a "provocation to Egyptians who are known for their love of what is funny."

"There is nothing odious about criticizing the president," he said in an emailed statement. "This humanizes the president."

Gamal Eid, a rights lawyer, said accusing Youssef of insulting religion — as opposed to just the president — is a tactic aimed at increasing public sympathy for the investigation.

"The accusation of insulting religion would mobilize more people against him," Eid said.

A prosecution official said Youssef was to pay a bail of 15,000 LE ($2,200), pending the completion of an investigation. Youssef tweeted that the bail is for three separate cases.

Eid, the rights lawyer, said the release on bail means all options are open.

"The prosecution could continue investigation, put the case aside or send it to trial."