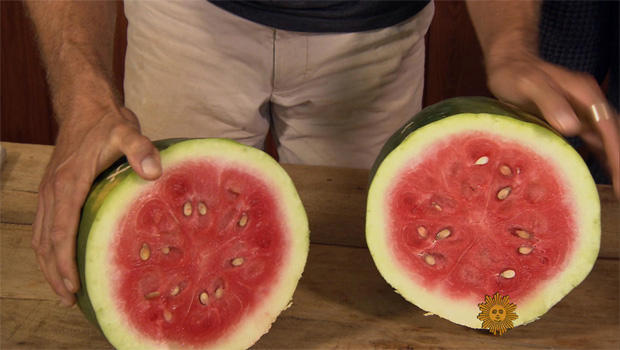 Watermelons are a pretty juicy Fourth of July treat -- but if you thought all of them were the same, you'd be wrong. Few, if any, can beat the variety our Martha Teichner has been sampling:

Not only is the Bradford Watermelon about the sweetest, juiciest watermelon you've probably never heard of, let alone eaten … its backstory is pretty juicy, too.

In the sandy soil of Sumter County, S.C., generations of Bradfords have been harvesting these 30-to-40 pound babies for something like 170 years.

"I came across this book from 1865 by Fearing Burr," said Bradford. "And I'm reading that there's these ancestral melons that are the most sought-after melons. And I go down this list, and Bradford's one of them."

Until then, Nat had no idea that the Bradford Watermelon was so sought-after that it was famous once, its seeds in high demand, and that organized gangs set out to steal them.

As the television series, "The Mind of a Chef," noted, those who grew Bradford Watermelons took measures to defend them -- armed guards in watermelon patches, for example.

The defenders also poisoned unmarked melons in their fields, posting notices, "Pick At Your Own Risk." Unfortunately, sometimes the poisoners forgot which melons were marked, and it was not at all unusual to read newspaper stories of entire families being poisoned by watermelons that they had poisoned themselves.

And there's another hazard: black widow spiders love hiding under nice, warm melons in the field.

Dangerous spiders aside, the reason you can't buy a Bradford Watermelon at your local supermarket is that, unlike its commercial cousins, it's got a thin skin -- which means it doesn't travel well.

So it was forgotten, and it was thought to be extinct.

Except that Bradford Watermelons never stopped being part of Bradford family life. "I grew them as a kid," said Nat. "A hundred watermelons a year. I'd make $500 off of it."

Rediscovering their history convinced Nat, in 2012, to give up his landscape architecture practice, move back to the family home, and grow watermelons for a living. "I have this tremendous family gift; what am I gonna do with it?"

His first decision: To let nature help him grow his watermelons, without using pesticides or irrigation. The most perfect ones, the ones sturdy enough genetically to thrive whatever the summer's weather conditions -- about five percent of the crop -- he set aside to save the seeds.

For Nat Bradford, growing watermelons is about literally growing water -- a life-giving miracle -- which is why he helped to found a charity in parched East Africa called Watermelons for Water.

"The watermelons can take contaminated water that we can't drink and it'll bio-filter it naturally through the root system, through the plant, and store it in these beautiful, green, four-and-a-half gallons of juice in a 40-pound fruit," he said. "That's tremendous."

Last summer, with the help of his five kids, Nat harvested about 2,500 heirloom Bradford melons. Some he saved for seeds; some he sold for eating at $20 each. The rest he turned into pickles, from his grandmother's recipe; watermelon brandy; and watermelon molasses.

Nat's wife, Bette, has begun making (believe it or not) watermelon beer.

There have been Bradfords in this part of South Carolina since before the Revolutionary War. To hear Nat Bradford talk, something about the place has worked its way into his family's DNA: This is the house I grew up in, and the land that's around us is something that I'm attached to.

"When I grew up we knew everybody around us, and there was a sense of community. And I want to make sure that that gets passed down as well as the watermelon."

In Nat Bradford's mind, the one breeds the other.