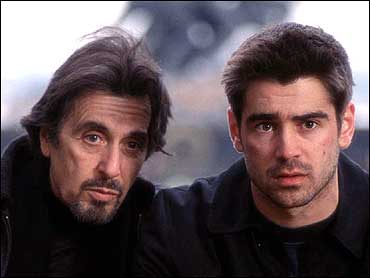 The CIA packed a bit more punch than death in film debuts at the box office.

The Al Pacino-Colin Farrell spy thriller "The Recruit" debuted as the No. 1 movie with $16.5 million in its first weekend. It was closely followed by "Final Destination 2," a fright flick about death stalking young people on spring break, which opened with $16.2 million, according to studio estimates Sunday.

The buddy comedy "Kangaroo Jack" was No. 4 with $9 million, while the previous weekend's top movie, the horror tale "Darkness Falls," fell to fifth place with $7.5 million.

The overall box office was up compared to a slow weekend a year ago that corresponded with the Super Bowl, which generally dampens moviegoing. The top 12 movies grossed $94.7 million, up 20 percent from the first weekend of February last year.

"This was a really strong weekend for a January, which is usually kind of slow," said Paul Dergarabedian, president of box-office tracker Exhibitor Relations. "To have two films over $16 million is not bad at all."

Pairing Pacino with rising star Farrell broadened the audience for "The Recruit," which drew almost equally among the 18-to-25, 26-to-34 and 35-to-49 age groups, said Chuck Viane, head of distribution for Disney, which released the film.

"Al Pacino always delivers a great performance, and when you put him with Colin Farrell, the combination just whetted the appetite of the public on all sides," Viane said.

The sequel "Final Destination 2" easily out-grossed its predecessor, which opened with $10 million in 2000. Distributor New Line Cinema expects the sequel to at least match the $53 million total gross of the original "Final Destination," said Russell Schwartz, president of domestic marketing.