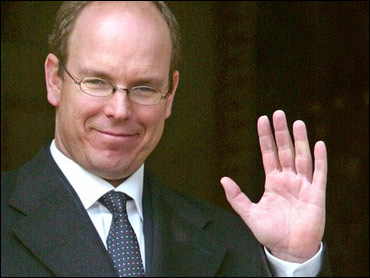 When glamorous Hollywood star Grace Kelly married the Prince of Monaco, her life literally became a fairy tale. Her son's life however, is beginning to look more like a soap opera.

On Tuesday, Monaco's Prince Albert formally takes over the country's throne in a solemn ceremony in the same cathedral where his father, Prince Rainier, was buried just a few months ago.

But Albert's royal reign is beginning on an embarrassing note. Last week, the bachelor prince admitted to having an illegitimate son, born almost two years ago.

The 47-year-old prince was forced to acknowledge his son after a French magazine published photos of him with the boy.

Adding to the scandal, Prince Albert hinted that he might have fathered even more children.

When a French TV reporter asked if there might be others coming forward to claim paternity, he said, "I know there are other people who have nearly the same cases."

Although, Alexandre is now Prince Albert's sole heir, he cannot inherit the throne or carry the Prince's last name, reports CBS News consultant J. Randy Taraborelli, who has written a book about the royal family in Monaco and has interviewed Prince Albert several times. However, the child will receive half of the prince's fortune once Albert dies.

"He is in line for Albert's money, which is billions of dollars," Taraborelli told The Early Show co-anchor Julie Chen. "He will get an inheritance, which is probably one of the reasons why the mother wanted to secure his place in Albert's life."

Here's what is known about the Prince's 22-month-old son: His mother is Nicole Coste, 33, a former Air France flight attendant originally from Togo. She claims that she met Prince Albert on a flight several years ago, and the two had an relationship for five or six years.

Taraborelli reports that Prince Albert signed documents to assure Coste that he would claim paternity of the child after his father's death.

Taraborelli says, "Prince Rainier died in May. Albert said, 'Actually, there is a 90-day mourning period. So I'll wait until that time is over in July.' And she said, no. And she did what a lot of disgruntled European women do when they want to get something off their chest. She went to Paris Match magazine and did an interview, complete with pictures of Albert and the boy, thereby outing him as father of the child."

The news that Prince Albert is a father came as a surprise to the people of Monaco, Taraborelli said. The prince is well-liked by the people of the country, and they believe that they know him quite well. While they are used to scandalous tales about his sisters, Stephanie and Caroline, this is certainly a first for him.

That's not to say that he's led a perfect life, however. Taraborelli pointed out he has been called the "Playboy Prince" because of several high-profile relationships with models and female athletes. The fact that he never married and produced an heir deeply worried his father and prompted rumors among the public that he was gay.

The fact that Prince Albert did not have an heir forced Prince Rainier to amend the state's Constitution in 2002 to allow power to pass from a reigning prince who has no descendants to his siblings. It restricts succession to children whose parents are married. This puts Albert's eldest sister, Caroline, next in line for rule, followed by her oldest son, Andrea Albert Pierre, now 20.