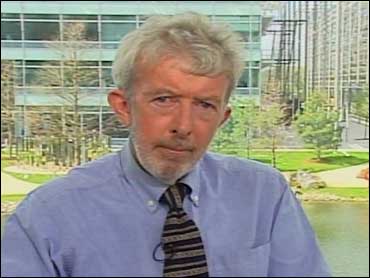 You may have seen him, very briefly, grinning alongside your Presidential candidates, as well as the current incumbent of the White House. You may have wondered who he is, even why he came at all. So do we.

Gordon Brown, Britain's new Prime Minister, hates foreign travel. This is the man whose first visit to Africa consisted of a flight to Cape Town, a speech to a UN conference and an immediate return to London. Away from base he gets very twitchy indeed.

This trip isn't helped by the fact that our country is suffering a crippling credit crisis which he blames on America. Well that's what he tells the increasingly sceptical British press, who no longer regard the man as a strong leader, and are busy commissioning opinion polls which show that a monkey would be more popular.

At least the American media plays it gentle on foreign dignataries. Maybe that's why he came over. Just for a break from the domestic political heat?

Gordon Brown spent ten long years being jealous of Tony Blair and finally, nine and half months ago, got to walk into the limelight of Downing Street.

Trouble is he doesn't do limelight. He looks uncomfortable on camera. He bites his nails and, if you so desire, you can see tape of him picking his nose on You Tube. He may relish a good joke in private, but the public Mr Brown lacks warmth and charisma.

And now that Britain is feeling the economic pinch, opponents have dubbed him the Sub-Prime Minister. There is even talk of getting rid of him altogether.

Meanwhile, in America, he's spelling out his vision of a new world order - a shake up of institutions like the UN and the World Bank. He would love the support of all three Presidential hopefuls in this lofty ideal. But there's no votes in backing a potential loser. And the timing of this particular trip is lousy -- move over Mr Brown, Pope Benedict's in town.
By Ed Boyle