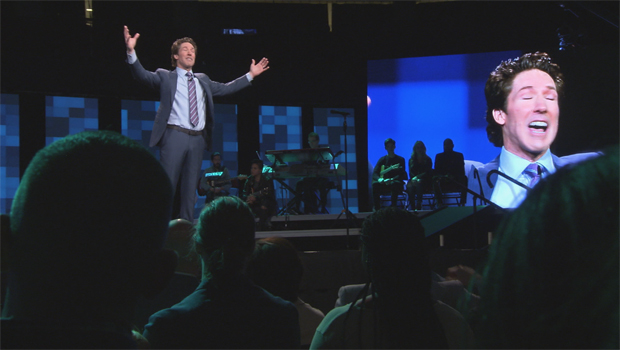 With inspirational messages Pastor Joel Osteen has built a loyal following ... both in person and on television ... you'd hardly know that he ever doubted that the ministry would be his calling. Tracy Smith has our Easter Sunday Profile:

Every Sunday morning, as the light comes up over Houston, a capacity crowd fills the biggest church in town ... and their pastor, televangelist Joel Osteen, prays it all goes well.

And it seems, to some at least, that God has been listening.

Osteen, with wife and co-pastor Victoria, leads Houston's Lakewood Church, now the largest congregation in the United States. More than 40,000 members show up every week to hear Osteen's message of hope, usually delivered with his trademark smile.

"God is not in the condemning business; He's in the restoration business

His sermons are relentlessly positive, and that's made him a target of critics, who say Osteen sometimes sounds less like a preacher and more like a motivational speaker.

"You've been criticized for 'Church lite,' for 'a cotton candy message,'" said Smith. "Do you feel like you're cheating people by not telling them about the Hell part? Or repentance part?"

"No, I really don't, because it's a different approach," Osteen replied. "You know, it's not hellfire and brimstone. But I say most people are beaten down enough by life. They already feel guilty enough. They're not doing what they should, raising their kids -- you know, we can all find reasons. So I want them to come to Lakewood or our meetings and be lifted up, to say, 'You know what? I may not be perfect, but I'm moving forward. I'm doing better.' And I think that motivates you to do better."

And if anything, his flock seems to be growing: Osteen personally leads three services a week, for the thousands at the church, and for millions more on TV, the Internet and radio, making him one of the most-watched religious leaders in America.

After every service, the Osteens make their way to the church lobby to meet what is typically a few hundred who wait on line for a little face time, a blessing, or just a word of hope for someone going through a hard time.

Whatever you think of Osteen's theology, you can't deny his ability to connect to his followers.

"One time I thought he was looking at me, and I'm like, he's talking about me!" one man said.

And the church is only part of his ministry. His eight books, including his latest, "The Power of I Am," are all bestsellers, and have made Osteen so much money that doesn't need to touch the Lakewood collection plate.

He says his personal wealth comes from the books and other projects, like with Sirius Radio. "But I do think there is a certain thought, especially in the church world, that you're supposed to be poor and broke and defeated to show that you're humble. And see, I don't buy into that," he said.

"You purposely don't ask for money on TV," said Smith. "But people send it anyway?"

"People send money. They buy the product or they support the ministry. Yeah, you know, just an unbelievable amount that keeps it all going."

"Do you think if you stood up there and said, 'Please don't send money,' people would still send money?"

When asked what happens to the money taken in by the ministry (from which he does not take a salary), Osteen said, "In just big broad terms, $30 million goes to the TV effort. What's left, it's paying staff, it's supporting missionaries and missions' work, it's just the organization of making it go. So if we bring in, you know, $90 million this year, we will spend $90 million."

"You said $90 million? Is that a good estimate of what you'll bring in?"

What might be even more amazing is that Osteen never dreamed he could be a preacher -- and he never even wanted to try.

Born a minister's son in 1963, Joel Scott Osteen grew up in Houston watching his dad, Pastor John Osteen, founder of Lakewood Church, and a preacher with a more traditional style.

Dad, of course, wanted Joel to succeed him as pastor, but Joel never saw himself at the podium. Instead, he studied TV production, and helped get his dad on the air every week.

In the meantime he met his future wife, Victoria Iloff, as she was working the counter at a jewelry store her parents owned. Their very first date: a basketball game at Houston's Compaq Center.

"My mother called at 2:09 in the morning, and she said, 'Joel, Daddy's had a heart attack over at our house,'" he recalled. "And, I went there and, you know, the fire trucks are there and, you know, my dad was there on the ground and they were shocking him and all that stuff. But I knew he was gone. You know how you just know it?"

After the funeral, Osteen says he felt called to stand in his daddy's shoes.

"I'm not saying I was that great at it. But immediately, there was just momentum. And it's almost like it never stopped."

In fact, under Joel Osteen, the church grew so quickly that in 2003 they leased the then-vacant Compaq Center, and turned it into the church's current home.

It's a family business. The Osteens' two grown children are part of the Lakewood ministry. Osteen says his dad would have loved it all: "He used to call me and sometimes tell me how many were in attendance or what an offering was or something. And I think, 'Oh man, Daddy, if you could see it now!'"

The Osteen message seems to resonate outside the Bible Belt as well. Last week, he held an event called "Night of Hope" in Newark, New Jersey.

"You know, sometimes you just need the basics," said one attendee. "And I think that some people have the ability to deliver the basic principles that's needed for Christianity, and Pastor Osteen definitely can deliver that."

"You don't sell tickets to go to church," Osteen said, so attendees are charged the lowest price possible. "They buy their ticket, they get their seat, and we move on."

It's worth noting that the Newark event was completely sold out.

Back in Houston, not far from the church, the Osteens usually try to spend their Sunday afternoons at home with their extended family.

Smith asked Joel and Victoria, "Now you guys live together and you work together. Is that always smooth sailing?"

"Yeah. I think there's things, you know, I've learned: Let her be right."

But what Joel Osteen's really learned is the same message he preaches to others: Life can be pretty great if you keep looking up.

"You know, my dad was very, very poor," he said. "No milk, no food, no heating in the winter. And you know what? He stepped up. And he had a big dream for his life. And look what he's done for us. And so that's my whole thing is, you don't have to stay there. You gotta believe that you can rise higher."