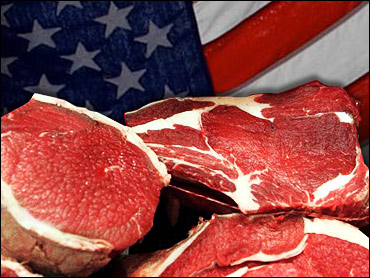 The dairy industry contributed to most members of a key House committee who voted nearly in lockstep against banning the sale of meat from ill or disabled animals, like the one that tested positive last week for mad cow disease.

Of the 33, 28 voted against the ban on marketing "downed" animals, four voted for it and one didn't vote, when it was defeated 202-199 in July. The Senate approved the ban on a voice vote in November, but it was left out of the final compromise passed by the House this month and awaiting action in the Senate.

Most "downers" are old dairy cows whose meat can bring farmers a little extra revenue. The Agriculture Department estimates that 130,000 are brought to slaughterhouses every year, and that those showing signs of mad cow disease are tested.

To prevent disease, the government prohibits processing the brain and spinal cord of such animals — the pathways for mad cow disease — into meat.

Congressional supporters of the ban have warned that downed animals are more likely to have mad cow disease, a brain-wasting illness. In addition, animal rights advocates oppose the sale of downed animals because they say so many are injured or ill that they must be dragged by chains or forklifts to the slaughterhouse.

So far this year, the Dairy Farmers of America PAC has made contributions to 27 Agriculture Committee members, and another, National Milk Producers Federation PAC contributed to 17. Some members received money from both groups as well as from smaller dairy PACs.

Neither of the large dairy PACs returned phone messages seeking comment. Wisconsin is second in milk production and Minnesota fifth in the nation.

The committee's chairman and its ranking Democrat, who led the debate in the House against the downed-animal ban, received the most contributions.

During floor debate in July, Stenholm lectured New York Democrat Gary Ackerman, author of the proposed ban in the House, that he did "not understand the cattle business," and argued that most downed animals are merely lame.

Ackerman said Friday that Agriculture Committee members thought they were protecting the cattle industry but wound up hurting it.

"The amount of money farmers would have lost euthanizing these poor, wretched animals, they lost the other day in five minutes," he said, referring to overseas bans of U.S. beef.

Goodlatte said his opposition to the bill had nothing to do with the dairy industry's position.

Rather, he said, he was worried that the ban would prevent the discovery of an animal with mad cow disease, known formally as bovine spongiform encephalopathy.

"The only place it's discovered is when the animal is delivered by the farmer to a slaughter facility and presents indications that it might have some kind of an illness," Goodlatte said. "That is exactly what happened in this case."

Gene Bauston, president of the New York-based animal rights group Farm Sanctuary, argued that the time to test the animals is not at the slaughterhouse — where they can enter the food supply before the tests come back — but at the farm. Ackerman's bill called for such animals to be treated by a veterinarian at the farm or be euthanized.

"It's clear that the dairy industry has very much influenced the action of key members of Congress," Bauston said. "In light of this recent discovery, we hope that members of Congress will serve the public interest instead of the shortsighted interests of agribusiness."

Fast food chains such as Wendy's, Burger King and McDonald's don't accept meat from downed animals, and the Agriculture Department prohibits it in the federal school lunch program.

Mad cow disease is caused by a misshapen protein that creates tiny holes in the brain, making it look like a sponge. People can get a related illness, variant Creutzfeldt-Jakob disease, if they eat meat containing such tissue of an infected cow. In Britain, 143 people died after an outbreak of mad cow disease in the 1980s and 1990s.