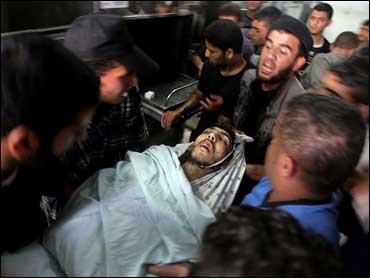 
"This is a street fight. The more street corners you control, the more you show you have the upper hand." That was one senior administration official's description of the ongoing power struggle between Hamas and Fatah, the two main factions in Palestinian politics.

The fighting has ramification on several levels, and each intersects with the others.

First, innocent civilians bear the brunt of such fighting. Palestinians in Gaza are caught in the daily crossfire. Zaki Chehab, the London bureau chief of Al Hayat, speaking this week at the Saban Center of the Brookings Institution in Washington, said while the situation is chaotic, it is not hopeless. Khaled al-Yazji, a former Palestinian Authority official in Gaza, said while the situation is very difficult, that "doesn't mean we shouldn't do anything." Questioned about why Mahmoud Abbas, president of the Palestinian Authority and a leader of Fatah, cannot do anything to stop the fighting, al-Yazji said "you are asking him to do something outside his capability." The fact is that Abbas has been either unable or unwilling to exert power in such a way that he can override opposition by Hamas.

Even as Hamas and Fatah fight each other, Hamas or other radical elements in Gaza continued to fire homemade Qassam rockets into Israel. Israeli officials say nearly 70 rockets have landed in Israel this week, most of them in or around the town of Sderot. Casualties, these officials say, have been minor but the wounded include children and pregnant women. After a period of self-restraint, the Israelis responded late this week, using air-launched missiles to attack Hamas security positions and personnel in Gaza. It is no surprise, say American officials familiar with Hamas' tactics, that Hamas would continue to try and draw the Israelis into the fight and follow that by blaming the Israelis for resulting casualties.

Where is the diplomatic effort to stop the fighting? President Bush has called on both sides to end the escalating violence, and Secretary of State Condoleezza Rice telephoned Israeli Prime Minister Ehud Olmert and President Abbas to urge restraint. In the past six months, Rice's burst of diplomatic energy among the parties has been focused on getting Israelis and Palestinians back to the negotiating table. Rice even managed one three-way meeting with both Olmert and Abbas, but it is clear that ongoing fighting — even if it is limited to Palestinian-on-Palestinian violence — is not conducive to making diplomatic progress. It is also clear that telephone calls from Washington are not going to solve these power struggles.

A newly-approved program by Congress to provide $40 million for training and equipping Abbas' Presidential Guard forces is not up and running yet — and there is no guarantee, once they are deployed, that those forces will be able to prevail against Hamas' fighters.

The current dysfunctional nature of Palestinian governance in the West Bank and Gaza is clear for all to see. Khaled al-Yazji says "the Palestinian Authority doesn't exist anymore. It just exists in our minds. There are no services. No salaries. ... Everyone should realize it. There is no Authority."

That's one way of looking at it. Zaki Chehab, taking note that Hamas' leader, Kahled Meshaal, lives in Syria, puts it another way: "The money is in Damascus — and the power is where the money is."

The senior administration official who has watched this scenario play out before simply says the power struggle will continue. "At the end of the day, it's all about guns and bullets. And whoever has the most will end up on top."