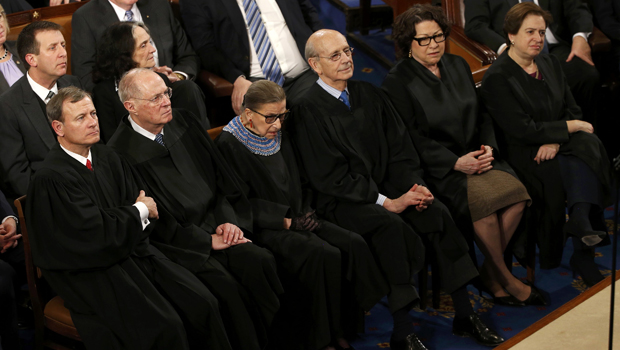 In the next few years, the Supreme Court may face as many as four vacancies as some of the justices age or enter retirement. That means the outcome of November's elections could be critical in determining the court's future composition.

Nearly half of the court -- four of the nine justices -- has served on it for 20 to 30 years and are either over the age of 80 or approaching it.

While stumping for Hillary Clinton on the New Hampshire campaign trail on Monday, former President Bill Clinton mentioned the next president could nominate between one and three justices. His wife's campaign posted a blog post last month titled, "A Republican president could nominate as many as 4 Supreme Court justices. That should terrify you." But it's not only the president who plays a role; the appointee must be confirmed by the Senate, with 60 votes needed for a procedural vote, followed by a simple majority for the final vote.

"I think there's no denying the next president is likely to have a very significant impact on the court," Stephen Wermiel, a constitutional law professor at American University, said.

That means the next president could influence whether the court maintains its conservative edge.

On the one hand, there could be two liberal vacancies.

Ruth Bader Ginsburg, who will be 83 by the time the next president is sworn in, is the oldest justice on the current court. Ginsburg, who was appointed by Bill Clinton, has had more than her fair share of health issues from colon cancer in 1999, to pancreatic cancer in 2009, to her hospitalization in 2014 when she had a heart stent implanted to clear a blocked artery. Just a few months before that happened, she told Elle magazine she wouldn't retire while President Obama remains in office because Senate Republicans would block her replacement.

"Who do you think President Obama could appoint at this very day, given the boundaries that we have? If I resign any time this year, he could not successfully appoint anyone I would like to see in the court," she said.

Justice Oliver Wendell Holmes, Jr., who served on the high court between 1902 and 1932, was the oldest person to serve. He was 90 when he retired.

Stephen Breyer, the other Bill Clinton appointee, will be 78 next year. In an interview last September with the National Law Journal, he said he will retire at some point.

"I guess at some point I will retire. You want to know when. I don't know. I will figure it out at some point. How do I know? Normally it is a personal decision...and I will make it personally at some point," he said.

On the other hand, there could also be two conservative appointees who step down.

Antonin Scalia, who will be 80 next year, is considered by some to be the most conservative. Appointed by President Ronald Reagan in 1986, he is the longest-serving justice on the current court. In a speech at the University of Minnesota in October, he said he'll retire when he senses the quality of his work is declining.

"As soon as I think I'm getting lazier and I just can't do the job as well, I'm going to get off there. I want to preserve whatever reputation I have," Scalia said, according to the Associated Press.

Anthony Kennedy will also turn 80 next year. He was also appointed by Reagan, who was idolized as a conservative president, but Kennedy has been the critical swing vote at the Supreme Court, periodically voting with his liberal colleagues.

"He's been there for a long time -- about 30 years," said Jesse Choper, Earl Warren professor of public law, emeritus, at the University of California Berkeley. And Choper thinks that Kennedy's replacement, more than any of the justices, would make a big difference on the court.

If a Republican is elected president and is able, in conjunction with the Senate, to replace either Kennedy or one of the liberal justices, Choper said, "things would change dramatically." But a new Democratic president could have a similar impact.

"If you were to replace one of the conservatives, Kennedy or any of them, with a liberal, then you would have a radical change going forward and you may even have some changes going backwards," said Choper, who pointed out that a court with a liberal majority could reverse earlier cases.

Hillary Clinton, for example, has repeatedly promised to appoint liberal justices who would overturn the Supreme Court's 2010 ruling in the Citizens United v. Federal Election Commission case, which allows corporations to spend unlimited amounts of money to influence federal elections.

There have only been two cases in the last quarter century in which a seat on the court changed ideologically, both appointed by Republicans. George W. Bush named Samuel Alito to replace swing vote Sandra Day O'Connor in 2006, and his father, George H.W. Bush nominated Clarence Thomas when liberal Thurgood Marshall retired in 1991.

Of course, the Senate also hangs in the balance and whichever party holds the majority will also be key. Even so, if a Democrat is elected in November, and the party takes back the Senate as well, it still won't be so easy to put a liberal on the court. Republicans could filibuster any Supreme Court nominees that she might appoint.

A more conservative court could also wield significant power. Right now, Wermiel said there are probably four votes to overturn Roe v. Wade or to abolish affirmative action. If they get a fifth conservative vote, he said, he doesn't think the court would hesitate to review those issues.

"Depending on who is replaced and by what president, the impact could be huge," he said.