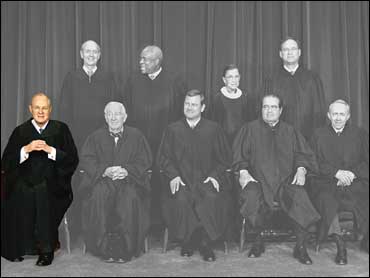 If you are, like me, watching the American Movie Channel's fascinating series "Mad Men," you know that a recent episode offered a look back at some of the television advertisements used by campaign officials in charge of John F. Kennedy's 1960 presidential bid.

We all might as well get used to singing "Kennedy, Kennedy, Kennedy, Kennedy" as we embark upon another great crusade that is the 2007-2008 term at the United States Supreme Court. This term, perhaps even more than the last one, Justice Anthony Kennedy is sure to leave his mark in the law as the author (or at least swing vote) in a series of predicted 5-4 decisions.

Forget the hullabaloo over Justice Thomas on the right or Justice Stevens on the left. Ideological alignments being what they are these days, it's Kennedy's legal world - we are just living in it.

For example, Kennedy almost certainly will cast the deciding vote in Baze v. Rees, a Kentucky case that will shape the nation's lethal injection procedures in capital cases for years to come. At issue in the Bluegrass State is whether the Commonwealth's injection "cocktail" - the mix of drugs given to condemned prisoners on the day of their execution - is administered in the right order with the right dosages to ensure that the prisoner does not run afoul of the 8th Amendment's ban against "cruel and unusual punishment"

The four more conservative Justices on the Court almost certainly will declare that each state is free to develop its own protocols for putting condemned inmates to death, and that executions by definition cannot be free from pain and suffering on the part of the executed. The Court's more liberal members, on the other hand, likely will call for stringent requirements that prison officials must meet before they can continue to execute people in this fashion.

I'm betting that where Justice Kennedy comes down in Baze will determine which side wins the case. And, if you are looking to the past for any sense of the future, remember that Justice Kennedy voted to ban the execution of mentally retarded death row inmates as well as those capital murderers who killed before they were 18 years old. It's a case that has huge national significance - several states, including Florida and California, already have halted capital punishment until they can ensure better injection protocols.

The Justices this term will also tackle several important cases with electoral and political ramifications. Just last week the Court announced that it would hear and decide - in time to make a difference in the 2008 presidential election - a voter fraud case out of Indiana labeled Crawford v. Marion County that will ripple into Michigan and other states with similar legislation. Lawmakers in the Hoosier State passed a new measure that requires voters to show government-issued photographic identification at the polls. Six other states require photo IDs and 20 more require some sort of identification, barriers to voting that did not exist prior to the 2000 election recount fiasco in Florida.

Republican politicians - and inevitably conservative judges - say a state's interest in ensuring that there is no voter fraud trumps any inconvenience caused by requiring the IDs. Democratic politicians - and inevitably liberal judges - say that the law was passed by Republicans in order to make it more difficult for the poor and minorities (by the way, traditionally Democratic voters) to have their votes counted. The Democrats say that Indiana's law focuses upon folks who show to vote but does not cover folks (traditionally Republicans) who vote by absentee ballot. Justice Kennedy almost surely will be in the majority here, too.

In fact, politics and the law meet right away - on the first day of the Court's calendar for the term - when the Justices consider a case out of Washington that involves a challenge to that state's rules allowing candidates to declare their affiliation to a party without that party's consent. The Justices also will hear a remarkably similar case out of New York. Should a candidate have a right to "freely associate" with the party of her choice under the First Amendment? Or does that right belong to the party itself? We'll know in a few months.

Thanks to a Missouri case involving a business deal gone bad we'll also know in a few months what the Court thinks about allowing investors to sue "third-parties" like lawyers and accountants and bankers when the companies those professionals represent commit securities fraud. In this post-Enron world, a victory for the investors could open up those sorts of professionals to huge liabilities and change the way they interact with publicly-traded companies. A victory for the company would severely limit the ability of investors to recoup their money when a business venture goes south for the wrong reasons.

Speaking of the wrong reasons, we come now to three cases which legal scholars and historians likely will focus upon after this term has come and gone. In one case, the Court will interject itself in a dispute between the White House and (get this) the state courts in Texas (of all places) over the scope of jurisdiction domestic courts must afford to rulings by the International Court of Justice. President Bush says that Texas must comply with an ICJ ruling that directed the Texas courts to reconsider a case of a Mexican national who was convicted and sentenced to death in the Lone Star State without being afforded the right to meet with a consular official. Bet on the President in this one.

But don't bet on the President when it comes to the two consolidated terror law cases the Court has agreed to consider. The Justices will tackle the legitimacy of certain provisions of the Military Commissions Act of 2006, a shoddy piece of legislation hustled through a lame-duck Congress. The Act stripped vital habeas corpus rights - the right to go to federal court to challenge detention by the government - away from terror suspects and others. With Justice Kennedy leading the way, I suspect a majority of Justices will declare that the legislators overstepped their authority.

What else? The usual stuff. The Court will once again try to figure out federal sentencing rules and in the process sort out a mess the Justices themselves created when they declared a few years ago - again, in a Kennedy opinion - that the Federal Sentencing Guidelines were no longer mandatory. Of particular issue in the case is whether a Reagan-era sentencing policy that requires judges to sentence defendants convicted of crack cocaine crimes at a 100-1 ratio of those convicted of "powder" cocaine crimes.

The Justices also will hear at least one employment discrimination case, several tax cases, and one case out of Louisiana with some particular resonance now that we have endured the saga both of the Jena Six and the latest O.J. Simpson caper. Seems a local prosecutor down there, after striking from the jury pool all black candidates, twice mentioned Simpson's name and compared "the Juice" with the defendant, a man named Allen Snyder. Not surprisingly, Snyder was convicted and sentenced to death. Also not surprisingly, he sued for help: no doubt Snyder hopes it truly is Justice Kennedy's world so that he can keep living in it for the rest of his natural days.
By Andrew Cohen