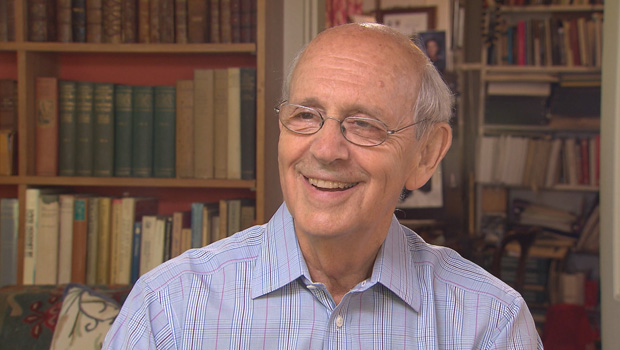 Supreme Court Justices have a lot of experience asking questions -- and here asking Justice Stephen Breyer some questions is our correspondent Jan Crawford:

It's been called the "House That Breyer Built" -- and in many ways, the federal courthouse on Boston Harbor reflects the philosophy and mission of Supreme Court Justice Stephen Breyer.

"What was basically important was to make the public understand that this is their building," Justice Breyer said. "It belongs to the public."

More than two decades ago, before he became "Justice," Breyer was the chief judge of the Boston-based federal appeals court, and helped lead the design of the $200 million courthouse.

"It's open, there's a transparency," he said, because, "The law should be transparent."

Down in the basement, there's a wall engraved with names, not of the court's judges, but of the people who worked on the building. "The bricklayers, the carpenters, everybody," Breyer said. "Everybody's here. I'm here, too."

"'Cause you're just a worker?"

Since President Bill Clinton appointed him to the Supreme Court in 1994, Breyer has made it his life's work to give the American people a better understanding of the law, and of a court that can seem as impenetrable as the imposing stone edifice that houses it.

Crawford spoke to Breyer at his home in Cambridge, Massachusetts, just days after the Supreme Court refused to take up the case of Kim Davis, the Kentucky county clerk who has defied the court's decision authorizing same-sex marriage. She has claimed "God's authority" in her refusal to issue lawful marriage licenses.

Breyer recalls past cases that drew controversy, and those that led to widespread resistance.

"I do try often to tell people the story of Little Rock," he said. "How President Eisenhower had to send the paratroopers in order to take those nine black children and get them in that white school. That's called the rule of law."

Not long after joining the court, Breyer strongly disagreed with the Bush v. Gore decision that decided the 2000 presidential election.

"I wrote a dissent, and the dissent in that case explained why I thought the majority was wrong on the main issue, which was whether the voting would continue," he said. "Despite that, people did follow it. And I'll get that question at universities and I'll tell them just what I said to you: 'I know what you're thinking -- about 20 percent of you are thinking, 'Too bad, there should've been a few riots.'

Breyer has just written a new book, "The Court and the World: American Law and the New Global Realities" (Knopf), which argues that while our nation's justice system remains an example to other democracies, it must also evolve to meet the demands of a rapidly-changing world.

That puts him at odds with conservative Justice Antonin Scalia -- a familiar place for Breyer. He's not only known as a liberal-leaning justice, but also the one most willing to publicly debate Scalia and other Justices who adhere to "Originalism" -- a philosophy focused on the original understanding of the Constitution. Breyer thinks the meaning of the Constitution can change with the times.

The contrast was clear earlier this summer, when Breyer said the Justices should rethink the constitutionality of the death penalty -- a punishment accepted by the founding fathers.

Despite the occasional harsh language, the Justices generally get along. Scalia is famous for his barbs, but by now, the others take it in stride. "He suffers from a disease which is called 'Good Writers Disease,'" said Breyer. "When a person is a good writer, as he is, and when he finds a felicitous phrase, he cannot give it up. It's like a good comedian. If you find a good joke and you're a comedian, you just can't give it up."

Breyer says the traditions of the court help maintain its collegiality: before taking their seats on the bench, the Justices always shake hands.

After oral arguments, they gather in a private conference to discuss the cases and cast initial votes.

"The two rules are, nobody speaks twice 'till everybody speaks once [at conference], and the second is tomorrow is another day. You and I might have been absolutely at loggerheads in case A. The fact that we were at loggerheads has nothing to do with case B. B, unrelated legally, we could be absolute allies."

To be sure, the nine all have different styles, and it may not surprise you to hear Breyer, the former professor at Harvard Law School, say he is a talker.

"You do your best thinking by kind of talking things out?" asked Crawford. "Where does that come from?"

Breyer also pointed out his father's watch, which he wears every day: "Says, 'Irving Breyer, legal advisor, San Francisco Unified School District, 1933-1973.' So I grew up in a family focused on the public schools of San Francisco."

"So what would your parents think of you being on the Supreme Court?" Crawford asked.

"What was the first?"

"Stay on the payroll!" Breyer laughed.

After 21 years on the court, Breyer, who is 77, shows few signs of slowing down. In the summers, when the court is in recess, he works from home in Cambridge. His office is full of old books and a few gently used toys, such as his granddaughter Angela's doll house.

Crawford asked, "Do you think about retiring?"

"And are you going to any time soon?"

"I will eventually!" he laughed.

"We saw this with Justice Ginsburg. So many people are saying, 'Why don't you just step down so President Obama can nominate your replacement?' But Justices don't really think that way, do they?"

"It's not really our job," Breyer replied. "Your job is to treat administrations not as political entities, that you favor some politician or you disfavor another politician. You try that for 21 years. And then you see that whatever instincts you might have had coming to the bench for one political or the other political side diminish."

"What happens to you?"

Especially when he sees the stakes as nothing less than the future of our democracy: "It requires education. It requires my generation and yours passing onto our children and grandchildren what it's like to live in such a country. And does it work perfectly? Of course not. Of course not. When the thing doesn't work perfectly, you keep working at it."