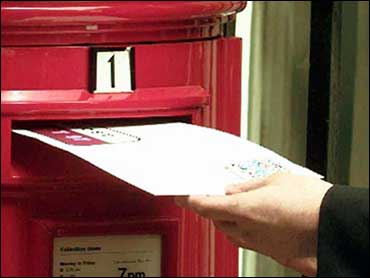 Have you ever met your mailman? Does he (or she) walk with a stoop? Groan in pain and then call an attorney?

These are serious questions here in Britain right now, and the answers could lead to a fundamental change in the way we write letters. Indeed some people may decide never to send a letter again.

Mr. Alan Pugh is a British mailman. He went on his rounds one day and opened one of our famous bright red mail boxes. In it was a bundle of envelopes – each one this size, all correctly addressed, and stamped. But there were quite a lot of envelopes – 270 to be precise – and Mr Pugh felt a sharp pain in his shoulder as he lifted them up. So he called in the medics, took the rest of the week off and then got hold of his trade union... and his lawyer.

A few days later the sender of the envelopes received mail of his own. The text was decidedly threatening: "We consider that you were negligent in failing to appreciate the risk to our client of posting so much mail into a single collecting box. We seek punitive damages."

But this case is odd.

We're talking about 50 lbs. in weight. That's no more on the scales than an average child. And mailmen aren't usually considered to be delicate wimps.

So, what's it really all about? Well, each of those 270 suspect envelopes contained a magazine: no, not that sort of a magazine - more an obscure learned journal. They were despatched by the editor of the British Society for the Study of Religions ... just before Christmas. The forthcoming trial is already being billed as "Mailman versus God."