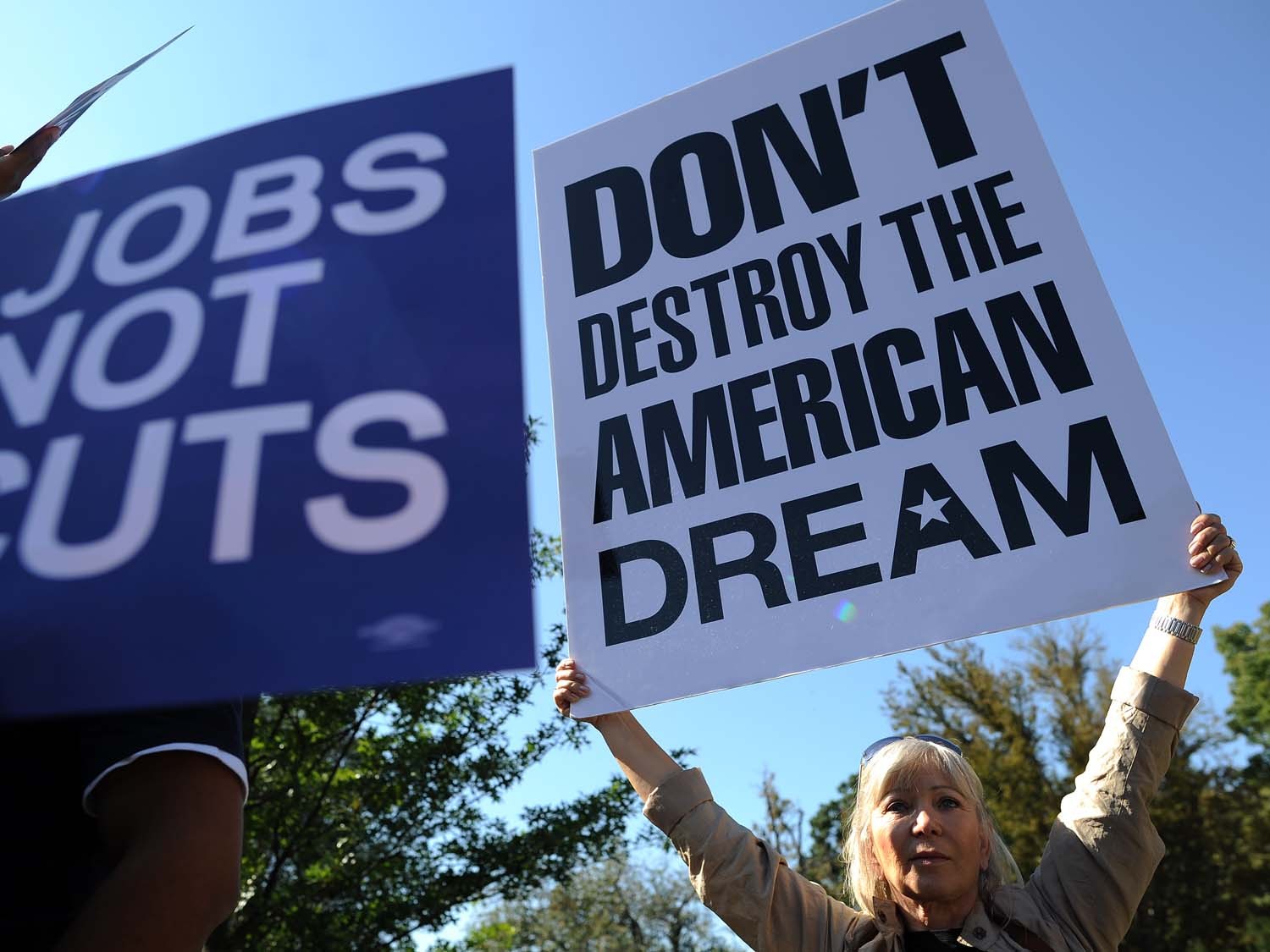 The couple hundred participants at Wednesday's Rebuild the Dream rally on the southwest lawn of the U.S. Capitol raise their fists defiantly as they shout. Some hold blue, pre-made signs bearing the phrase, "Jobs, Not Cuts," and the letter "A," the logo for Rebuild the Dream, the organization led by former Obama administration green jobs czar Van Jones.

The people here are waiting for Jones and his cast of speakers to get the rally going. In the meantime, the chants continue.

This isn't Occupy Wall Street, the youth movement with overtones of anti-capitalism and tinges of anarchism taking place in New York, Washington, and other cities across the country. Rebuild the Dream is more standard issue progressive grumbling for more spending. The goal isn't revolution against the capitalist system but refinancing the American welfare state.

Barbara Jackson, a 42-year employee of the Social Security Administration and a member of Local 3615 of the American Federation of Government Employees (AFGE), tells me before the rally what's at stake.

"They are planning tremendous cuts to Social Security," she says. I ask her which bill is cutting Social Security benefits, but Jackson says she is talking about the five percent cut across the board for all federal agencies. "Cutting the number of workers we've got," she says. "Closing some Social Security offices. Closing the office a half an hour early. That's detrimental to people that are coming in to file Social Security."

And these cuts to federal agencies aren't helping. "We've already sacrificed $60 billion already," says Bob Nicklas of the AFGE PAC. "We've contributed $60 billion towards solving any financial problems that we've got. And it's the working people of this country that we keeping asking to sacrifice. And if all the billions of dollars that were out there were put into creating good jobs, not just low-paying jobs, and those people were paying taxes, we could work our way out of this."

So is there a message this rally is sending to President Obama? "The president is the president," Jackson says. "He's doing the best that he could do considering what he was facing."

"I think he's doing exactly what he should be doing," says Nicklas. "He's out, and he's stumping around the country. He's got a strong message: 'Jobs, Jobs, Jobs.' It's a perfect counter to 'Cut, Cut, Cut.'"

Who's holding up the recovery? You know whom.

"I'm very alarmed that the Republicans, and particularly the right-wing Republicans, are blocking investment in America on the excuse that austerity is needed," says Bill Berkson of Reston, Virginia. He has a sign calling out "RepubliCONS" for "conning the country since 1980."

"We're going to have a deep depression very soon," says Douglas Cook, who's holding a sign that says "The Fascists Are Coming." "And it's all because of the Republican program of making the rich richer and the poor poorer."

Not surprisingly, Democratic members of Congress like Keith Ellison and Sheila Jackson Lee are more comfortable appearing here than at the Occupy D.C. rally across town.

"These movements, they have a different origin, but the spirit is similar," says Ellison after speaking to the crowd. "We've had 4 million foreclosures, and folks who are out on Occupy Wall Street are concerned about that, are standing up to try to do something for the poor and the middle class." Would he appear at an Occupy rally? "I certainly would," Ellison replies.

"You have a general uprising of typical Americans who are saying, look, the system we have is broken, we need it to be fixed, there are proposals to fix it," Asher says.

And to Sheila Geist of New York, all of these protests and rallies are the start of something big. "This is the launching of a movement," Geist says. "One of whose goals is more jobs, good jobs, green jobs, jobs that you can have with dignity to live a dignified life."

There is one person here who may represent the best link to both movements. Tall and young, clad in a black cape and a black mask, he calls himself the "Master of Degrees," one of America's "millions of unemployed superheroes."

"My actual degree is in urban planning and international development from MIT," says Master, showing me the papier-mâché ball and chain attached to his belt. "I'm fighting to free the next generation of students from debt slavery."

He says young people, like those in the Occupy Wall Street movement, have taken out massive student loans only to find they have no means to pay them back once they enter the workforce. "The problem is that we're having an entire generation of people who cannot choose to do work for social good," says Master. "They can't be pro bono lawyers, they can't go teach in inner city schools to teach English, because they won't be able to afford it. They're going to have to be paying back their debt instead of actually investing their passion and their labor in renewing America as every generation of youth does."

But Master is a little more practical than his fellow protesters on Wall Street, which explains why he's here at the Rebuild the Dream rally. He says there are policy solutions to these problems. "We need to eliminate a lot of the corporate loan agencies that are gouging students," he says.

Still, Master says that beyond the policy goals, the meaning of this movement is, well, more meaningful. "I think what the kids on the street are asking for is for us to reevaluate not just our policies but our entire value system from the ground up," he says. "They're looking for a cultural change, more than just a policy or a political change."

It's a lofty goal more at home with the Occupy kids. For now, Rebuild the Dream just wants jobs and not cuts. "Pass the jobs bill!" the crowd shouts again.

Bio: Michael Warren is a reporter for The Weekly Standard. The opinions expressed in this commentary are solely those of the author.