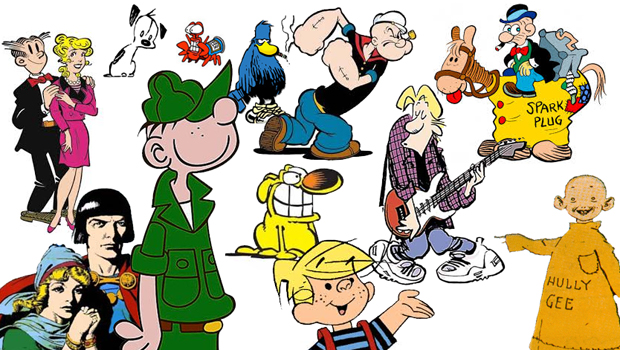 Even on a weekend with grim news, the Funnies can provide a welcome diversion. With Rita Braver this morning we'll mark a comic milestone:

They are names many of us have grown up with: Blondie and Dagwood, her sandwich-making husband. Popeye taught us to eat our spinach. And Dennis the Menace became synonymous with mischief.

"To this day people know Dennis the Menace," said King Features Syndicate editor Brendan Burford. "I mean, you might have a child and describe him as a Dennis. I think that comics gave people a way to talk about who they are, or talk or compare themselves to someone."

And one thing that these and hosts of other comic strip characters, like Krazy Kat, the Katzenjammer Kids, and Betty Boop have in common is that they were brought to us by King Features Syndicate.

"We have about 65 comic strips right now," said Burford. "And over the years we've syndicated hundreds of different comic strips."

The syndicate was created one century ago by the brash and bold newspaper mogul William Randolph Hearst.

"He was audacious -- I mean, he was the original media tycoon," said Burford. "He understood something about connecting to the masses and giving them what they want."

Turns out, they wanted the funnies, as Hearst figured out when he stole "The Yellow Kid" from rival publisher Joseph Pulitzer.

It was 1896 and the first color Sunday supplement featuring the Kid and other strips sold 375,000 copies of Hearst's New York Journal. Hearst realized he could get a group of newspapers to share the costs of hiring a stable of comic strip artists.

"He said, 'I can collect these and send them out to the world, essentially.' And he did that," said Burford.

By 1915, Hearst had formed the King Syndicate to distribute comics and other features. There were existing syndicates, but King became, well, the King -- and still is, with comic strips now published in 2,800 newspapers in more than 70 countries.

But the longest-running comic strip in history drawn by ONE artist is Beetle Bailey, that slothful, perpetual Private.

At age 92, Mort Walker has been drawing Beetle and his cohorts at Camp Swampy for 65 years!

Braver asked, "You were in the military -- were you as big a goof-off and goldbrick as Beetle Bailey?"

"Where do you think I get the inspiration?" Walker replied. "And lazy! I was always takin' a nap, I didn't care where I was."

"Why do you think people are still reading the strip?"

"Well, what I like to think is that I keep coming up with things that make 'em laugh."

Today, his sons, Brian and Greg, work with him on both Beetle Bailey, and a strip Walker co-created in 1954 called Hi and Lois.

"It was kind of about our family," said Brian Walker. "I could see things that happened in our family life would end up in the comic strip."

Today's comic strips must reflect the past -- and the present.

So, is it hard walking that line? "It can be," said Greg Walker. "There's always changes. Everybody's got a cell phone now, and computers and all that."

In fact, to attract younger readers, comic strips have jumped the digital divide, now appearing online and even as apps.

When asked if he thought comic strips in the future will be online and not in newspapers, King Features' Brendon Burford replied, "Well, I've always had a very agnostic attitude about this. Wherever they might want to digest this stuff is where we're gonna be."

And at the recent Comic Con in Manhattan, drawing legions of youthful fans, King Features artists were busy autographing a new book celebrating the syndicate's centennial, "King of the Comics: 100 Years of King Features" (IDW Publishing).

Today, strips like Ray Billingsley's Curtis show how cartoonists and their characters have become more diverse.

"This hasn't actually been an industry where there's been a lot of inclusion," said Billingsley.

But above all, it's really only the QUALITY of the comic strips that can keep readers coming back for the next 100 years.

"What we have to do is lure them in with good work, good characters, something that is fun to look at," said Billingsley. "Not always humor humor, but things that make people think, and to feel."