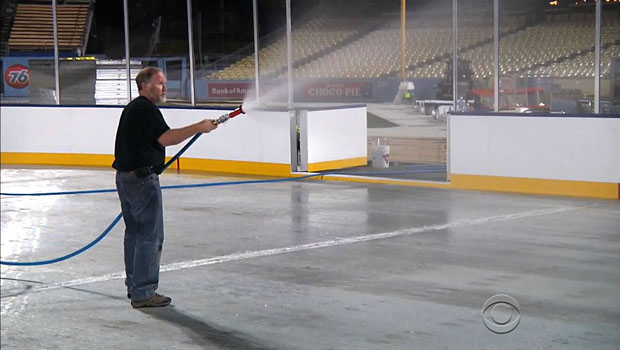 LOS ANGELES – The National Hockey League's goal in this city is to keep the ice from melting Saturday at its first regular-season outdoor hockey game in a warm-weather city.

And no one is feeling the heat as much as Dan Craig.

When the NHL planned a game in Los Angeles, what was he expecting weather-wise?

"We were expecting the weather trend is usually 62 to 68," he said.

And if he had known it would be this hot, would he have been here?

Craig is the National Hockey League's ice guru. The Canadian is in charge of the 16,000 square foot rink built on the infield of Dodger Stadium.

A time-lapse video shows the two weeks of construction.

"This engineering feat of this floor is second to none," Craig said.

Thin layers of water are frozen over aluminum panels and slowly built up to more than an inch and a half of regulation ice.  It is kept as close as possible to 22 degrees by a massive refrigeration truck, but the only thing between the ice and the sun is a reflective blanket.

What has been an ice-making nightmare for Craig has become a marketing bonanza for the NHL.

"One of the things I used to always say is it would be so cool to see our game played outdoors in L.A.," said hockey Hall of Famer Wayne Gretzky, who played for the LA Kings. "People in shorts and T-shirts enjoying our great sport."

One hundred and five thousand people watched a New Year's Day game in Ann Arbor, Mich. Snow had to be removed from that rink during the game.

The forecast for Saturday's game is 79.

Was there ever a point where Craig thought he would have to call the project?

Failure is not an option. Tickets are almost sold out.