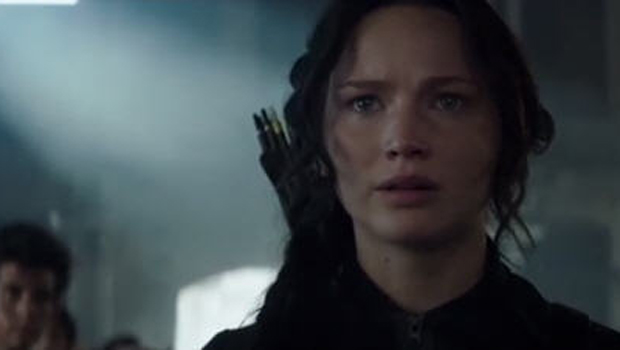 The Mockingjay is ready to fly.

The first official teaser trailer for "The Hunger Games: Mockingjay - Part 1" has arrived online, and it shows Katniss Everdeen (Jennifer Lawrence) ready to join the rebellion against the Capitol.

The trailer, which fans at Comic-Con got to see early, opens with a hovership landing and rebellion leaders Plutarch Heavensbee (Phillip Seymour Hoffman) and Alma Coin (a gray-haired Julianne Moore) discussing Katniss' role in the resistance.

"She won't be able to handle it," says President Coin. "The Games destroyed her."

"We need to unite these people out there," Plutarch counters. "She's the face of this rebellion. They'll follow her."

We also see President Snow (Donald Sutherland) declare the Mockingjay symbol illegal, and Katniss entering an underground bunker where refugees from Panem are gathering. One asks if she's there to fight with them.

"Mockingjay - Part 1" opens in theaters on Nov. 21. Watch the video below: