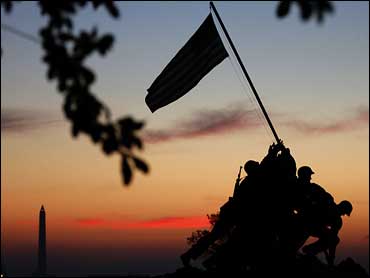 It was the morning of Feb. 19, 1945 and 19-year-old Corporal James Scotella had his orders: to invade the island of Iwo Jima.

Scotella had joined the Marine Corps just a year and a half before, and trained with his company, the 5th Division in the 28th Marines, at Camp Pendleton as a radioman. He didn't know yet that he would be fighting for his life for 36 days in one of the bloodiest battles of Marine Corps history.

Iwo Jima was a critical land grab from the Japanese Army - an island far enough into the Pacific Ocean to allow U.S. Airmen to fly to Japan and back without running out of fuel.

"I really had no fear going to shore," recalled Scotella, now 90. He remembered being about 35 minutes behind the first Marines on the sand. There was about 10 to 15 feet of beach before hitting a 20-foot mound of volcanic sand. "Every time you took one or two steps you would sink in and lose a step," he said.

Soon, the reality of what was happening came into sharper focus for Scotella.

"I didn't really have any fear until I saw the first one of our guys dead, then the fear crept in. I won't deny that I was shaken up from it, and I knew everything was for real."

Over the next four days, Scotella worked tirelessly with his company to take Mt. Suribachi. He dodged death and saw countless men wounded and killed. On Feb. 23, about 100 yards from where he was standing, Scotella said he witnessed 25 to 30 Marines raising the American flag.

"When I saw the flag, there was a lot of hoop and hollering and everybody was just elated, you know, that we finally took Mount Suribach. ... It was just very, very morale-boosting for every one of us," he said.

But that flag was not the one that lives on in history books. "The flag was awfully small," Scotella explained. "They wanted a larger one," he said, adding "the larger one was brought up and this was the famous flag that was raised by the six fellas."

Scotella remembers he wasn't able to watch it going up, but one man did.

"When Joseph Rosenthal shot that thing it was a lucky, lucky shot he got to photograph. I understand he spun around and just caught it as they were raising it," he explained.

That shot quickly became a symbol, not just of the Battle of Iwo Jima, but of the Marine Corps. Rosenthal's image was plastered across newspapers, magazines, War Bond posters and won the Pulitzer Prize. Just hours after the flag raising, Navy sculptor Felix de Weldon saw the image and immediately knew it would be a lasting image he wanted to memorialize.

According to historian Rodney Hilton Brown, the military was broke at the time and didn't have the money to commission the original sculpture, so de Weldon set out to create the sculpture with his own money and lent it to the government.

By Nov. 1945, the original sculpture was erected on Constitution Avenue, outside of what was then the U.S. Navy Department. For two years, the Iwo Jima Memorial attracted millions of tourists, but in 1947 the artist was told the statue had to come down to make way for a building.

Brown learned that since de Weldon lent it to the government, he technically owned it and was responsible for it, so de Weldon brought it back to his studio and soon forgot about it.

From the minute the first statue came down, there was major public support for a much larger sculpture. "The Marine Corps was howling and the American public was howling, not having that Iwo Jima monument," explained Brown.

In 1954, with congressional support, the larger sculpture became the current Iwo Jima Memorial, which stands outside Arlington. The original became just whispered piece of the past between Marine Corps historians.

Brown, who says he's called "the Indiana Jones of the Marine Corps," set out to find the missing sculpture. With the guidance of de Weldon, who was still living, he was led to the artist's abandoned studio in Washington, D.C. Brown sifted through the interior of the shop, looking under broken boards, and tarps -- and then he went behind the building.

"Covered in the tarpaulins was a large object," he recalled. "When I cut the tarp open with my knife and looked inside, I couldn't believe what I was seeing." In front of the historian stood the 12-foot sculpture of the five Marines and one sailor, pushing the stars and stripes into the sand.

Brown says he made a deal with de Weldon: one Stradivarius violin, a three-foot tall Newport Yachting trophy, a WWII machine gunner's knife and "an undisclosed amount of cash." All with the promise "that I would have it renovated and have it put back on display in time for the 50-year anniversary of the raising of the flag of Iwo Jima," which Brown says he did.

Sculptors who set out to repair the memorial were shocked when they saw the 50-year-old sculpture left to rot in the elements. "They said I was crazy," exclaimed Brown. "And I said, yeah - crazy for my country and I am crazy for Marine Corps, and I am going to do it."

By February 1995, it was fully restored, and had found its new home on board the U.S.S. Intrepid. But in 2008, the Intrepid went through its own restoration and the sculpture again was without a home.

In 2013, Brown put the sculpture up for auction, explaining, "It's a shame that something that is that iconic should be hidden away in a dark warehouse." Plus, he joked, "It is too big to fit in my living room."

At that time, Laura Dietz saw a notice on the auction as she was driving to a Wounded Warrior event at Camp Pendleton. When she approached the Marine base, she looked along the horizon and saw an empty hillside overlooking the Pacific Ocean.

"The light bulb went off," she explained. "I stayed up to find out who had won the bidding. I was going to pounce on them and say there was only one place in the nation that belonged: Camp Pendleton."

But at that auction, no one won. Brown says the statue was appraised at $25 million dollars, an offer came in but it was never settled on. So, back into the warehouse it went.

"Hopefully something will happen where it will go back on public display," said Brown, "When you put it out there [it] really brings tears to people's eyes."

Dietz did not give up. With the help of veterans who fought in Iwo Jima, including James Scotella, she continued her quest and founded a national initiative to raise money for Iwo Jima Monument West. The group secured the land necessary for the memorial and has plans from architect Curt Fentress, the architect behind the Marine Corps History Museum at Quantico.

The memorial, as planned, would face the exact coordinates of Iwo Jima and be enclosed in a glass structure. However, in order for the memorial to go forward, the organization still needs to raise $10 million to buy the monument from Brown and transport the monument across the country.

Brown says he has not been approached by the organization with an offer.

"If somebody like [Iwo Jima Monument West] would put it out on a Marine Corps base, I would be incredibly much more reasonable. ... I would cooperate and bend over backwards and forwards and every other direction I could to see it in good hands." But, in the meantime, he says, others have made offers.

James Scotella says he hopes a monument is built soon, "I am 90 years old. I went in when I was 18. I was on Iwo Jima when I was 19," adding, " I just hope I am living long enough to see it get to Camp Pendleton." He hopes an Iwo Jima Monument on the West Coast would attract more veterans to the area and bring awareness to what the Marines accomplished on the island.

"I feel proud when I see the flag, "said Scotella. "The 5th division started at Camp Pendleton, and we took the - we took Sirabachi," he explained. "Our outfit raised the flag so I think that's where it belongs."

Man arrested after allegedly biting off another man's nose