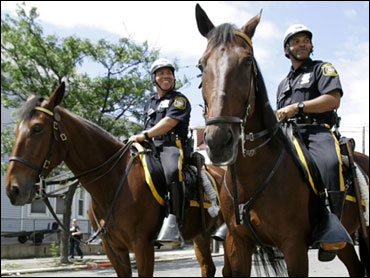 The sound echoed throughout Montefiore Medical Center, like somebody pounding dozens of nails around the clock.

The source was actually a pill banger, used to crush medications for geriatric patients who can't swallow whole pills.

The process occurred repeatedly during each shift, disrupting sleeping patients and annoying employees. It was finally replaced by a pill grinder, more pepper mill than hammer, part of a noise-reduction campaign that includes rubber wheels on instrument carts, soft-soled shoes and posters reminding staff members, patients and visitors to pipe down.

Margaret Amato, clinical director of nursing at Montefiore, said research has shown that the noise level during the change of shift at a hospital can reach an unhealthy 113 decibels.

"Whereas a motorcycle is 95 decibels, for example," Amato said. "We at Montefiore are trying to get in the 50 to 60 range."

Hospital noise is not a new complaint. A 2004 study at the Mayo Clinic in Rochester, Minn., found that noise-reduction efforts as simple as closing the door to a patient's room resulted in cutting the peak decibel level to 86 and the average to 42, quieter than a library.

Experts say the problem is worldwide.

"Hospital noise levels are far too high internationally, and this has been known for decades," said Roger Ulrich, a professor of architecture at Texas A&M University and a visiting professor at University College in London.

He recently worked on a study of cardiac patients at a Swedish hospital and found that patients in rooms with sound-absorbing ceiling tiles were less likely to be readmitted within 30 to 60 days than those in rooms with the typical hard, sound-reflecting tiles.

"The cost of readmission for a cardiac patient is very high," he said. "Preventing one or two readmissions would save so much money that that alone would pay for the cost of upgrading the acoustic ceilings throughout the cardiology floor."

Ilene Busch-Vishniac, a professor of mechanical engineering at Johns Hopkins University, said that major sources of hospital noise include heating, ventilation and air conditioning systems — things that are part of a building's design — and that "administrative solutions" like mandating rubber-soled shoes have a limited effect.

"They work for very short periods of time, and just a little while later everyone's back to doing what they were doing originally," she said.

At Montefiore, a teaching hospital in the Bronx, the anti-noise campaign includes both the administrative measures mentioned by Busch-Vishniac and structural improvements that are part of ongoing renovations.

Elodia Mercier, an administrative nurse manager who implemented the program, said that in addition to replacing pill bangers and hard plastic cart wheels, changes include instituting a computerized drug-dispensing system.

In addition, the ring volume has been turned down on telephones and TVs have been fitted with headsets.

"Our goal is not to eliminate noise, because we can't," Mercier said. "Our goal is to decrease noise when and where possible."

More changes are in store at an eight-story facility — part of Montefiore's interconnected cluster of buildings — that is being renovated floor by floor.

Instead of the overhead paging system that patients now use to call for help, each nurse will be summoned individually with a beeper-like device.

Stanley Fine, interior designer for the hospital, said floors will have soft vinyl tiles, walls will be covered with fabric and even single-bed rooms will have curtains.

"Any fabric you add to the room helps absorb sound," he said. "We're doing everything possible to keep the patients comfortable."

But even during a visit to a ward that will be closed when patients are moved to the renovated building, the atmosphere seemed calmer than is typical at many hospitals. There was no shouting, no clatter of hard wheels on hard floor, no buzz of doctors and nurses being paged.

Mercier took out a device for measuring decibels. "Fifty, she said. "Before we were in the 70s and 80s."

Patient Lillette Wilson, 53, said she had noticed the difference.

"The noise in the hospital is limited," she said. "It's gone down. I feel if you're sick, you need quietness to heal."