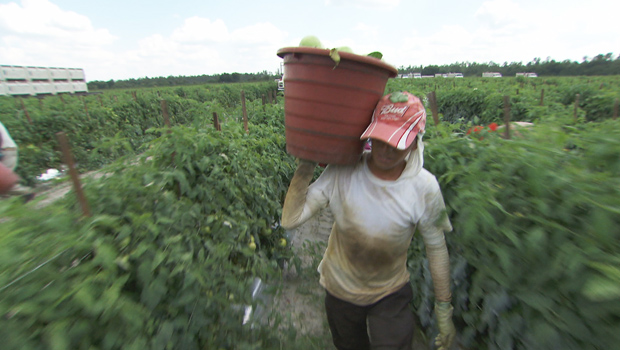 At what cost to farm workers do we enjoy our fruits and vegetables? Are we willing to pay a little more at the checkout counter to better their lot? It's a question that's been on the national agenda for over half a century now, as Mark Strassmann reports in our Cover Story:

"They are the migrants, workers in the sweat shops of the soil."

Millions of Americans saw, for the first time, third-world squalor in America.

As Murrow reported, "One farmer looked at this and said, 'We used to own our slaves. Now we just rent them.'"

Americans were so horrified, Congress passed new labor laws. But little changed. America's farms kept producing harvests of shame, as Dan Rather reported from Florida in 1995.

"These are still the forgotten people. Conditions for them are still awful," he said.

There are still about a million migrant farm workers in the U.S. The population of towns like Immokalee, Fla., swells every winter when migrants and their families move here looking for work.

"There's a lot of mistreatment going on," said Gerardo Reyes. "A lot of intimidation from the bosses."

Reyes, a native of Mexico, came to Immokalee to pick crops in 1999. Farms in Florida grow 90 percent of the tomatoes we eat in the winter.

Pickers move from farm to farm and crop to crop with the seasons. But according to Reyes, tomatoes were the worst. "Tomatoes is where most of the worst conditions are happening, or were happening," he told Strassmann.

Labor activist Greg Asbed came to Immokolee in 1993. "When we were first here, it was a very brutal community," he said. "There were wage thefts, sexual harassment, violence. I mean, you would come out here on Friday in the evening for payday. People would get their checks right outside the office. And it was not uncommon to see somebody get beaten up by a boss, and their crime would usually be because they thought they got underpaid."

For seven years, the CIW tried marches and strikes. But tomato farmers refused to talk to them.

And then they changed tactics. "Yes, because you beat your head against the wall long enough and you decide that that hurts," Asbed laughed. "And you want to find another way to get around the wall. And if there is a way to get around it, you do."

In 2000, the CIW began pressuring the top of the tomato chain -- fast food and grocery chains, the buyers with clout. In 2005, Taco Bell became the first big buyer to sign on to CIW's Fair Food Program. Buyers agree to pay an extra penny per pound for tomatoes -- money that goes to workers. And buyers only do business with participating Florida farmers.

More than a dozen restaurant chains and retailers have signed on, including McDonalds, Chipotle, Trader Joes, and last year Wal-Mart, which sells 20 percent of America's tomatoes. Wal-Mart's joining was featured in the 2014 documentary, "Food Chains."

"We believe that by signing up to the Fair Foods Program, that we can have a major impact on the sustainability and the viability of the whole supply chain," said Wal-Mart Senior VP Tom Leech.

Strassmann asked, "When Wal-Mart, known as a tough labor negotiator, signed on, did that give you a whole new level of credibility and influence?"

"It helped send the message to the industry that this program is not going away, that it's only getting stronger," said Asbed.

Farmer Jon Esformes signed on first. "It was the right thing to do, quite frankly," he said. "I was asked when we first signed, 'Why are you doing this now?' And I said, 'Because I didn't do it 10 years ago.'"

"How long ago should it have happened?" asked Strassmann.

"It should have happened 150 years ago."

"There was no question in my mind that bad things were happening in agriculture and on farms, not just my own, but farms across the country -- things that I did not know about and had no mechanism to find out about," said Esformes. "This gave me the tool."

That tool is the Fair Food Standards Council, an independent group that inspects participating farmers and holds them accountable.

Along with the penny premium, growers must have zero tolerance for forced labor, child labor, and sexual harassment. Other standards, such as mandated shade and mandatory worker training, go beyond what is legally required.

"We have, over four seasons, virtually eliminated the worst actors who were responsible for any kind of abuses of that type."

But challenges remain. Only a few supermarket chains have signed on to the program. For instance, Florida's largest, Publix, has not. In a statement, the company says it's not their place to get involved in the labor disputes of its suppliers:

"We expect our suppliers to follow the laws established to protect and promote a safe and healthful workplace for their employees," the company said. "We believe all parties would be better served if appropriate wages were paid by growers to their workers, and we were charged accordingly."

But the CIW hopes that socially-conscious consumers will look for the new logo (left). Some Whole Foods stores now display them, with Wal-Mart and others soon joining.

So far, that choice has generated almost $20 million for workers on participating farms.

To a typical Florida tomato picker, it means an extra $60 to $80 a week. But nationally, more than half of all farm workers make less than $20,000 a year, and a quarter live below the federal poverty line.

According to Matt Rogers, a Whole Foods produce coordinator, "A relatively small impact on cost can have a really large impact on the people who are doing this work on the farms. One of the big conversations right now with the folks who started the Fair Food Program is, 'What's next?' They've done an excellent job on tomatoes in Florida, and it's a great model. It shows great potential. So now, what's next?"

The program is expanding, slowly. This summer Fair Food auditors began visiting farms in five more states, and in November they will begin visiting the fields of another big Florida export: bell peppers.

Fifty-five years after "Harvest of Shame," Gerardo Reyes sees something new growing in these fields.

"It's a completely different world," he said. "When you think about agriculture and the way in which all of the abusive conditions happen in every crop, basically, when you see how this is working and why it is working, yeah, it gives us a lot of hope."