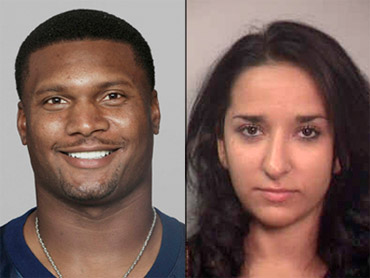 (AP)
Photo of Steve McNair, left, in a 2003 season photo and Sahel Kazemi in an undated booking photo.

NASHVILLE, Tenn. (CBS/AP) NFL star Steve McNair was found murdered on the Fourth of July in a Nashville condominium. The killer put four bullet holes in his body - two in the head and two in the chest. McNair's 20-year-old girlfriend lay dead beside him. A gun was found under her body.

Who killed Steve McNair? Was it a murder suicide? Police aren't saying at this point. But the shocking turn of events has left family, friends, and his wife, hoping that people will remember the football great for his accomplishments rather than his demise.

On the field, McNair earned the respect of his fellow NFL players for shaking off defenders and injuries. That same blue-collar playing style won the love of fans amazed at how the quarterback kept showing up for work — and winning.

He endeared himself more with his charity work. Not just from the checks he handed out, but for throwing himself into the efforts, like he did when loading boxes onto tractor-trailers bound for Hurricane Katrina victims.

Publicly, McNair was a happily married man and proud father of four sons who split his time between his Mississippi farm and a home in Music City, where celebrities are cherished, not hassled.

But his murder has thrust a darker side of his private life suddenly into the spotlight.

"People have certain things that they do in life," said McNair's longtime friend Robert Gaddy, who called 911. "We don't need to look on the situation at this time (but) on the fact we just lost a great member of society."

Even McNair's longtime agent said he didn't know about the former quarterback's relationship with Saleh Kazemi until news broke of the deaths. Now police call McNair the victim of homicide, though they aren't yet ready to label Kazemi's death a suicide despite her single bullet wound to the head.

"As good as he was on the football field, that couldn't touch the person," agent Bus Cook said Sunday, still shaken by McNair's death. "I mean it just couldn't."

Hints of a problem with alcohol surfaced in May 2003 when a Nashville cop pulled McNair over on suspicion of drunk driving. Police said the quarterback's blood alcohol content was .18 percent — well over Tennessee's legal limit. He also was charged for having a 9mm weapon with him, but all the charges were later dropped.

McNair was charged with drunken driving in 2007 because he let his brother-in-law drive his pickup truck. Those charges were later dropped when the DUI charge against the brother-in-law was reduced to reckless driving.

And McNair could have been charged again Thursday night when the same officer who arrested him in 2003 stopped a 2007 Cadillac Escalade driven by Kazemi and registered to both her and McNair. Kazemi was arrested on a DUI charge, and he was allowed to leave in a taxi.

Dr. Sherry Blake, a clinical psychologist who practices in the Atlanta area, has counseled athletes and entertainers about the temptations of easy drugs, alcohol and women. She talked Sunday about the challenges even for those with strong family ties, though not about the McNair case specifically.

"Individuals can't get enough of the limelight. It's easy to have people telling you how great and wonderful you are rather than otherwise," Blake said.

"The sad part is many times the public likes to be close to you not because of who you are but what you do."

Police labeled his death homicide Sunday, revealing McNair had been shot four times — twice in the head, twice in the chest when found in a rented condominium he shared with a longtime friend, Walter Neeley. Police found a semiautomatic pistol under Kazemi's body.

But police spokesman Don Aaron said they were reviewing every possibility, interviewing friends of both and an ex-boyfriend before labeling Kazemi's death.

On the football field, he simply was "Air McNair," a winner.

He played 13 NFL seasons starting with the then-Houston Oilers, led Tennessee to its famous last-second 2000 Super Bowl loss to the St. Louis Rams. He ended his career in Baltimore last season, after being traded away by the Titans after they drafted Vince Young as a replacement to the aching and expensive veteran.

A four-time Pro Bowler, he shared the NFL's MVP award with Peyton Manning in 2003.

"Many of our defensive players talked about what a huge challenge it was playing against him," Manning said in a statement. "He and I had some great battles against each other."

McNair never acknowledged any of his numerous injuries on the field, even in one game when the painkilling shot wore off before he drove the Titans to a touchdown and ran in for the tying 2-point conversion. Then he led them to the winning field goal.

Young called McNair, a father figure since Young was a teenager, "Pops."

"I hear his advice in my head with everything I do. Life will be very different without him," Young said in a statement.

McNair's friends want the quarterback to be remembered for his generosity. He gave away turkeys and checks in Tennessee, toys in Baltimore and paid for three football camps himself this year. Cook talked to someone Saturday who saw McNair cleaning up the field after one camp at Southern Mississippi.

"That was Steve McNair. That's who he is. And who he was," an emotional Cook recalled.

Cook described Mechelle, who married McNair in 1997, as "very upset, very distraught." Funeral arrangements could be completed Monday with some of McNair's family coming to Nashville to assist planning.

McNair met Kazemi at the Dave & Buster's restaurant where she worked as a server and where his family ate often. The two began dating a few months ago in a relationship that included a vacation with parasailing. Photos posted on TMZ.com showed McNair gazing and smiling at the young Kazemi.

"She pretty obviously got mixed up way over her head with folks," said Reagan Howard, a neighbor of Kazemi's.

A man who answered the door at a house in the Jacksonville, Fla., suburb of Orange Park said it was the home of Kazemi's family, but said her relatives did not want to comment.

"We don't have anything to say, please leave us alone," he said.

The victim's sister, Soheyla Kazemi, told the Florida Times-Union in Jacksonville that the young woman had expected McNair to get a divorce. "She said they were planning to get married."

Nashville courts had no record of a McNair divorce case, but a home he owned in Nashville is on the market for $3 million.

The real estate agent declined to comment. Her online listing for property described it as a "gigantic house" of more than 14,000 square feet and photos showed a pool, home theater, baby grand piano and ornate furnishings throughout.

Kimberly Hardy visited a restaurant McNair recently opened near Tennessee State University to provide healthy, affordable food for college students. The Nashville woman said McNair had been nice to her the handful of times she met him. She said she hated what had happened to him.

"But I do think that all the greatness he accomplished will endure forever," Hardy said.