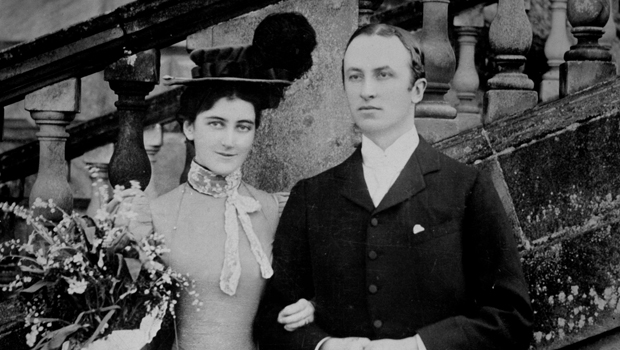 The gilded girls of America's so-called Gilded Age sometimes looked across the sea for something American men can't offer: a title. Their search is being remembered these days on our TV screens. Here's Jan Crawford:

It's one of "Downton Abbey"'s central plotlines: Cora Lady Grantham (played by actress Elizabeth McGovern) was once Cora Levinson, heiress to an American fortune. She marries Lord Grantham, a British aristocrat, and saves his crumbling estate, claiming the title of Countess for herself.

Violet, Dowager Countess of Grantham: "Twenty-four years ago, you married Cora against my wishes for her money! Give it away now -- what was the point of your peculiar marriage in the first place?"

The point, of course, is obvious: Money and status.

In the show their romance plays out like a fairy tale -- and that story line isn't all that far-fetched.

Lady Cora is an example of what came to be known as the "Dollar Princesses" of the Gilded Age: A time in the late 19th century when young American heiresses -- rich with new money and rejected by established high society -- turned their sights to Europe, seeking status through marriage and lofty European titles.

"The heiresses, I'm sure, found the appeal of wearing a tiara or being presented at court an amazing fulfillment of a dream -- if not theirs, their mothers' perhaps," said Jeff Groff, a curator at the Winterthur Museum in Delaware. It's the former home of America's own brand of royalty, the du Pont family.

A just-ended exhibit of "Downton Abbey" costumes drew record crowds, highlighting America's fascination with all things British, both now and then.

Groff said what was so interesting about the many real-life Coras during the Gilded Age was that, "So many of the great American fortunes were in manufacturing, railroads, finance, trade -- things the British aristocracy would normally turn up their nose up in the air about."

While America was finding new fortunes, Europe was facing hard times -- and a once-thriving British upper-class was feeling the impact.

"They're trying to hold on, and they're looking at leaky roofs and properties in bad repair, and wondering, 'How are we going to keep this together?'"

And they found salvation in the same young women shunned by the American elite.

Last week the Smithsonian Channel (which is partly owned by CBS) began a three-part series on these transatlantic unions, "Million Dollar American Princesses," depicting the lives of real American heiresses of the Gilded Age, like Jennie Jerome -- daughter of a Wall Street tycoon, and the mother of Prime Minister Winston Churchill.

Jennie might have lacked the social credentials to make it in New York, but in England she had critical advantages over her local rivals, including a huge amount of confidence received from growing up being told she's wonderful and beautiful.

Many of these young women, with their confidence and outspokenness, made an impact on British society that continues to this day. Princess Diana's great-grandmother, Frances Work (later the Honorable Mrs. Frances Burke-Roche), was the daughter of another Wall Street millionaire.

Hundreds of women made the transatlantic journey to find the man with the title of their dreams.

Groff said there were matchmakers in society, in the U.S. and England, who would help put people together.

There were a few must-reads of the era. One publication for the American heiress was a quarterly journal called "Titled Americans." It listed the great Anglo-American matches already made, and the names of titled men still on the market.

Sort of the match.com of the era. Very practical, not at all romantic.

On this list of aristocratic bachelors is famed British banker, the Honourable Lionel Rothschild: 22 years old, heir to the Rothschild estates, an enthusiastic zoologist. Not a bad catch if you like that kind of thing.

And (not for the feint of heart) the 12th Earl of Devon and his 53,000 acres of a heavily-mortgaged estate. "Lord Devon, who is 48 years of age, was formerly a captain in the army and a Member of Parliament; has sown wild oats extensively."

But with a home like Powderham Castle, maybe someone would be willing to take him on.

But despite the dream of the title and the romance so beautifully depicted on television, life wasn't always so luxurious for the new ladies of the manor, who'd grown accustomed to things like heat and electricity.

The exhibit at Winterthur contrasts the difference between the American and British estates, such as the elaborate bell-pull system used at Downtown Abbey to call servants, versus the electric call system in use at the same time period by the du Ponts in America.

Modernization -- not easily adopted by the old-fashioned British elite.

But some real-life Coras were not so fortunate.

Jennie Jerome spent most of her marriage without her husband, who later died, reportedly of syphilis.

Princess Diana's great-grandmother divorced and returned to America when her father threatened to cut off her funds before that noble husband of hers gambled them all away.

With the coronation of King George V in 1911, the tide began to turn on the "Dollar Princesses" and their modern ways. The new monarch frowned on the unions, and the doors of the grand old estates -- once flung wide open -- soon began to close.

But back home her future looked much brighter. All that new money wasn't so new anymore. The Dollar Princess, with or without a glamorous title, was not only welcome in high society; now SHE was sending the invitations.