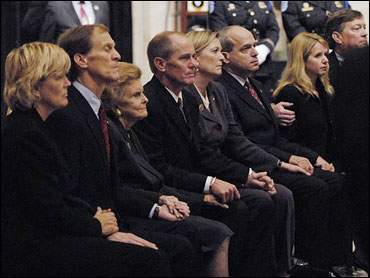 It was a simple but extraordinary gesture: Gerald Ford's children, standing in the Capitol Rotunda hour after hour this weekend, greeting mourners one by one.

Throughout several days of public mourning, all four siblings have been side by side in dignity, honoring the man who was their father first and always, even after assuming the title of president, CBS News correspondent Thalia Assuras reports.

On that day in 1974, their lives changed completely — and, unlike most children of presidents, unexpectedly.

Michael, the eldest, had married that summer and tried his best to avoid the White House limelight. But with the others, Gerald and Betty Ford faced their children's youthful experimentation in a media glare.

"They were just like everybody else," said Sheila Rabb Weidenfeld, Betty Ford's press secretary. "And that was really important, not just for the rest of America, but for the kids."

Jack dated celebrities, including Bianca Jagger, and famously raised eyebrows when he admitted smoking pot. Steven fled almost immediately to hit the rodeo circuit. Susan, the youngest, held her senior prom at the White House. She was later rumored to be dating a married man — but also took on White House hostess duties while her mother battled breast cancer.

"Her mother brought her up to do that, not because she ever thought she'd be in the White House, but because Susan had the maturity to be able to do it," Rabb Weidenfeld said.

Steven is an actor, with film credits that include "When Harry Met Sally," while Susan, divorced and remarried, is a professional photographer who also helps run the Betty Ford Center.

A wife, husbands and parents, they are like so many baby boomers who have fulfilled their dad's wish — to turn out well.

Should people be charged for being rescued?