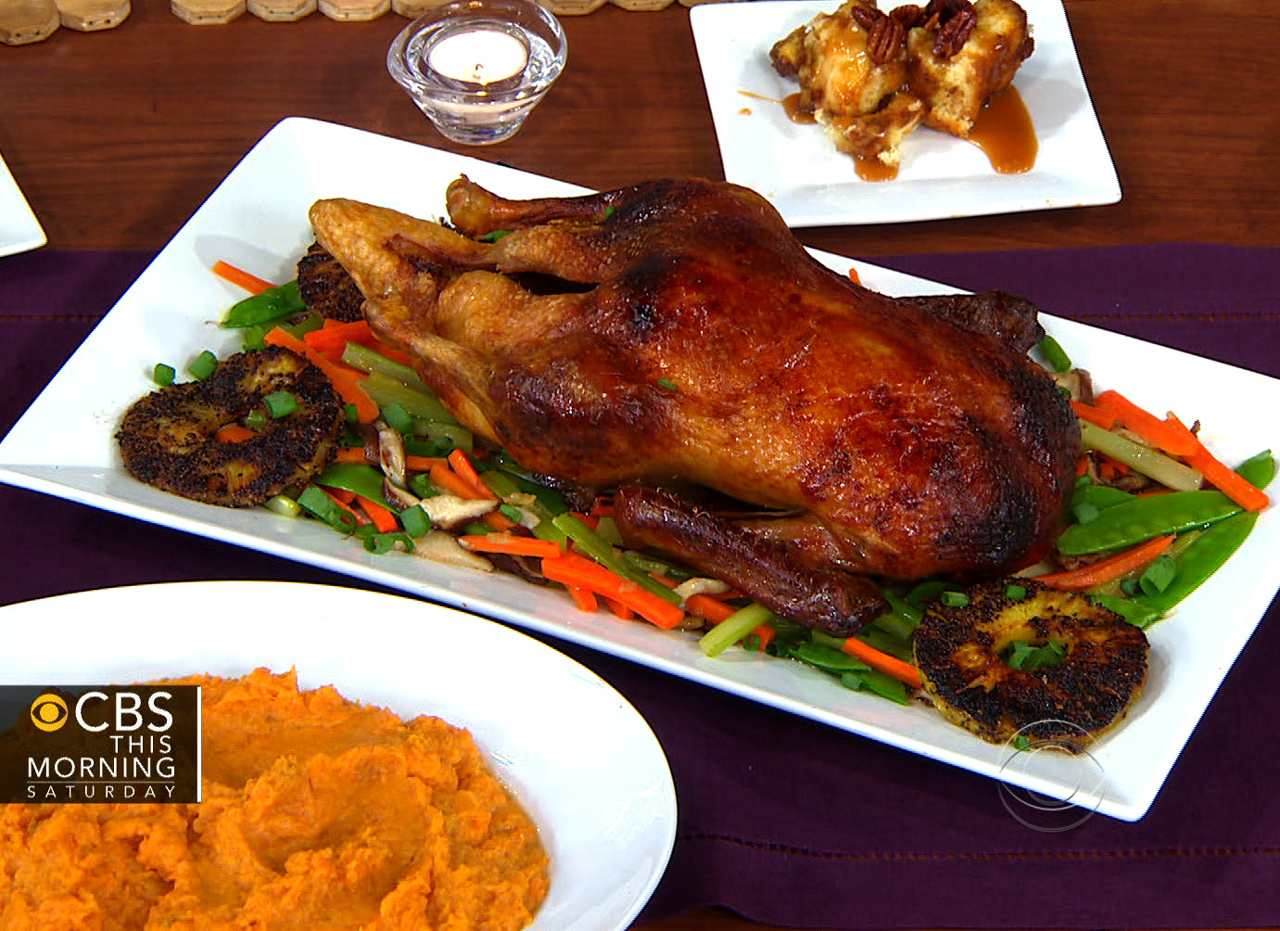 (CBS News) NEW YORK - World-renowned chef and cookbook author David Burke is known for his innovative and creative approach to cooking. He is the executive chef and owner of seven restaurants, including David Burke Townhouse and David Burke Kitchen, at The James, in New York City. He has been inducted in to the "Who's Who of Food and Beverage in America" by the James Beard Foundation, and has also received the Contribution to American Cuisine award by star chefs. He is also the author of two cookbooks, "Cooling with David Burke" and "David Burke's New American Classics."

On "CBS This Morning: Saturday," Burke offered the recipe for his ultimate dish: Roast Duck with Sweet Potato Puree and Garlicky Spinach.

Combine the soy sauce, honey, water, cilantro, garlic, star anise, and ginger in a deep, non-reactive container large enough to hold the 2 ducks. Add the ducks, making sure that they are covered with the marinade. Cover and refrigerate for 12 hours.

Preheat the oven to 325 degrees.

Remove the ducks from the marinade and place them on a wire rack in a roasting pan. Cover with aluminum foil and place in the preheated oven. Roast the ducks for 1 hour, or until the skin is crisp and an instant-read thermometer inserted into the thickest part reads 165 degrees. If the skin is not crisping, lift off the aluminum foil for the last 15 minutes of roasting.

Place the marinade in a small saucepan over medium heat and bring it to a boil. Immediately remove it from the heat and set aside.

About 15 minutes before the ducks are ready, prepare the stir-fry. Heat the oil in a large wok over medium-high heat. Add the shallots and minced garlic and allow them to sweat for about 4 minutes, or until the vegetables are translucent. Add the minced ginger and saute it for about 2 minutes, or just until the ginger has softened slightly. Add the onion, celery, and carrots and stir-fry them for 2 minutes. Raise the heat to high and add the mushrooms and chicken stock. Stir-fry vigorously to help the liquid evaporate. Add about 1/4 cup of the reserved marinade and again stir-fry vigorously to deglaze the pan. Stir in the snow peas and remove the mixture from the heat. Stir in the chopped scallions along with salt and pepper to taste.

Using a chef's knife, cut the duck into eight pieces; 2 thighs, 2 legs, and the 2 breasts cut in half. Place a mound of the stir-fried vegetables into the center of each of six dinner plates. Place a piece of duck on top of the vegetables and then a pineapple ring on top. Drizzle some of the reserved marinade around the edge of the plate and serve immediately.

For more of Floyd's recipes, go to Page 2.

Using a chef's knife, slice off the top and bottom of the pineapple to make a smooth, even cut on each end. Peel the pineapple and, using the end of a vegetable peeler or the point of a small knife, carefully remove all of the eyes. Cut the pineapple crosswise into 6 1/4-inch-thick slices of equal diameter, reserving the remaining pineapple for another use. Using a 1-inch-round cookie cutter, remove the center core from each slice.

Place the pepper in a small plate and, working with one slice at a time, dredge both sides of each piece of pineapple in the pepper and season with salt to taste.

Place the oil in a large saute pan over medium-high heat. When it is very hot but not smoking, add the seasoned pineapple rings. Sear them for 3 minutes, or until golden, without shaking the pan or moving the slices, which can dislodge the pepper. Turn and sear the other side for about 3 minutes, or until well caramelized.

Using a slotted spatula, transfer the caramelized pineapple rings to a double layer of paper towels to drain. Serve warm.

Heat the clarified butter in a large saute pan over medium heat. Add the spinach and garlic and saute for about 4 minutes, or just until the spinach has wilted slightly and the garlic has taken on some very light color. Season it to taste with salt and pepper.

Preheat the oven to 350 degrees.

Place the sweet potatoes in a medium saucepan. Add cold, salted water to cover the potatoes by 1 inch. Bring to a boil over medium-high heat. Lower the heat and simmer the potatoes for about 15 minutes, or until they are tender when pierced with the point of a sharp knife. Drain well. Transfer the potatoes in a single layer to a nonstick baking sheet.

Place the sweet potatoes in the preheated oven for 5 minutes, or just until their exterior is quite dry. Transfer them to the bowl of a food processor fitted with the metal blade.

Split the vanilla bean lengthwise and, using the edge of a paring knife, scrape the seeds into the sweet potatoes. (Do not discard the bean. Save it to flavor sugars, teas, or beverages.) Add the butter and milk and process to a smooth puree. Season to taste with salt and pepper. Transfer the puree to the top half of a double broiler over very hot water. Cover and keep it warm. (The puree may be made up to 3 days in advance; and stored, covered and refrigerated. Reheat it as above or in a microwave oven.)

For more on these recipes, watch the video in the player above.