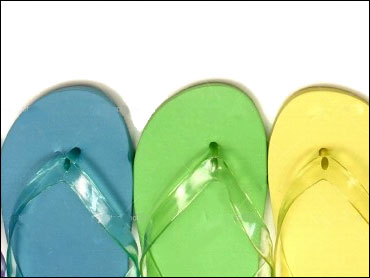 Flip flops are a summer fashion favorite - but the grime on your feet after wearing them could contain some dangerous bacteria.

Lab tests on the flip flops found E.coli, staphylococcus aureus - which is all over our skin - and fecal matter. None of this is a big surprise, according to CBS News medical correspondent Dr. Jennifer Ashton.

Ashton reminds us that the vast majority of people used to walk around barefoot before the flip flop was created and they were fine.

If you have a healthy immune system, bacteria found on flip flops does not pose any significant danger.

"If you have a big laceration or cut on your foot or if you have a weakened immune system, [use] common sense - wash it with soap and don't walk around with open-toe shoes or flip flops," she said.

Ashton said it should not be a shock to anyone that bacteria are collected on flip flops - because germs are everywhere.

"Have there been people who have gotten some pretty bad skin infections because they've been wearing flip flops or walked barefoot? Sure," she said. But Ashton warns that cell phones are loaded with bacteria, too.

Ashton said in her optinion, food poisoning, which can contain bacteria, is a more significant health risk than germy flip flops.

"We can't lead our lives in a sterile environment, and this is a perfect example to illustrate that," she said.

How to Talk to Senior Parents About Driving